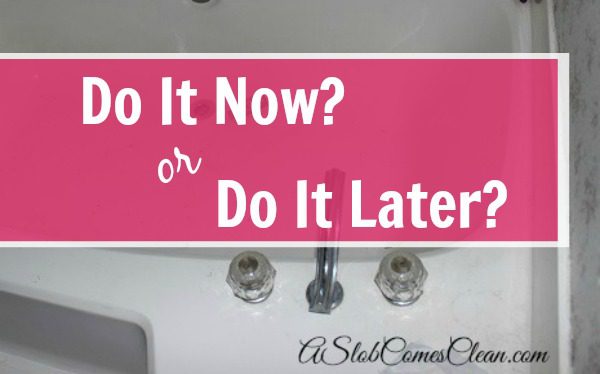 I’m pretty sure “Do it Now or Do it Later” was a phrase my mother said to me as a child.

So I guess I should give up on the dream that my children will take all of my motherly advice to heart and avoid life’s struggles.

The phrase came to my head on Sunday afternoon as I vacuumed. I had procrastinated as LONG as I possibly could.

I was leaving in less than an hour to direct a rehearsal, and within minutes of returning home, our doorbell would ring.

Last week, all week long, I used the excuse that I was behind because we were out of town on Monday.

Can there be any better excuses for letting ALL other housework slide???

Except that it has to be done. At some point.

I waited until Sunday afternoon when I had less than an hour. We ran around and picked stuff up and I wasn’t 100% kind and loving to my family.

Do it now or do it later. Doing it now is my goal for this week. I cleaned bathrooms yesterday because it was Tuesday and Tuesday is Bathroom Cleaning Day.

And doing it Tuesday was doing it “now.”

So later (on Sunday afternoon, the ONLY time I allow myself to take a nap) I can just do a little wipe down of the guest bath and I’ll be ready to open the front door.

Do it now or do it later.