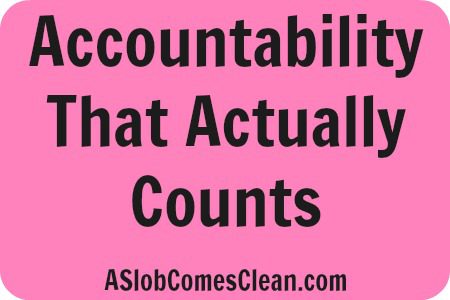 I set up this blog as a way to stay focused and hold myself accountable. In so many ways, that has worked.  But truthfully, it’s not the best kind of accountability.

Part of what I’ve committed to do here is to be truthful. To bring the ideals into reality and be honest about how things really work.

This blog as an accountability system is great, except that I can stop posting any time I choose.

Even if I received emails or phone calls or Facebook messages from people who cared and wanted to hold me accountable, I could ignore all those things.

I could delete my email account or change my phone number and never get bugged again.

Real accountability happens with the people who are directly affected by what I do and don’t do. The people who live with the habits and routines and systems I’ve developed.

Last night, I was tired.

I decided I was going to wait to start Laundry Day on Monday morning. Technically, that wasn’t a total cop out.

But I know that the best way for Laundry Day to happen, from beginning to end before Monday is over, is to start on Sunday night.

If the whole family gathers and sorts laundry on Sunday night and I start ONE little ol’ load before I go to bed, I’m pretty much ensuring success.

I know this, but I just didn’t feel like it.

I was tired. The kids were tired.

We’d had a VERY busy weekend that included abnormally early mornings on both Saturday and Sunday. I was determined the kids would be in bed early.

I HAD emptied the dishwasher and reloaded it, catching up from getting off my dishwasher rhythm over the weekend.  That’s noble, right? Isn’t that enough?

I even knew Monday morning would stink if I waited. I’d be stuck gathering and sorting laundry by myself, and it would take five times longer than if the five of us did it together.

But I had decided I didn’t care.

Then Hubby said, “Don’t you need the kids to sort laundry before they go to bed?”

And it took less energy to say yes than to explain how I had purposely decided to forget to have them do it.

And I realized that is what real accountability is.

It is people who know you, who see you doing what you’re supposed to do for long enough that they notice when you’re not doing it.

Accountability doesn’t come from the planning of routines, it comes from the observation of routines.

It comes from the people who count on those routines.

From the ones who wake up in the morning expecting to find clean undies and clean shirts and clean socks.

And even though I groaned inwardly last night when bedtime was delayed by a whole less-than-ten-minutes . . . I’m incredibly thankful for that accountability this morning.

Because it’s not even lunch time yet and I only have two loads left.