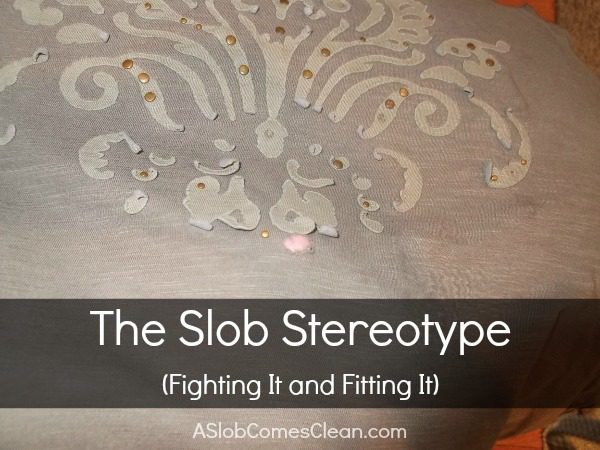 I find myself cringing when I hear the word “slob” being used.

It’s not used positively, and it’s not supposed to be.  The dictionary includes “an insult” as part of the definition.

Pre-blog, I never cringed when I heard the word, but that was because I didn’t think of myself as one.

A big part of my process has been my dedication to being completely honest and the acceptance of how my brain works. Using the word “slob” has been crucial in all of that.

But I still feel my face flush and my neck prickle when someone casually mentions something about a slob.  Usually, they’re referring to a person with stained/hole-y clothing who is sitting on a couch and drinking chocolate milk from the bottle while watching the sci-fi channel.

Personally, I’m not into sci-fi, don’t get to watch much TV at all EVER until after 9 p.m. (and my bedtime is 10!), and I’m allergic to chocolate thank-you-very-much!

But the holes in the clothes?

Ummmm, I probably would have acted offended and horrified at that stereotype a few months ago.

But then . . . I wore that shirt in the picture above.

I LOVE that shirt.  It’s just the boring-and-neutral color I love to wear on an I-don’t-feel-all-that-great-what-day-of-the-month-is-it kind of day.  And it fits.  Like in a fitted-but-doesn’t-show-every-roll-when-you-sit-down kind of way.

However . . . with all the doo-dads and design, it somehow got little holes in it right away.

Right away = three years ago when I bought it.

And over the past three years those little holes have grown bigger with every wash.

But I still kept pretending they weren’t noticeable.  Even though I knew in my heart that they were.

Here are my thoughts on why the holes-in-the-clothes stereotype exists:

Slobs are nice people.  We look beyond the facade of perfectly hole-less clothing.  We see the beauty of the item over the flaws.

In spite of the flaws.

I saw the big picture of that wonderful, comfortable, roll-covering, perfect-neckline shirt.  I didn’t dismiss it because of a (few) measly little hole(s).

Clothes like this make me think of my quirky, artsy, sometimes-smelly college theatre friends.  I LOVE those people.  Passionately.  And though most have “issues” I accept them completely with all flaws included.

And as I occasionally have the opportunity to work with other theatrical-type people, I find that they also tend to be flawed, but awesome.  And accepting.  And willing to overlook MY flaws and love me anyway.

And (yes I’m carrying this out), I’m constantly amazed at the readers here at A Slob Comes Clean who not only identify with my Slob Issues, but also have backgrounds in theatre or some other ultra-creative endeavor.

And it confirms my belief that part of who I am (the part that sees the world differently and ignores the bad in order to focus on the good) is directly related to the other part (the part that convinces myself no one notices the pasty-white-quarter-inch of belly showing through the now-a-quarter-inch-big hole in my shirt).

I’m not really sure where I’m going with this.  I threw away the shirt.

I’m at the point where I’m able to combat my Slob Vision enough that I wake up and realize I’m too old to wear a shirt with a big ol’ hole in it.

Even though I love it.

But I don’t ever want to get to the point where I see someone’s frizzy hair or lack of make-up or ten-year-old Birkenstocks instead of seeing their heart.

Oh.  And just in case you’re thinking I’m making a big deal out of the fact that a favorite shirt had a tiny-little hole in it . . . here’s another shirt I got rid of during the Master Bedroom Saga: 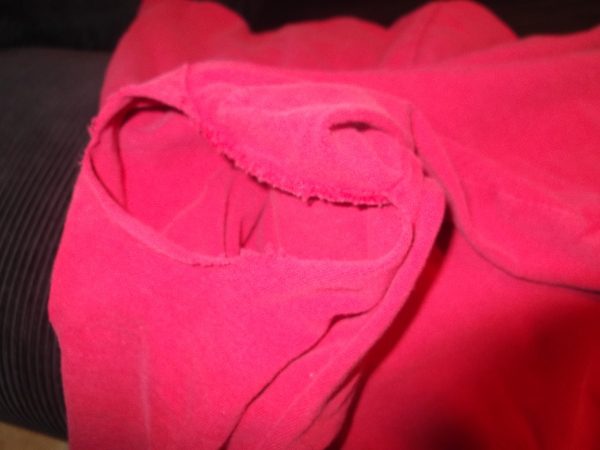 Yep.  That’s a six-inch hole in the armpit of a t-shirt I bought when Hubby and I went to Disney World for our first anniversary.  12.5 years ago.  And the hole has been there (at increasing measurements) for at least six years?  I ignored some serious flash-risk with that one. 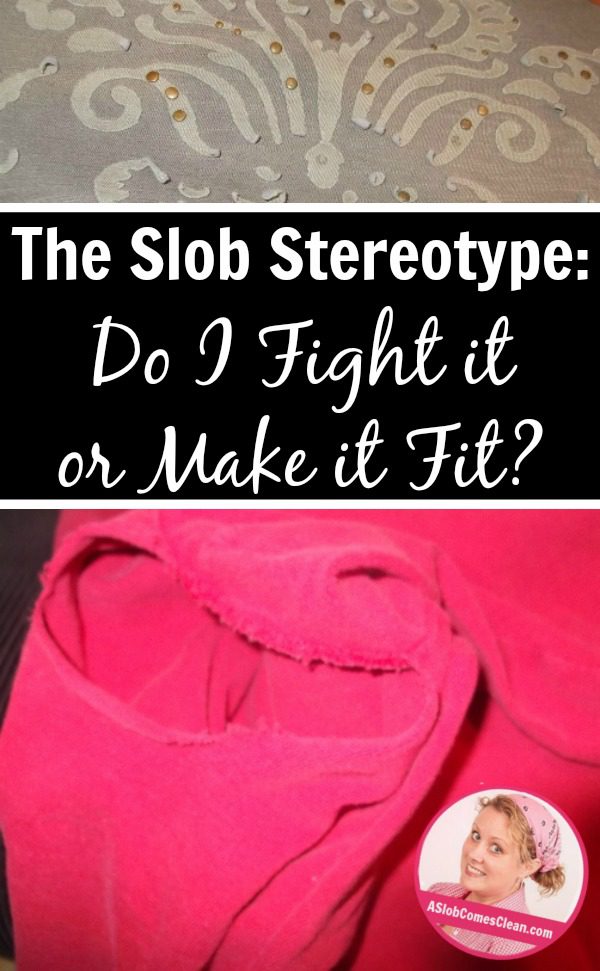