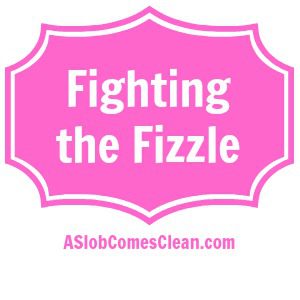 In the second week of January, we implemented Family Kitchen Clean Up Time.

It has been a success.

Every night we’ve been home, we’ve cleaned the kitchen together.  My 6yo daughter is officially our Lunch Maker, and my 11yo has improved his dishwasher-filling skills significantly.

Honestly, doing Family Kitchen Clean Up hasn’t been difficult.  You know I have focused on teaching my kids cleaning skills, so there really hasn’t been much instruction needed.

It’s simply a matter of creating a habit.

And that’s where the struggle comes in.

I fear the fizzle.

I fear it because I know it.  I have experienced the fizzle oh-so-many times.

I determine to change.  I make a plan.  I implement the plan, love the plan, declare t0-the-world the loveliness and life-changing-ness of the plan.

And then suddenly, I realize it has been three weeks since I even thought about the plan.

I didn’t purposely stop.  I didn’t even realize I stopped.  I just got going with life and completely forgot there was a plan.

It’s through this blog that I’ve fought the fizzle on many things.  And most of the time, I’ve won.  The blog has kept me focused, and fizzle is no match for focus.

But fizzle still scares me.

Last night, my 5th grader was supposed to draw a picture of the moon.  The kids had been playing baseball outside right up until supper time.  As soon as we were done eating, the kids headed straight back out there to continue the fun (now in the dark) and complete the school project.

It was only after they were outside, after Hubby and I had talked a while, and after I stood and began to leave the kitchen that I realized . . . “We didn’t clean the kitchen!”

And not forgetting to do it.  (Which leads back into the habit of NOT doing it.)

So, I said, “That’s an awesome picture of the moon, now let’s clean up the kitchen.”

I was mad because I never won against the fizzle, and all those defeats made me assume I couldn’t win.

But now I know it’s not about knocking the fizzle on its hiney, it’s about enduring through the fizzle.  Keeping on with the habit even when I feel my grip begin to slip.

Doing it when I remember instead giving up because I forgot.

I know from experience that eventually, we’ll grasp that this is how things run around here now, and a day (or week) of fizzle doesn’t mean we need to give up.

I’ll let you know how it goes.