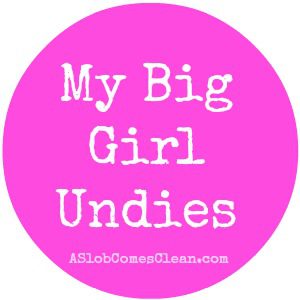 Y’know, from a fear of unwanted search traffic . . .

Anyway, I’ve been thinking a lot lately about an offhanded comment I heard on one of our new favorite TV shows.

I don’t generally take lifestyle advice from sitcoms, but this one really stuck with me.  Perhaps because it hit home.

We mostly love the new show Go On with Matthew Perry.  It’s full of quirky, kind-hearted characters with psychological issues.  Who could ask for more?

I won’t go into the whole episode with the cut-to-my-heart comment, but here’s the jist.  The girls were hoping to go shopping for fancy dresses with their group leader but the trip didn’t happen. In her disappointment, one neurotic character said to two other neurotic characters, “But I wore my good underwear today!”

The response from a neurotic-but-tell-it-like-it-is character? “You’re an adult.  You should only have good underwear.”

Was she talking to me?  (And if so, does that mean I’M the neurotic person who should be in a support group?)

I’m old enough to drive myself to the store and pick up a package of brand new undies whenever I need them.  And I may be frugal, but wearing undies with elastic strings that hang half-way down to my knees . . . isn’t frugal.  It’s cheap.

So, over the past few weeks these words of a fictional character have been running through my brain and I’ve trashed multiple pairs of imperfect undies.

Because I’m a grown up.

And I should probably act like one.  Even in the areas of life that no one (but Hubby) sees.