So yesterday I spilled my Slob Guts about my personal grief over not having been the perfect mother during my kids’ preschool years.

Today I’m going to share how Teamwork has been going so far this year. We’ve been at it for one week.

(Technically, we’re two weeks into the year, but did anyone actually begin working on New Year’s Resolutions before starting back to school?) 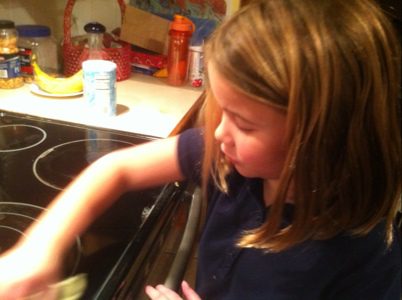 The Sunday night before school started, we had a Family Meeting (which was really just a purposeful talk during supper). Hubby and I began by reminding the kids how we’ve benefited as a family from my blog over the past year-or-so. We were able to take vacations with BOTH sides of our extended family. We went to Medieval Times, had fantastic seats at a Rangers game, and we all LOVE our new fancy fridge.

(It really wasn’t difficult to remind them, as they are already my biggest fans. Though I do sometimes worry who they’ve told about my blog . . . )

Then I shared with them my vision for 2013. We’d talked about all of it before, but now we were discussing a plan. They were excited.

I reminded them how much time I already spend working on my blog. I asked them to imagine how much more time I’ll need to work if I add these new projects.

And I told them that I needed their help.

We talked about how thankful we are that I’m able to make a little money from something that allows me to still be able to take them to the pool every single day of the summer. We discussed how great it is that I get to pick them up from school every day.

They’re old enough to see that not everyone gets to do this.

Then I told them what I needed from them. I didn’t create a chart or system. I just said, “We’re going to making cleaning up the kitchen part of dinner time. Every night.”

After supper, my 11yo claimed the sink and filled the dishwasher. My 6yo gathered scraps for the dog and cleared the table while my 9yo wiped down the counters and the table.

And I realized that even though I hadn’t succeeded at making this an everyday part of their lives, I had taught them how to do these things.

In fits and spurts. On focused (though not necessarily consistent) summer days.

And as they worked on their jobs, I was able to sweep and straighten and do some of the things that get pushed to the side when I’m overwhelmed with just the basics.

It was such a relief to know I wasn’t starting from nothing. Such a reassurance to know that even a randomly taught lesson has lasting impact.

Throughout the week, it got easier. My ever-observant 9yo said, “It’s getting easier to clean up the kitchen since we’re doing it every day” and “We’ve had plenty of clean glasses this week!”

When there were more hands than jobs, I had my 6yo gather the recycling or my 9yo pick up the living room.

And as we worked, we sang. At the top of our lungs. And we were together.

Do you have something you’re focusing on in 2013?  How is it going so far?