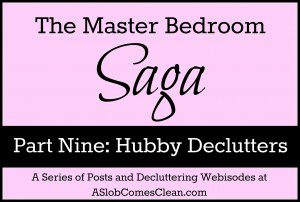 This is part nine of what seems to be an endless saga.

In this part, I’m sharing Hubby’s role in this process.  I’m often asked how to motivate a husband to declutter.  While I can’t let myself worry about that too much, I have seen my own husband become more and more willing to declutter over the past three years.

This one insanely-focused master bedroom project helped me identify what seems to work best with him.

Hubby and I had more of “the talk” on our drive tonight.  The difference in our master bedroom is so significant and so appealing to us (who’ve basically lived in a storage unit for a very long time), that we’re very motivated to do the Decluttering Thing right.

Hubbies (not just mine) sometimes need to be warned.  Gently and gradually warned.  The most successful decluttering happens when the declutterer feels in on it.

The gradual sparsifying of this room has helped motivate him.

I explained, as gently and clearly as possible, how my goal is to not see how much we can fit back into the space, but to create the room we really want.  It’s a concept to grasp.  As a woman who has taken three years to be ready to tackle something like this, I am trying to be understanding that it might be harder for the (unbelievably good-natured) man who’s along for my ride.

To make him feel better, I let him know that I had designated the now-empty storage crate-that’s-really-a-table as his.  It was all his to store whatever he wanted to keep.

On Labor Day,  Hubby did a great job purging his stuff.  He was ready, after our multiple conversations about how nice the master bedroom felt being empty.  But it was still hard.

And I think in these situations he might be a teeny bit scared of me.

So I tried my best to be supportive.  I reminded him that I had designated the storage table in our room for him to store whatever he wanted.  There was also an empty under-the-bed storage container for him to use. 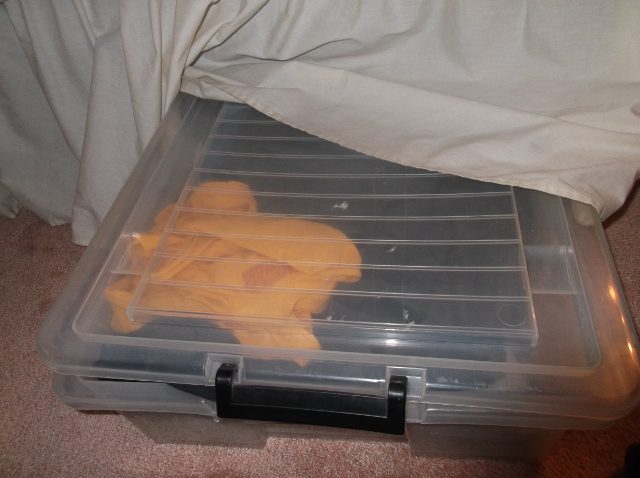 No judgement from me on what he was keeping.

I knew that those two storage containers already had designated space in the room, so whatever he wanted to put in them was fine with me.

I even gave up my magazine basket.  (The one I completely emptied when I realized I hadn’t looked at a single one of the  magazines that I stuffed in there a year before.) 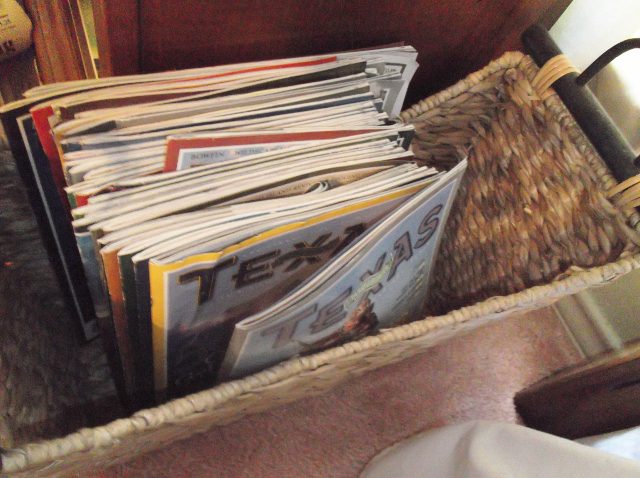 He was feeling blue about what to do with his favorite magazines.  So I gave it to him and casually said maybe he could keep as many as would fit in there.  The ones he kept didn’t even fill it up.  Maybe next year when we do another purge he’ll decide whether he really needs them.

So what did I learn about motivating him to declutter?  Well, it’s pretty much the same thing I’ve been learning for the past three years.  I need to declutter first.  When he sees the difference decluttering makes, and when he sees that the stuff left is his, it’s much easier for him to see the purpose in decluttering his stuff.  Make sense?

I also think it’s very important to not simply urge him to declutter, but to give him solutions.  Knowing that he had two good-sized storage spots made him more willing to tackle the daunting task.

Have you read the other posts in the Master Bedroom Saga?  We’re getting close to the end.  I promise!

Be sure to catch up on parts one, two, three, four, five, six, and seven  and eight if you haven’t read/watched them yet!

Oh.  And I did shoot an interview with him about this, but it’s going to have to wait.  I just don’t have the time to edit it!