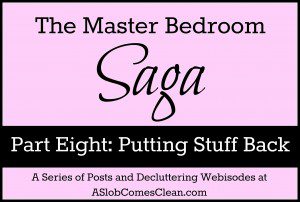 I did the whole Master Bedroom Saga over the course of two weeks.

Two exhausting weeks when I was able to devote a ton of attention to this project because school had just started but life hadn’t.  Meaning, I didn’t have commitments yet.  And I had a deadline.

The weekend that fell in the middle of this project was Labor Day.  We did family stuff for part of it, so basically there were three days between the time when I finished removing everything from the bedroom and the time when I had to stop pretending I was done.

I enjoyed the “I’m done!” delusion because Hubby and I really liked the bareness of the room.  After years of suffocating (without even realizing we were) because of the huge amount of stuff, we enjoyed the peacefulness of . . . nothing.

We weren’t bothered by the empty built-in bookshelf or the bare mantel on the fireplace.

But on Monday (Labor Day), reality slapped me back into consciousness when I realized that I now had less than a week before people would be entering my home and . . . quite possibly . . . using my bathroom.  And my guest bathroom is in the gameroom where I had put all the stuff.

So I had to begin the daunting/paralyzing/overwhelming task of putting stuff back.

I started with the easy stuff.

Because that’s the only thing I know to do.

Looking at the mass of stuff in the gameroom, my gut reaction was to throw it all away.  Knowing that wasn’t possible/practical made me feel defeated.

One small item? I can do that.

So I started pulling out the most obvious thing that I couldn’t possibly throw away.

Obviously, those needed to go somewhere.  At first I thought I would create a picture wall, fully aware that that is what old ladies tend to have in their bedrooms.

I was ready to be an old lady.

But when I went into the room, I decided to fill my fireplace mantel with the framed pictures. 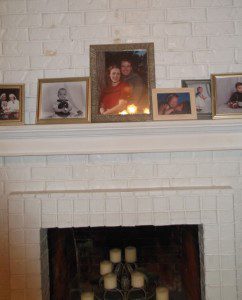 And then I started filling the now-empty bookshelf. 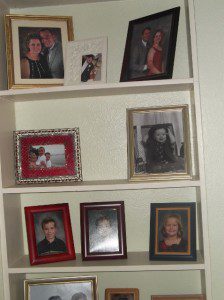 And I liked it.

I’d love to have better-coordinated frames someday, but for now I’m just happy that treasured things have a home.  A real home.

But speaking of embracing my Old Lady Self, I had to make a hard decision.  Among my framed pictures I came across a collage of crazy pictures from my college days.  I love those people and treasure those memories.

But they didn’t make the cut.  I’m a grown-up in a grown-up house, and my kids and family get the treasured spots.  College memories?  They go in a photo album for reminiscing every once in a while.

After that, I started finding stacks of CDs that were probably created from ones that were randomly strewn around the room before the excavation began.  That was easy.  They went into the newly rearranged CD cabinet.

In the second week of the saga, I rarely had more than an hour at a time to work.  Which was likely a blessing.  Deadlines and time limits can be very helpful when decluttering, as they often force me to pitch something because I simply don’t have time for the agony.

Have you seen the rest of the master bedroom saga?  Be sure to catch up on parts one, two, three, four, five, six, and seven if you haven’t read/watched them yet!

If you’re reading via email, you can click the title of the post in your email to get to the blog where you can see the webisode!

I recently asked on Facebook what cleaning items people would want to receive as a gift.  After maid service, the Roomba (robotic vacuum cleaner thingy) was at the top of the list!     I’m sorry.  This offer has now expired.  The same model was on Amazon for $337

when I checked. You can sign up for Groupon here and then click on “goods” at the top.

Yes, those ARE my referral/affiliate links!