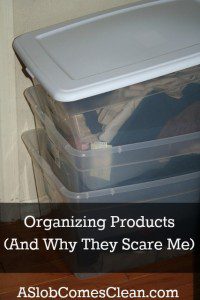 I have a phobia of organizing products.

It was a late-onset phobia that developed in my mid-thirties.  Right around the same time that my delusions that I would become organized once I became a true grown-up started to reveal themselves as . . . delusions.

Y’know.  Since I was in my mid-thirties and could no longer deny that I was a grown up.

I had purchased (and been gifted by my well-meaning mother) many an organizing product.  Mostly . . . storage tubs.

Storage tubs that I over-filled with random stuff to be dealt with later.

Storage tubs that over-filled my closets and bedroom and garage with . . . random stuff to be dealt with later.

Random stuff that I never dealt with later.

Soooo.  As I’ve worked to declutter and develop decluttering methods that make a real impact on our home (instead of just enabling my love of procrastination), I’ve focused on dealing with each individual item instead of packing it away for future frustration.

That has worked exceedingly well for me.

But . . . I found that even when I actually needed a storage bin, I was still rather phobic.  (Which doesn’t make sense, but if I call it a phobia it doesn’t have to make sense, right?)

When I worked on the Master Bedroom Saga decluttering project, I got to the point where I knew that I needed a new organizing solution for storing out-of-season clothes. 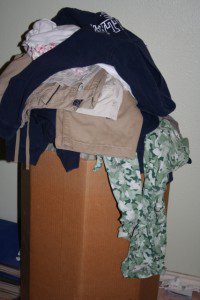 Instead of calling it a “new” solution, perhaps I should just call it a solution.

Because what I had been doing hadn’t been working.

It was a nice thought to hide extra clothes inside a table-that’s-not-really-a-table, but they were only hidden until a frantic search for something-or-other left the table’s secret life exposed.  And as someone who tends to leave off the last step of any given task . . . the mess that resulted usually stuck around for a while.

I’ve blogged about this frustrating should-work-but-doesn’t storage solution before, so if you’re one of the people who suggested I give up on it . . . go ahead and tell me you told me so.

With much fear inside my Slob Heart, I shelled out the money for some tubs.  Clear tubs

For my three kids.

I put each child’s off-season clothing into his/her own tub and then (eventually) put his/her tub in his/her closet.  In his/her room.

And that’s one less constant source of disaster in my room.

We’ll see how it works in their rooms.  If there’s one thing I’ve learned over the three years of my deslobification process, it’s that even though not all organizing solutions are going to work, it’s still okay to give them a shot.  I can always try a new way later.

But even if this solution doesn’t work perfectly in their rooms, it’s a sure-thing that it will improve mine.

Disclaimer #1: I put (eventually) in the paragraph above where I said I put the tubs in the kids’ closets.  At the point when I typed that, those tubs were still sitting just outside my laundry room where they’d been hidden during the two home group meetings we’d had since I filled them. But now, they really are in the closets.  Because I just put them there.  Blogging motivates doing.  It’s my plan and it’s working.

Disclaimer #2: While I do acknowledge that you-were-right-and-I-was-wrong on the whole “Why do you still have clothes stored inside that table-that’s-not-really-a-table?” argument, I’m not ready to acquiesce to those who question the need to store off-season clothing at all.  In fact, while I love having you here as readers . . . I do question your need for your own deslobification process. If one year’s worth of clothing truly doesn’t over-fill a closet and you have the presence of mind to be fully aware of what your children are wearing at any given moment . . . I admire your Not-a-Slob Brain.  I’d love to be at that point.  But I’m not.

?  It’s my affiliate link and I get a teeny percentage of anything that you purchase on Amazon after you get there by clicking that link.