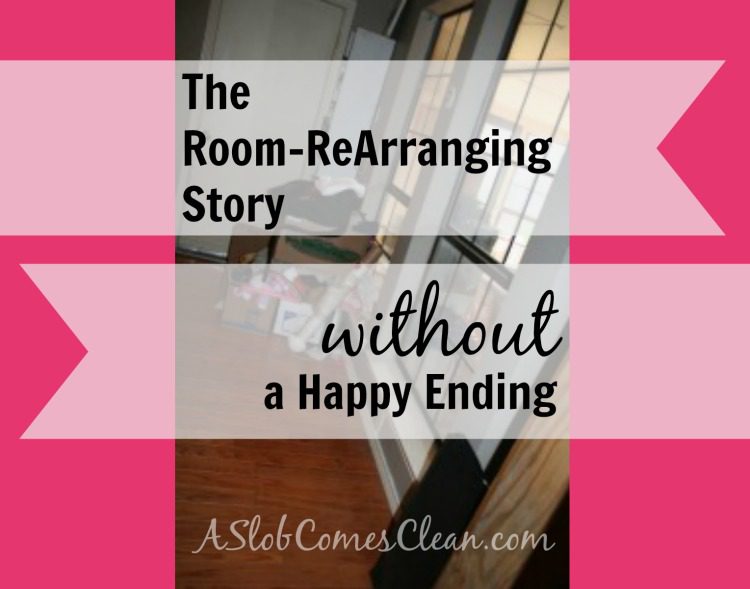 Last week, I shared my plan for our office/gameroom/guest room.

I LOVED the comments on that post.  They really helped me think through what I wanted to do with that room.

The main thing I got from your comments?  Embrace one purpose for the room.

Decide on a purpose and go with that one purpose.  Yes, it’s a guest room, but only on rare occasions.  For those occasions, it can be turned into a guest room.

Thinking that way helped me realize that it isn’t really an office anymore either.  I now have a laptop and do most of my writing in the living room.  The computer in there is generally for the kids now.

A computer for the kids would be something you would find in a gameroom.

And if I go with that one theme, the bar makes so much more sense!

I thought about this all week.  At some point in the week, it hit me that the dresser should be our new TV stand, the current table/TV stand our new computer desk, and the desk should be the thing that goes to the curb.

The desk isn’t special.  I bought it at a garage sale for about twenty dollars.  It sounds cool to have all that shelf space going up the wall, but really . . . it just becomes a clutter catcher.  A LARGE and un-hide-able clutter catcher.

So . . . I had big visions of spending a little time today moving some furniture pieces around the room.  I saw a webisode in my head that ended with a satisfied “See how much of a difference just re-arranging furniture can make?”

Well, I moved the furniture. 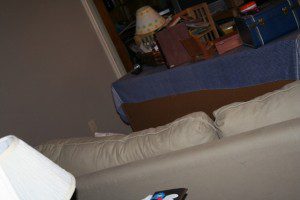 I took this picture at the point when my pulse started racing and the anxiety over the it-gets-worse-before-it-gets-better mess I’d created began affecting my vision.

With each piece I moved, I uncovered random items that had fallen (or been stuffed) behind it.

I turned on my Slob Vision and decided that I wasn’t going to get sidetracked.  I was just going to move the furniture.  Randomly stuffed items would simply be re-randomly re-stuffed.  (There goes my chance at winning Orgjunkie’s 29 Day Challenge!)

I simply didn’t have time to do an entire room overhaul today.

I moved the couch where the dresser had been.  I’ve never studied feng shui but I’ve heard enough to know that you’re not supposed to block doorways.

Which is also common sense.

Soooo, I “floated” the couch.  I’ve also heard this is good decorating practice.  You’re not supposed to think that all furniture has to be pushed up against a wall.

Except now, my (overly full at the moment) Donate Spot isn’t hidden at all.  Not that it was hidden before, but I could pretend it was. 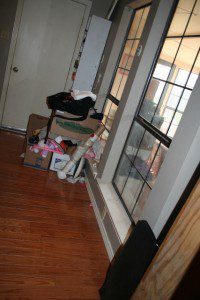 And the room looks smaller. And if I’m in a hurry to get to that potty . . . I might just break a leg when I forget that there’s now a COUCH in the way of getting to the half-bath back there. 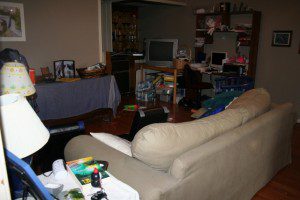 I’m guessing that getting rid of the desk and abundance of now-much-harder-to-ignore clutter will help.

I still think that some version of this arrangement will be how we need to go, and since I don’t have the time to re-re-arrange it today, I guess I’ll have to let it sink in and hope that some masterful solution comes to me in my sleep.