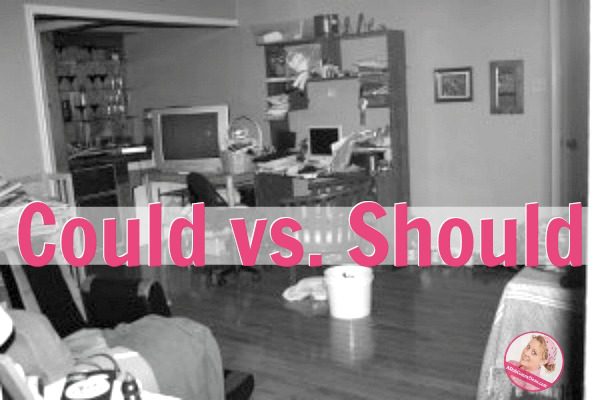 Org Junkie is having a February Organizing Challenge.

I’d rather use the time I would spend planning a strategy . . . to just get something done.  100% less chance of failure that way.

“I’m gonnas” have rarely worked for me. 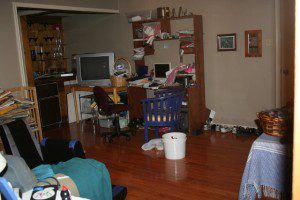 I think it needs a plan.  Thankfully, it’s been functional for more than two years now.

Functional is a big deal for this room.

It’s larger than some people’s living rooms, but was officially an “ebay” room for more than three years.

Functional is a good place to be since it means I can send guests to a half-bath in the back corner of the room.  Most people didn’t even know that bathroom existed when the room was packed to the ceiling in . . . stuff.

So, while a busy February looms before me, and the thought of COMMITTING to a big organizing project freaks me out more than a little bit, I’m going to go ahead and make a plan for this room.  It needs one, and if that’s all I get done, at least that’s something.

Get over the coulds, and stick to the shoulds.

I have a deep-seeded (and likely hereditary) tendency to gain joy from coulds.  As I’ve gone through this deslobification process, I’ve tried to stop taking pride in getting the MOST possible things into a room. 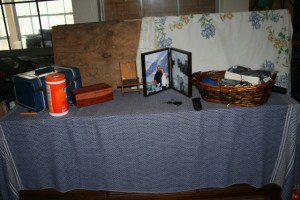 It’s full of drawers.  Drawers that can store stuff. And really, not everyone would think to put it in a room like this.  Y’know, a room that doesn’t actually NEED a dresser.

I used to be proud of that out-of-the-box thinking.

But after trying to keep my house out of Disaster Status and re-decluttering this blankety-blank dresser sixty-ba-jillion times . . . I’m not feelin’ so proud anymore. 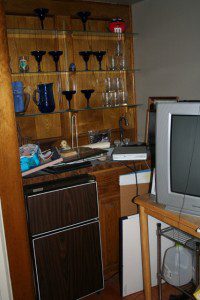 No.  We don’t use it.  And no, I’m not doing a major construction project this month to get rid of it.  But, I’ve realized that this room will never look right if I don’t embrace it.  Meaning, stop pretending that since I don’t see it . . . others don’t see it. The counters are stacked with non-bar/non-anything stuff.  It does have cabinets, which in an ideal world would provide some storage.  But I haven’t been able to get into those cabinets in years because they are blocked from being opened by the TV.

I don’t even remember what I stored in them.

Basically, it comes down to this:

I’m thankful that this room has been walk-thru-a-ble for more than two years now.  For me, that’s big.  But . . . it’s time for me to get over my coulds.

Just because a piece of furniture could fit in this room doesn’t mean it should.

Just because there’s a blank space of wall that could accomodate one more piece of furniture . . . doesn’t mean I should put one there.

Get rid of the dresser.

Move the couch to where the dresser is.

Move the TV to where the bookshelf is now.

Move the bookshelf to where the couch is now.

Make this room easier to use and maintain.

So there’s my plan.  The thought/dream of getting it done in February seems pretty far-fetched, but at least I have a plan.

P.S.  Do you think it should be “deep-seeded” or “deep-seated”?  I honestly don’t know as it’s one of those say-it-but-don’t-write-it things.  I chose “deep-seeded” because I imagine this living organism down inside of me that causes me to fill all available spaces with stuff.  Like a seed so deep down that it takes LOTS of effort and digging to get to it and remove it completely.