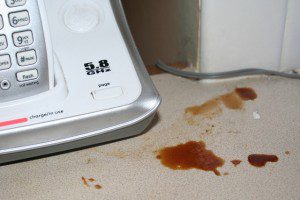 Sometimes (okay, lots of times), I get a little over-dramatic when I find a mess somewhere that is extra sticky or extra embarrassing.

But I’m not taking this mess personally.

A little over a week ago, I was unplugging my phone so I could take it to church to use as a prop for a scene.

Anyway, as I grabbed the phone . . . I saw that under it was something icky and sticky and brown.

Now, I’m not claiming that your phone has something icky and sticky and brown and unidentifiable under it right now.  But I am claiming that this could happen to anyone.

Yes.  I was a little embarrassed to have to wipe the underside of the phone in front of people after I got to the rehearsal, but just normal person embarrassed.

If I had known that there was icky stuff splattered across the entire counter and had left it for days/weeks/months on end . . . that would be something that could only happen to a slob. I know, because things like that have happened to me in the past.

But a totally hidden mess?  That could happen to anyone.

It’s nice to be an anyone.

Oh, and just so you know . . . it was almost impossible to wipe up, so I tried the same “trick” I use with dried-up pancake batter.  It not only worked, it actually disintegrated the icky, sticky, brown, unidentifiable stuff!  Wonder what it was . . . .