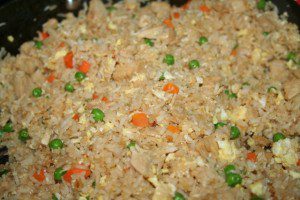 At the end of a busy day, I was desperately trying to get supper together.

Tuesday afternoons are always crazy as one child gets dropped off at 4:30, another gets picked up across town at 5:00, and the first gets picked up (back across town again) at 5:30.  Hubby usually tries to help, but his eyes were dilated today from an eye appointment.

I ran by the house between the 5 and 5:30 pickups and threw some frozen chicken breasts into some water and set it to boil (I didn’t have any pre-cooked in the freezer).  Thankfully, I had remembered to put out the frozen, cooked rice out to start thawing earlier in the afternoon.

When I got home at 5:45, I started throwing together Chicken Fried Rice. I banged the partially thawed rice on the cabinet and MOST of it broke apart nicely to go into the skillet.

There was just one last chunk.  One chunk that needed to go into the microwave.

But at that moment, the frozen peas and carrots were thawing in there. And with the extra-large crockpot full of beans taking up counter space, and the boiling chicken taking up stove space, and the never-put-away-from-making-lunches-this-morning bread and peanut butter taking up even more space, I had nowhere to put the rice.

At least nowhere on the counter.

Ten minutes later, after I had already called the family to dinner . . . I realized that there should be more rice in the skillet.  I looked and looked and finally decided that it must be my imagination.  The large chunk of frozen rice that I vaguely remembered did not exist.

I had looked everywhere.

And then I grabbed the plates for my daughter to put on the table. 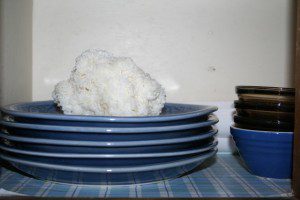 I guess it’s a good thing we didn’t use paper plates tonight. 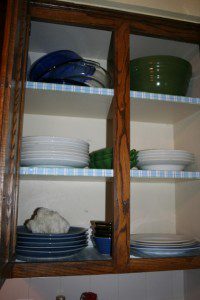