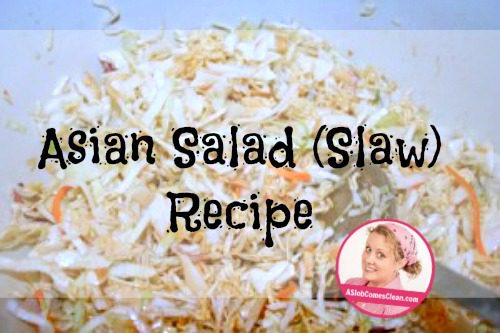 I’ve posted this recipe before.  But it was an afterthought within a menu plan.
This recipe deserves to be the star of its own post.
If you’re a regular reader, you know that I lived in Thailand.  Which is in Asia.  I don’t know that I ate much salad there.  I think the idea is that the flavors are Asian, not that it’s an authentically Asian dish.
I did have steamed iceberg lettuce in Hong Kong once . . .
Anyway, I made this last week during our post-Disney-trip-veggie-craving-time.  It’s a perfect salad to eat as a meal because it is very filling, and a little heartier than normal because it is made with cabbage.  Sometimes we add diced, cooked chicken to make the meal seem more official. 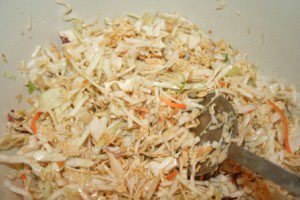 Ingredients:
2 (3 ounce) packages ramen noodles, uncooked, crushed (15 cents each)
2 oz slivered almonds (This amount costs 88 cents at Walmart, and I find them in the baking aisle.)
2 teaspoons sesame seeds
1 lb. bag of pre-packaged cole-slaw cabbage ($1.50 – buy the one without the dressing, as you won’t need it)
1/4 cup vegetable oil
3 tbsp. distilled white vinegar
3 tbsp. white sugar
3 tablespoons soy sauce
Make the dressing first, as it needs time to cool.  It can be made ahead.  (Not that I ever remember to make it ahead, but it can be.) 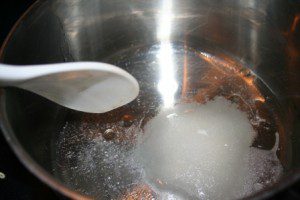 In a small saucepan, bring oil, vinegar, and sugar to a boil for 1 minute while stirring. Just a warning, this will clear your sinuses big time. Breathing in the vinegar fumes can be quite a shock to your nostrils.  And be careful with the boiling oil.
After it cools some, add soy sauce. It’s best to chill the dressing.
One of the best parts of this salad is the crunch, which makes the next part the most important! 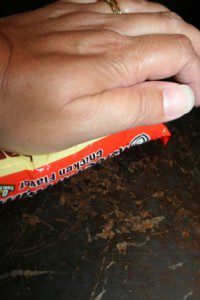 To avoid a mess, crush your ramen noodles while they’re still in the bag.  Put on a cookie sheet with the almond slivers and sesame seeds and toast in the oven at 300 for about 10 minutes. 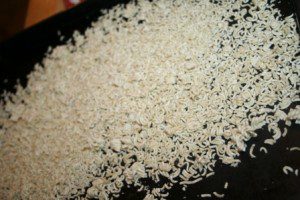 I generally set the timer for 5 minutes at a time, and when I start to see the noodles browning, I take it out.
If it starts to smell like popcorn . . . it’s too late.  Trust me.
Toss everything together, and you have a wonderful, filling and crunchy salad.  And just so you know, in case you think you don’t like coleslaw or cabbage, my mother was shocked when I made this.  Because I think I don’t like coleslaw or cabbage.  But I looove this salad!
Honestly, we don’t make our kids eat this.  I generally have a love-it-or-leave-it dinnertime policy, but I make an exception.  Consequently, hubby and I only eat about half of this recipe for a meal.  Last week, I finally thought ahead enough to only toss together half of it for our initial meal, and kept the rest of the ingredients separate.   When they’re already mixed together, the crunchy stuff is soggy and gross on the second day.  By keeping the ingredients separate, I was able to have this for lunch for two days last week!
And our Menu Plan this week?
We have VBS, so I’m keeping things super-simple.
Monday – Spaghetti (My 9 year old is learning to make this meal by himself this summer!)
Tuesday – Jambalaya (My 5 year old assumes she is going to get to cook, so I chose this crazy-simple meal for her.)
Wednesday – Chicken Stir Fry
Thursday – Homemade pizzas
Check out more Menu Plans over at Menu Plan Monday at Orgjunkie.com.
I originally found the basis for this recipe at Allrecipes.com, but modified it to our tastes.