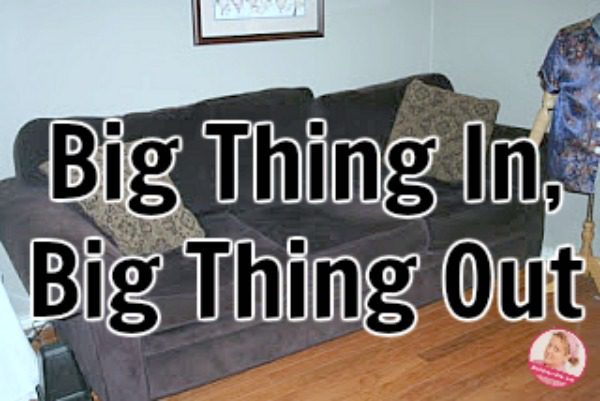 Waaaaay back, like six months ago, when my Sister in Law put her house on the market, I started dreaming about her couch.

It would look fantastic in MY living room, and then I could move our current couch into the office/gameroom and the daybed from there into my daughter’s room . . . . and so on and so forth.

She has now moved, and is keeping her red couch. 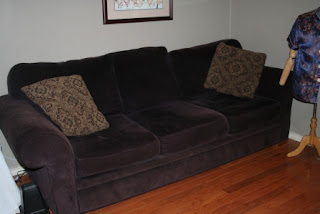 But she did decide to get rid of her eggplant couch.  Which I had no problem falling head-over-heels in love with.

I’m ok with being couch-fickle.

Once their impending move became reality, I batted my eyes at hubby and said plainly, “I want that purple couch.”

Then, last week, as I knew that the time was approaching when I would get to bring it to its new couch-loving home, I had to figure out the logistics.

I decided to put it in our office/gameroom.  It could go in the living room, but that would mean changing my red accents.

We’ve had a daybed in the gameroom since we moved in, because it’s also our guest room.  The only problem is that it’s a guest room for around 5 days a year.  And for the other 360, it’s not.  And now that it’s functional (as opposed to being an ebay storage room like it was pre-blog), I can send guests to the half-bath  in there (instead of the never-know-when-it’s-going-to-smell-like-pee boys’ bathroom).  I love this room, but lately I’ve been irritated that new guests seem to hesitate, thinking it’s a bedroom because . . . you know . . . there’s a bed in it.

So last Monday, I was happily thinking about how my daughter would have so much more space when we put the trundle bed from the office in her room.  And then it hit me.

I should get rid of her full-size bed.

A bed that we bought NEW.  (As opposed to the many many other pieces of hand-me-down furniture we have.)

I knew in my brain that this all made sense, but every slob-cell in my body resisted.

I called my mom.  I needed to talk it through with someone.  Someone who knows all about my “issues” and also has full knowledge of our space and our needs.

She was so understanding of my inner conflict, but she confirmed that there was no reason to keep it.  No reason as long as I wasn’t keeping something from her . . .

(She had just dreamed a few nights before that I told her we were having twins, maybe triplets.)

There was no reason at all to keep it.  Other than the usual what-ifs.  Sure, this blog could take off and I could publish a best-seller and we could buy that big dreamhouse with a pool (for me) and a pond (for hubby).  But in the meantime (the very long and likely indefinite meantime) I’d be stuck with a big ol’ mattress and boxsprings with no real place to put it. 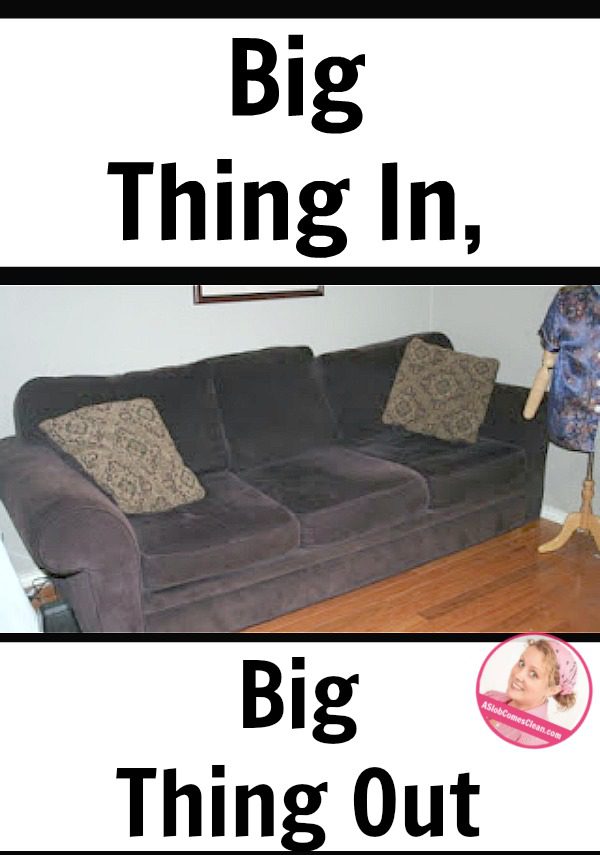 Read Newer Post Motivated by Falling Objects
Read Older Post Letting People into Our Lives, Not Just Into Our Home