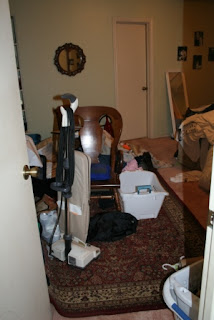 Really, all of the clues so far have been pretty in-my-face.  No sleuthing required.

But how our master bedroom repeatedly falls into chaos . . . still feels like a mystery to me.

Anyway, today was a free day because my newly five-year-old is sick.  ON her birthday.  Yes, please feel sorry for her.

The twang of guilt that I felt while hubby tripped three times as he tried to quietly head to the bathroom at 5:30 this morning . . . might have something to do with why I chose this spot.

I had been doing better.  The master bedroom hadn’t been as bad. It also hadn’t been good.

Then, the princess party happened.  And the seasonal-clothing-changeover happened.  Suddenly it looked like that picture up there.

I answered the in-my-head-whiny-voice’s typical “WHERE do I start?” with what has become my mantra of late:  Do the easy stuff first.

The rocking chair that has a definite place in the living room but had to be moved for the party?  Easy.

The vacuum cleaner that has its very own closet?  Easy. 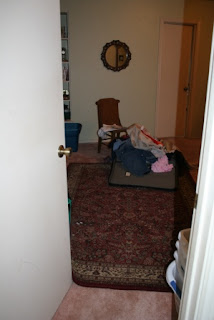 That’s the mid-math of the seasonal clothing changeover.  (Mid-math as opposed to aftermath, which is what it would be if I were actually done with the project.)  I finished going through the clothes.  Which also meant bringing back the dish-barrel-that-doubles-as-a-table where I store the other out-of-season clothes.

Once I was done, I had to decide whether to put the lid/table-top back on in its still-cluttered-state. (Yes, I had skillfully removed the tabletop with clutter intact.) 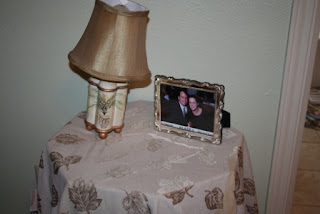 I got a little crazy and cleaned it off.  Here’s the thing.  Hubby empties his pockets on that table.  Sorting through the contents of someone else’s emptied pockets can be a tedious job.  Pre-blog, I would have let my frustration over that sorting-job put me over the edge, and it’s more-than-possible that I would have somehow blamed him and his pocket-emptying for the chaotic state of the master bedroom.

Which would have been totally untrue.

I take responsibility for the state of the master bedroom.  I’m the mindless-clothes-dropper.  I’m the last-minute-shover.  I’m not saying he doesn’t have any part in it, but how in the world can I expect him to be perfect in every thing he does when it’s me who lets it get to this overall state?

Anyway, I did the tedious sorting job, and decided to try something.  I like the look of the table completely cleared: 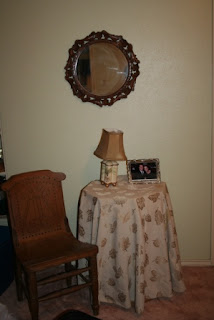 But that is unrealistic.  He needs a place to empty out his pockets.  So I grabbed an unused container that happened to match, and a trash can, and I set up a pocket-emptying-station for him, right where he does it anyway. 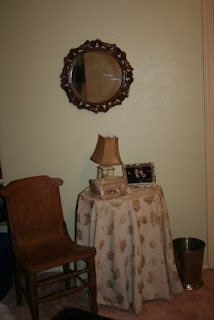 Maybe I’ll remember to tell him.  Or maybe he’ll read this post and know that he is free to dump the trash in the trashcan and the important stuff in the little basket.  It may not be a perfect plan, but it’s better than no plan at all.

Then, I moved the suitcase back to my closet and took the after picture: 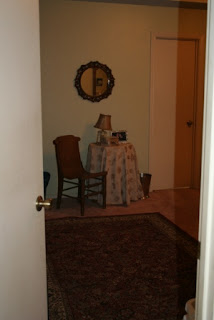 And felt guilty for purposely cutting this out of the picture: 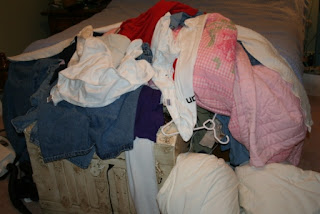 Proof that finding a clue doesn’t necessarily stop the problem. 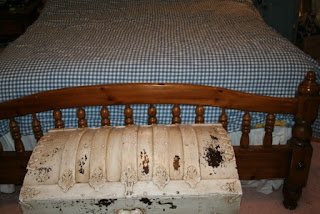 This “last minute shoving” clue isn’t just a master-bedroom problem.  It’s a whole-house problem.  When things don’t have a home, or aren’t in their home, the master bedroom becomes the last minute dumping ground.  When that happens, the motivation to attend to details like proper-pocket-sorting-techniques or still-clean-clothing-hanging . . .  evaporates.

While I know from way-too-much experience that the work I did today on the master bedroom won’t magically keep it clean forever, I can say that each time I have worked in the master bedroom since beginning my deslobification process has been a little easier than the time before.  And the results have lasted a little longer.

On Friday, I’ll be linking this up to Orgjunkie.com‘s 52 Weeks of Organizing.