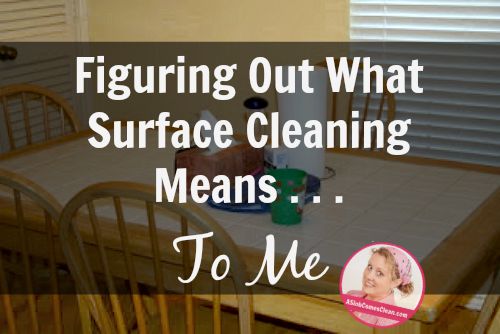 LOVE all the discussion about surface cleaning in the comments on yesterday’s post.

I’m sure there’s a definition out there somewhere and an expert who could tell us exactly what surface cleaning is supposed to be.

But I don’t care.  I need to figure out what it means for me, and how it can help me in this deslobification process.

One of the things brought out in the comments was the “place for everything” concept.  I think this is so true.

But soooooo difficult.  Even as I get rid of my too-much-stuff-to-fit-in-my-house, I still find that I struggle.  And someone else pointed out the very real slob-struggle to actually put things away once they do have a “place.”  Mmmm-hmmm.  So true . . . too.

After pondering this concept all day, it made me laugh that we watched the episode of I Love Lucy last night where she and Ricky were bickering about his slobbish tendencies.

I know it was a TV show.  I know it was back in the 50s.  I know that comic effect was the goal of everything in it.  But I’m a huge Lucy fan and so I’m going to draw some wisdom from her.  (A friend recently made my YEAR when she said my profile pic reminds her of Lucy!)

Anyway, as the show opens, she is talking to Ethel on the phone about how she loves an orderly home, and as she talks she straightens an already perfect desk and pushes in a barely-not-pushed-in chair, etc.

I started thinking about the “straightening” I’d given myself permission to do that day.

Here’s the thing.  To me, as a slob, straightening seems pointless.

I’ve always been in awe of homes with tons of stuff, maybe even as much stuff as I have/had, which don’t seem like a tornado just blew through.  Some people can handle it.  Their huge amounts of random items are lined up neatly, while mine are in piles.

I think . . . maybe . . . it’s because they straighten. Not just at the point when things are chaotic, but when things still look pretty good.

Now, I’m in no way saying that straightening is the answer to all of my slob-problems.  I have too much stuff, and I don’t have the personality or brain-type to be able to handle it.

BUT, accepting that I’m different doesn’t mean that I shouldn’t bother straightening the stuff I do have.

Here are a few more examples of how straightening makes a difference:

This first picture is of our breakfast table, in a condition which I generally consider fine.  This is what it looks like after I have cleaned it off.  There are no dirty dishes on it (the cup is my daughter’s drink, still to be finished), and the table has been wiped off.  I’m good with it.

The blendy pen and two potholders?  Totally invisible to me. 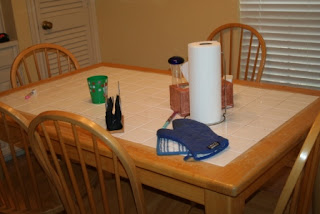 Then I straightened it.  Pulled everything into the center to make it look a little neater and more purposeful.  At this point, I see the blendy-pen and the potholders, and I also notice the teeth-brushing-timer that my daughter got at the dentist. 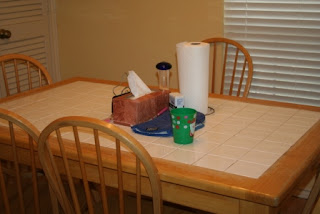 So once there is a little order, just a little . . . the which-of-these-things-doesn’t-belong game is easier to play, and I see the potholders, the teeth-brushing-timer and the blendy-pens.

And the paper towel holder which is supposed to go on the counter. 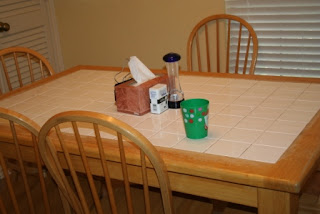 I still don’t love having the Kleenex on the table, or that I have no idea where my pepper shaker went, but I’m OK.

And then there’s my bathroom counter.  The place where I know things have been spreading-and-multiplying, but which overwhelms me. 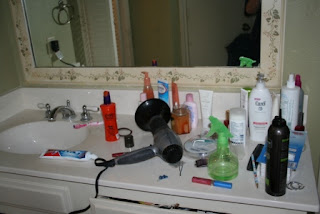 I cheated a little on this one and immediately stuck things into the drawer and put the hairdryer under the counter where it goes.  In seconds (literally) it looked like this: 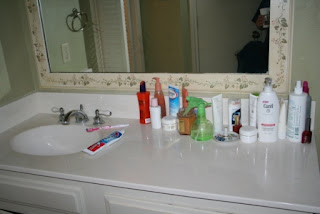 No decluttering or organizing . . . just straightening.  And personally, I think the difference is fairly impressive.

Here’s the thing.  This surface-cleaning-concept has to mean different things to different people.

You know, because we’re all different.

But for me, if I can use the concept to give me the freedom to “just surface clean” when I don’t have the time or energy or desire to “really clean” maybe I’ll have found one more piece of the puzzle, maybe I’ll be one step closer . . . to having that orderly home I crave.