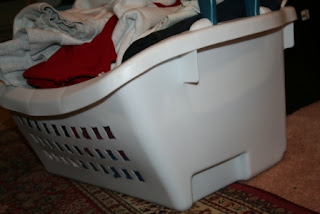 We/I have too many clothes.

I’ve known this, and the first clue in the Messy Master Bedroom Mystery was related to this concept as well.

But I had a slap-in-the-face moment this morning when I went looking for baskets.

See, I’m trying a new method.  Not new as in earth-shattering-no-one-has-ever-thought-of-it-before, but new as in now-that-I-actually-have-empty-laundry-baskets-why-not-try-what-so-many-normal-people-do.

Since I (sometimes theoretically, but mostly in reality) do my laundry all in one day, I’ve recently decided to sort laundry into baskets for family members as I fold it.  Several readers have suggested this method, and my own mother did it this way. It works much better than my previous fold-it-and-stack-it-in-various-piles-until-said-piles-tumble-over method.  At least the initial folding part does.

The putting away part needs some tweaking.

The boys did better at putting away their clothes when I would hand them small stacks.  Taking two entire baskets into their room at one time . . .  resulted in them accidentally switching baskets, each son putting his brother’s clothes into his own drawers, and then repeatedly donning too long or too short pants . . . each and every day . . . . for the next week.

But I really can’t say much about their lack of putting-away-skills, since my own are rather lacking.

I’m guessing that it was last Friday when I experienced the how-in-the-world-am-I-completely-out-of-undies panic.

My mind was boggled, until I glanced down and saw . . . . my basket.  My basket that had been moved into the master bedroom several days before, but was still full of folded clothes.

So, I did what one would expect . . . I dug out a pair and left the basket full.  On the following days, I dug out more pairs, one at a time.  Only today, when I needed the basket, did I actually spend the two-minutes-or-less that was necessary to empty it.

There are two parts to this Clue:

First, even though I knew I had too many clothes, it’s still an eye-opener to see that I could go an entire week without touching the items that I washed from the week before.

Second, I need to work on this new everything-folded-goes-into-a-basket system.  Moving an entire basket of clothes from one spot to another is much easier, but not quite so effective, as moving small stacks, one at a time, that might as well go straight into the proper drawers.

Solutions that allow me to postpone the inevitable aren’t really solutions for me.

Because I love to postpone the inevitable.