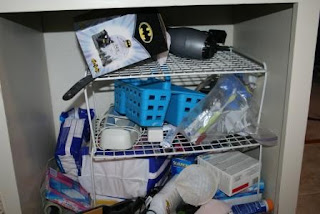 This spot has been bugging me, big time, for several months.  Looking at the picture, I’m sure you have no idea why.

But even though it irritated me, I didn’t do anything about it . . . other than to tell myself how I really needed to do something about it.

So, when I checked A Bowl Full of Lemons’ organizing challenge for the day, EVEN THOUGH it’s technically a holiday and holidays are one of my very best excuses to avoid cleaning . . . I knew that I should do it.  (It’s so irritating when you’ve been waiting for a reason . . . and then the reason actually shows up.)

Her challenge today is to organize under the bathroom sink.  This is technically not directly under the sink.  It’s the area where, if I lived in a fairy tale, I would have a chair and sit down to do my make-up every morning.

I don’t live in a fairy tale, and face-painting is not a leisurely task around here.

So, in an effort to find more storage in my bathroom, I put in these handy-dandy shelves and started shoving things down there.

And boy, when it comes to shoving stuff in a designated area, I’m good.

There were several reminders of my grab-anything-I-can-get-for-free couponing days.  Not that I’m against free, or that I won’t go back to getting freebies when my schedule changes again, but having stepped away from it for a while, I can see very clearly that I never really needed anti-itch-scalp-wipes.

I decided to donate the things that I “bought” over a year ago and still have never used.  I threw away things that couldn’t be donated, like the unopened sample bottle of excedrin, which expired last year and whose packaging had been used as a lip blotter. 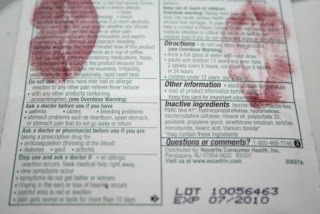 Yes, I have issues.

I then followed my own decluttering questions and took things to their proper homes.  The guitar strap went to the . . . guitar.  (Don’t worry.  I’m confused too.) And the dustbuster charging station went to the dustbuster.

The dustbuster which hasn’t been used in a very long time, perhaps several years, because I didn’t know where the charger was.   Now, if there is a challenge to go back and see if your dustbuster really does work once it’s charged, maybe I’ll remember to check on that.

And here is the after picture: 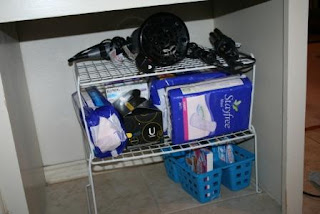 Far from an organizer’s dream, but I’m pleased because I purged all of the unnecessary stuff that I’d been holding onto for years.

I thought about calling it quits after that success, but since I could reach my actual under-the-sink cabinet without getting up, I decided to give it a straightening as well. 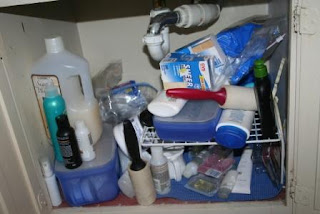 I purged several lotions which smell good, but I’m always too afraid to use for fear that they’ll get my allergies going.  I put my bubble bath by . . . . the bathtub.

Maybe that way I’ll remember I have it. 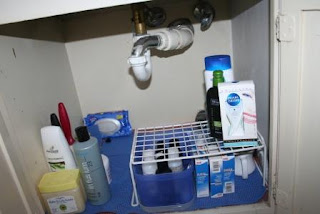 So excited to find a big bottle of conditioner that I didn’t know I had!

I also found something that I had to pull out completely before I realized what it was.  It looked totally unfamiliar to me. 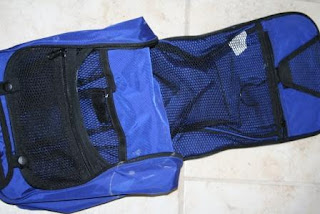 It’s a handy-dandy L.L. Bean travel case, with all the doo-dads-and-pockets-and-such that an organized person (like my mother) could dream of.

Too bad you also have to be organized enough to store it somewhere where you’ll remember you have it.

All in all, I mostly purged and straightened, and didn’t do any container-izing or labeling.

I’m good with that.

Go check out more Under the Bathroom Sink Projects at A Bowl Full of Lemons. 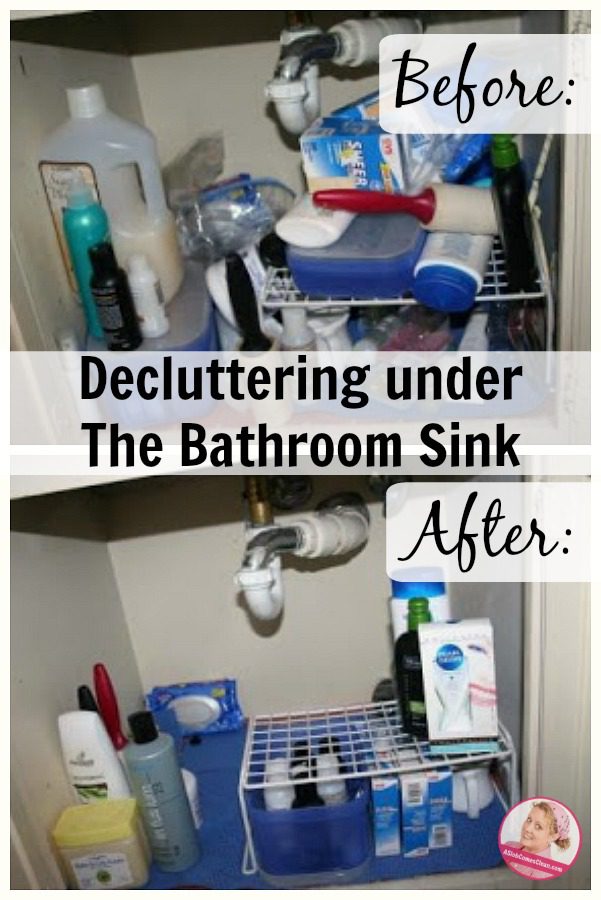