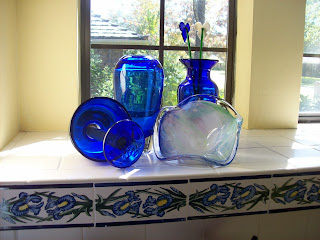 Last week, I did the Big Kitchen Scrub-Down.

I didn’t take a before picture, because I didn’t think it would make that much of a difference. The issue we were dealing with was grime, not clutter, and would that even show up in a photo?

I should have known better.

First of all, the difference is truly huge. I’m guessing it would have shown up.

Because I’m not about to go back and sprinkle dirt and dead bugs in my window just to see.

But I’m also frustrated that I didn’t take a before picture, because I have no idea how to put back all of the stuff that was displayed in my kitchen window.

My mother creates most of the little tableau-thingys around my house. Really, there aren’t a lot of them because most surfaces collect clutter quickly and the clutter swallows up the art.

But my kitchen window is different. It’s a rare place where it makes sense to have a display of breakable items. No one runs by and knocks into it, because it’s completely inaccessible. So inaccessible that you have to literally climb up on the counter and stand behind the sink to get to it.

My mother had artistically placed quite a few pretties up there. But after I got them down to dust them (ok, ok . . . to scrub off the glued-on-by-kitchen-grease dust), I had no idea how to put them back and not have it look like a big mess.

I started by putting up my favorites, and then realized that I was ok with how it looked.

So, I stopped. Total unintentional decluttering.

But I’m not sure it counts because I didn’t actually get rid of the stuff. It’s under the kitchen sink.

Read Newer Post How to Clean a Messy House . . . and Get It Ready for Guests! (with a Printable Checklist)
Read Older Post How Much Can A Slob Do In Fifteen Minutes?