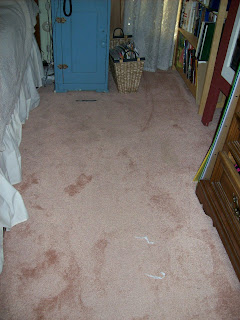 As someone who rarely (OK, never) thinks to check pockets before doing laundry, I wash my fair share of Kleenex.

Therefore, since my bed is the folding spot, I end up with quite a few of those white doo-lollies seen in the bottom right corner of the above picture.

Now, for me . . . that picture could totally be an after picture.  It’s in almost perfect shape considering my “issues.”

But, probably because of the overall neatness, my slob-brain did register the doo-lollies.  I realized they were there.  I realized that they marred the otherwise clear floor.

But it was Tuesday.

Yep, I had every intention of leaving them there until Friday.

And then . . . my recovering-slob-brain decided to do something crazy. 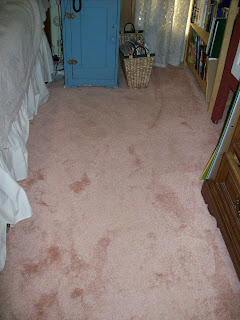 And I moved the pen (that was near the nightstand) off of the floor too.

A two second task, and now it doesn’t look “like I need to vacuum.”