This post contains complete and total honesty which may likely cause nausea in all readers, shuddering in most, and full-on flabbergastation in those whom I refer to as “normal.”

I’m a scatterbrain. I believe I was born this way.

I’m germaphobic. This was an acquired neurosis.

I procrastinate. This is just me not doing what I’m supposed to do when I should.

Those three things, working together, brought about today’s situation. I could probably re-name my blog: A Germaphobic Procrastinating Scatterbrain Comes Clean.

I didn’t mop last week. But, of course, as I’ve explained before . . . that’s the beauty of having a Mopping Day. Without a designated day, it would almost never occur to my scattered brain that the kitchen needed mopping. And when it did occur to me, my tendency to procrastinate would step in and talk me into “waiting for a better time.”

Knowing Thursdays = Mopping means that I stop and look at my floor realistically. Today was one of those days when I think, “How in the world did I go months without mopping pre-blog?” The floor was in crazy-obvious need of mopping. 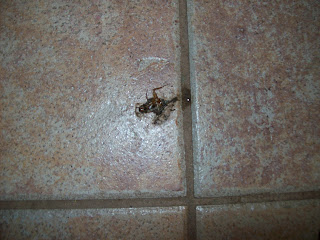 Really, I inserted that picture, and had second thoughts. It’s so disgusting. I’m afraid this is going to be one of those separate-the-housekeeping-strugglers-from-the-true-slobs posts.

Let me offer a series of (totally lame) excuses.

The bug man came at the end of last month. As I’m sure you know, while the bug man’s appearance means that you can sleep better at night, it also means that you are going to see more bugs than you saw before he came.

I, being a germaphobe, do not touch bugs. Even ones with six feet up.

So, when I saw this dead one a few days ago, I made a mental note to ask hubby to dispose of it for me.

But I must have lost that note, because I never thought to tell him about the bug when he was actually home. And it was in a place he really can’t see from his chair at the table.

And then someone stepped on it.

Unfortunately, I have no idea who did it. I’m choosing to believe that it was someone who was wearing shoes.

This morning, when it was time to mop, I had no more excuses. Hubby wasn’t home.

I had to mop, and even I, a slob, couldn’t justify mopping around the bug.

So, I layered three disinfecting wipes and scraped him up. I actually considered just mopping him up, but my germaphobic brain wouldn’t let me do that after picturing little bits of him being spread all over the kitchen.

The procrastinator-me allowed the germaphobe-me to justify waiting until I could get hubby to pick up the bug for me. But the scatterbrain-me kept me from remembering to tell him.