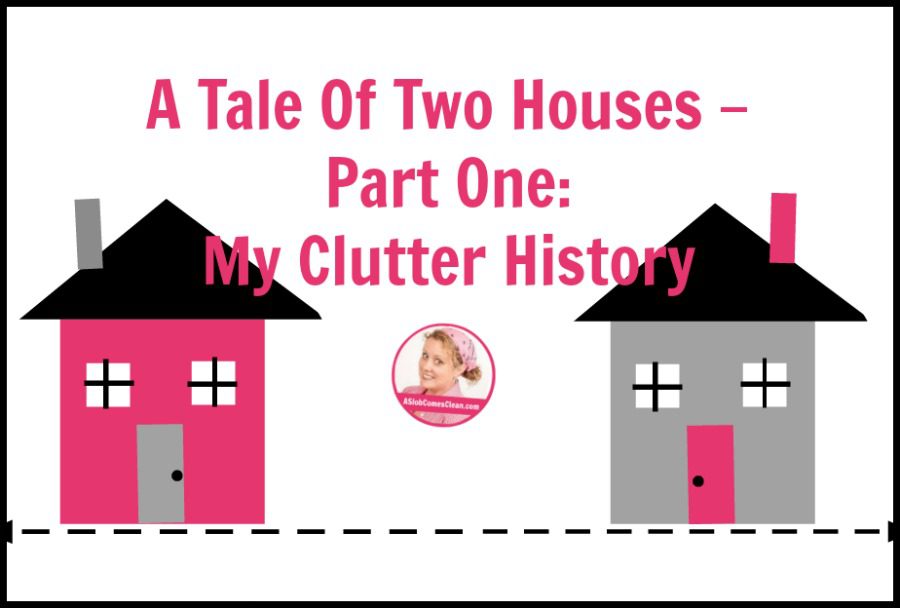 Last weekend, the kids spent two nights living it up with my mother-in-law, so we went to dinner with some old college friends of mine, and then saw their new house.They know about the blog.

It only made sense to tell them . . . since they are fully aware of my, ahem . . . issues.As theatre people, we were together pretty much every non-class-hour of our college career. She and I were roommates, and as her boyfriend, he was always around. There was no hiding my secret from them. Being overly hilarious, he’s about the one person in the world whom I wouldn’t have tackled for opening our master bedroom door and looking inside . . . just to make me mad. Which he did a year ago.

Their house is completely uncluttered. It’s very comfortable. I envy spaces like that, and I often feel bewildered, wondering how people are able to create them. But after leaving their house, it hit me. Because I’ve known them for their entire adult lives, I’ve watched how they have made it happen.

(I thought that this was going to be a cutesy little post comparing my journey to a grown-up house with theirs, but as I wrote, I was amazed at how emotional it was for me. Therefore, I’m dividing this into two posts . . . sharing my own “Clutter History” first.)

When I left college, I needed a u-haul. A big one. And none of the big stuff was mine. No couches, no appliances.Then I moved back in with my parents for about 8 months before I left for Thailand. My stuff . . . sat in storage for two-and-a-half years. A 10×10 storage unit was filled from bottom to top, since my mother is a master packer.

Think about what a normal person could fit in that size unit, and then triple it.I returned from Thailand and got married 20 days later. Per my instructions, hubby had found us an apartment with an extra room. It was a good sized room, and we filled it to the top, with all of my stuff from the storage unit. Still in boxes . . . waiting for the “someday” when we would surely need it. Never mind that our apartment, the part we lived in, had been fully furnished with wedding gifts . . . everything we needed. We were older when we got married, and we received A LOT of gifts.

Two years later (two years of that same stuff I brought home from college sitting in boxes piled to the ceiling of our “extra” room), we moved to our first house. The house had around 1750 square feet (no basement or attic) and once I unpacked everything, even getting rid of tons of stuff we didn’t need, every nook and cranny and under-the-bed space was filled.

Four years, two babies, and several garage sales later, we moved again. According to the way U-haul sizes their trucks, the amount of stuff we moved out of that 1750 square foot home should have come out of a 3200 square foot home. And we made several additional mini-van-filling trips.

We moved into a rental home while we waited for our home there to sell, leaving enough furniture to make it show well, but still having plenty to be able to function in our rental. The rent house’s garage was completely filled with boxes, and an entire bedroom was devoted to “storage” as well. Once our old house sold, and suddenly there were no suitable homes for sale in our small town, we rented a storage unit because we had a baby coming and literally had boxes to the ceiling in the living room.

Still, our newborn daughter had to sleep in a storage room for the first three months of her life.I lived for almost a year among those boxes, and hated it. I felt confined and smothered . . . but when looking for a house, one of my non-negotiables was that it have an “ebay room.”

Somehow, this seemed normal to me.When we finally found our current home . . . the one that should last us forever . . . I knew things needed to change. If something didn’t have a spot . . . I had to get rid of it. My goal was to get rid of half of what was in every box, and I did . . . sometimes even more.

But still, my blind spot was that storage/ebay room. I was into selling on ebay . . . big time. I bought and bought and bought at garage sales, buying at a much faster pace than I was learning which things were sure-sells. I did do pretty well selling, but the cost to our family was that a huge room of our home was being used for storage. Storage for things that I didn’t even personally want.Three years later, I was at a point of desperation and started a blog to hopefully motivate myself to get out of the mess we were living in. Slowly, I’ve accepted that having an entire room devoted to storage is not healthy for our family. When I cleared out that room, I couldn’t believe the square footage that it added to our home. And it’s space that we use!

Through my deslobification process, I’ve also realized that having a “storage mentality” is a big part of my overall slob-problem. Having a room where things can be stuck if they serve no current purpose only perpetuates my problem.

Writing this post has turned out to be much more emotional than I expected. I thought that I was going to talk about the difference between how I got to the point of an ultra-cluttered home while my friends, in the same amount of time, got to a sleek and clutter-free home.

But in writing, I’m re-living the despair that I felt every time I saw the boxes. Individually, stuff can be debated. I see potential value in every broken pencil or half-used bottle of glue. But when you put it in boxes, you see its actual mass. And it’s the mass that weighs on my soul.

If something is stored away, in a mass of random things, it is useless. Items in boxes do not improve our family’s life.

In an effort to keep this a blog post and not a novel, I’m going to stop here. Tomorrow I’ll share my opinion/observations on how they got to a completely different point in the same amount of time. 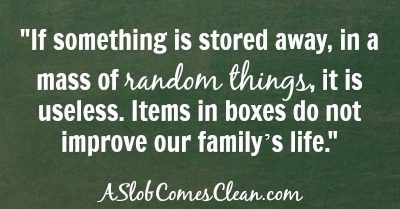 —————————————–
And lest anyone worry that they might be offended if I write about them, let me assure you that as spotlight-loving-thespians . . . they’ll be fine. When I told them about the blog a few months ago, they were hurt that I hadn’t written about them yet.
Here’s part two.