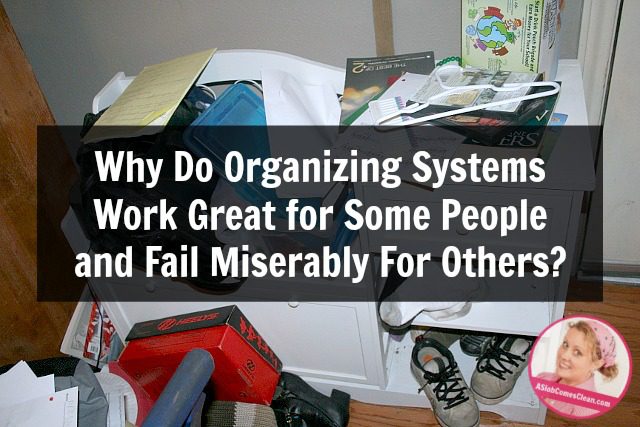 Why do organizing systems work great for some people and don’t work at all for other people?

There’s nothing more frustrating for a naturally disorganized person than to implement a “perfect” system exactly as prescribed, only to have it fail.
Believe me, I know.
Every time I failed at another “tried and true” organizing system, I had less hope of finding one that worked. I assumed I was hopeless at being organized.
So what is the difference? Why do the same cute white baskets (or cute white bench) look amazing in one home and like a jumbled mess in another?

My Clutter Threshold is the point at which I have more stuff than I can handle.
Than I, personally, can personally handle.
If a space in my home has more stuff in it than I can handle, that space gets out of control.
The organizing system I use isn’t the determining factor in whether a space stays organized.
The factor that determines whether a space stays organized is the amount of stuff in that space combined with my own ability to handle that amount of stuff.
I’m the determining factor.
Some people can arrange huge amounts of stuff in buckets and baskets and rows. I can do that, too.
But they pull out what they need without completely undoing the system.
I can’t do that.
When I’m focused on finding something (usually at or after the moment I need it), my brain definitely doesn’t include straightening baskets as part of the task at hand.
I go about doing whatever I needed the thing for, and the next day/week/month, I suddenly notice that my formerly organized space is a disaster again.
Making an effort to notice what I’m doing (or not doing) and focusing on slowing down and completing tasks is helpful. I’ve improved at this over the years.
But “trying to do better” isn’t a guaranteed solution to the problem. Especially as someone who gets distracted easily. Life happens, I get into a project, and I lapse back into my dig-out-what-I-need-right-now-and-leave-the-rearranging-for-later-when-I’m-not-in-the-middle-of-a-project ways.
You know what actually solves the problem of keeping a space organized? Decluttering that space until it’s under my Clutter Threshold.
No organizing system will work in my home if I’m trying to keep more stuff than I can personally handle.
Because of how I function, I need there to be less stuff in a space so I can find and get to the one thing I need without having to move six other things.
How do you find your Clutter Threshold? Declutter. It’s the only way. If a space is consistently out of control, declutter it. If it continues to get out of control, declutter some more.
One day, you’ll realize the space that once overwhelmed you has been staying under control without angst.
That’s when you know you’ve hit your personal Clutter Threshold.
Just declutter. Having only the amount of stuff they can personally keep under control is how organized people stay organized. Even if they don’t know that’s what they’re doing.
If you’re feeling overwhelmed with stuff, you need my book: Decluttering at the Speed of Life. I teach you everything you need to know to reach your Clutter Threshold and get control of your home. 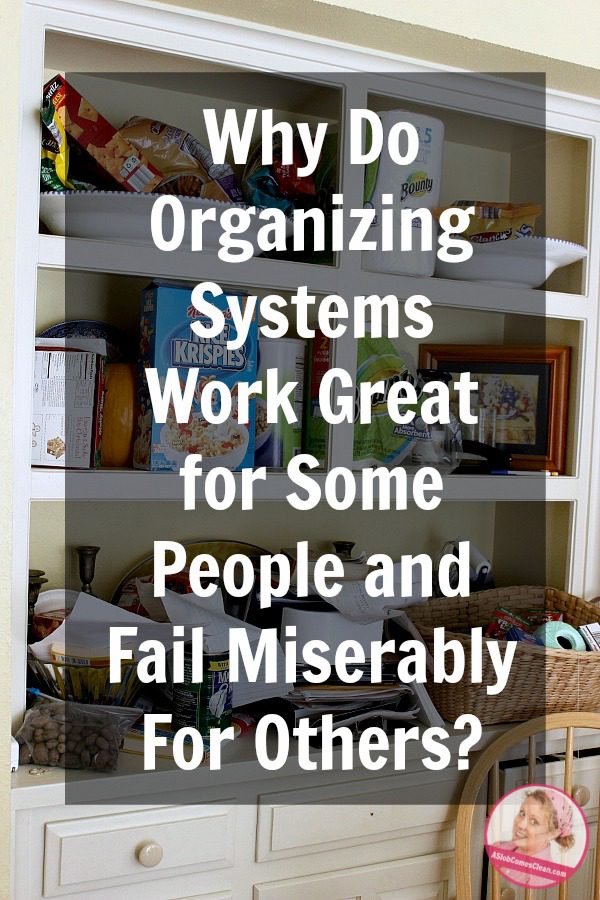