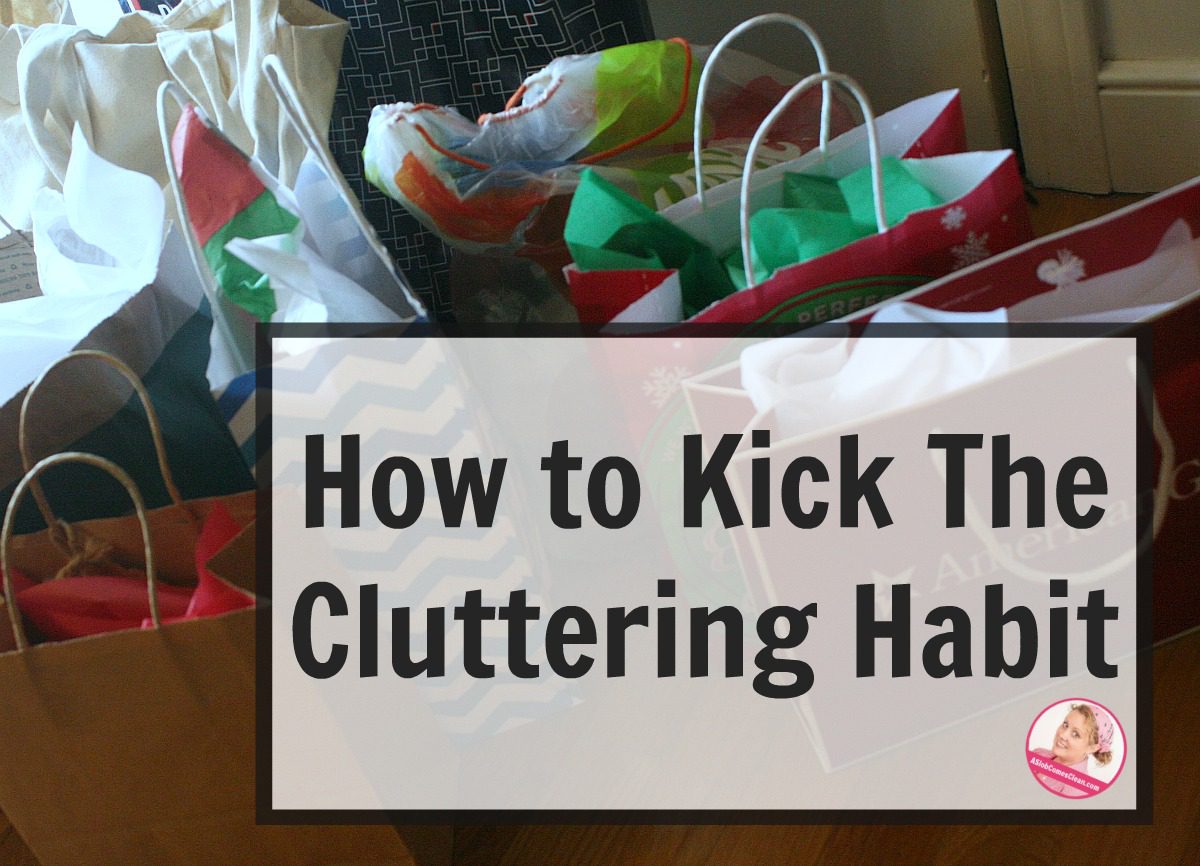 This is going to seem like a stretch for a moment, but I promise to give you a surefire way to stop shopping, even if it’s a habit, when you’re ready to declutter because all the stuff in your home overwhelms you.

To get there, though, I need to talk about soy sauce.

As a young child, I loved soy sauce. I wanted to eat soy sauce on everything. It was a battle that wearied my mother.

But one day, suddenly, I stopped eating soy sauce and didn’t touch it again for years.

What caused this sudden and easy change at the age of five? How did I go from loving something one day to being completely grossed out by it the next day?

If you lived in the Dallas area in the 70s and 80s, you might know the beloved (at least by my parents) weatherman from channel 5.

I walked into the living room during the noon news one day and the grossest thing I’d ever seen in my entire (short) life was on the TV screen. An actual heart. Beating.

Harold Taft was having open heart surgery, and they were showing the actual surgery on TV. The actual, camera-pointed-at-his-open-chest surgery.

So . . . completely . . . disgusting. I’m sure another kid across town saw the same thing and decided to become a doctor. I did not.

I expressed my horror and my mother explained what was happening.

“Well, he ate things he shouldn’t have eaten and didn’t exercise like he should.” – Dana’s mother (Sorry, Harold, for my mother throwing you right under the bus.)

And this is the part I can see so clearly in my memory. A lightbulb went off in my mother’s head. This was her chance. She gave me the side eye and remarked too casually, “Oh . . . I don’t know. Probably . . . too much soy sauce.

I was done. I didn’t eat soy sauce again until I was in college. I couldn’t stand the smell of it or the idea of it and never again craved its salty goodness.

In that opportunistic-for-my-mother moment, I broke a habit. I abruptly eliminated a craving.

I’ve often wished it were always that easy to break habits.

Like shopping. A big part of shifting the tide of clutter in my home was putting a stop to my excessive shopping.

I loved a bargain. Especially a pennies-on-the-dollar bargain from a garage sale. Loading my car (and my garage and my closets) with bargains is a big part of what got me into the mess that led me to start an anonymous slob blog back in ’09.

People who don’t love to bargain shop don’t realize that bringing stuff home can be a habit, but people who do love to shop know how difficult changing this way of life can be. I can abandon a good habit without even noticing, but a bad habit will wrestle me to the ground to stick around.

So how did I stop the shopping habit?

I can’t recreate the instantaneous aversion brought about by my mother’s anti-soy-sauce campaign, but I told that story because, over time, creating an aversion to clutter is what broke my shopping habit.

The urge doesn’t exist. The urges might as well have been surgically removed from my psyche.

I’m telling you, this works.

This isn’t fun. But the unfun action of decluttering did several things for me.

My house looked better and functioned better. A room with less stuff in it looks cleaner and neater and more inviting than one with more stuff in it. As I started to experience my house looking cleaner and neater and more inviting, I was motivated to keep decluttering. Continually decluttering meant that my quest for less stuff was on my mind all the time.

I started to appreciate open space. When my house was packed full of stuff, I almost never had open space.

Because I hadn’t experienced empty spaces in my home, I didn’t know how much I liked them. I didn’t know how much I’d appreciate not bumping into things in the middle of the night or how nice it would feel to not have to rearrange the entire room or shift piles of clutter from one side of the room to the other when spilled coffee spread under the couch.

New stuff coming in was a threat to the open space I liked. And that made me not want the new stuff.

I experienced the pain of purging things I once enjoyed purchasing.

This is the most important one.

Giving away something I paid good money for was difficult. Really difficult.

This pain is good.

The pain, regret, and honestly . . . the self-loathing I experienced when getting rid of things imprinted itself on my brain.

And when I walked through a store or a garage sale and saw a bin full of perfectly good backpacks, that brain tattoo flares right up.

The memory of the pain of decluttering often triggers an actual physical response.

I find I have an aversion to things that I know (from the experience of decluttering other things) will most likely turn into clutter. Bargains don’t look the same to me anymore.

In the same way that food poisoning can turn you against what was once your favorite food, the completely unfun task of decluttering will change how you see the sparkling treasures on well-lit shelves.

If you’re trying to break your shopping habit and want to make a deal with a friend who you can text in a moment of weakness, make the deal. If you want to cut up your credit cards, go for it. If you want to snap your wrist with a rubber band every time you find yourself walking toward the clearance section, snap away.

I’m telling you, it works.

If you’re thinking “Yeah, but how do I even start decluttering?? I’m so overwhelmed!!” I understand. I have lots of resources for you. I highly recommend you start with my book, Decluttering at the Speed of Life, which is available wherever books are sold in any format you prefer. (Paperback, digital, or audio)

There are many, many other resources here on the site as well. Podcasts, blog posts, videos, and more. Read all about those here.

Please note: I’m not anti-soy-sauce. This isn’t a post against it. I eat it now, though it doesn’t hold the same magic for me that it did back in the late 70s. I also am now a mother with a child whose excessive love of soy sauce is total payback for what I did to my own mother.

Also please note: I’m very thankful for my mother’s willingness to be discussed on the internet. She’s written a new children’s book which you should totally check out through my affiliate link here. 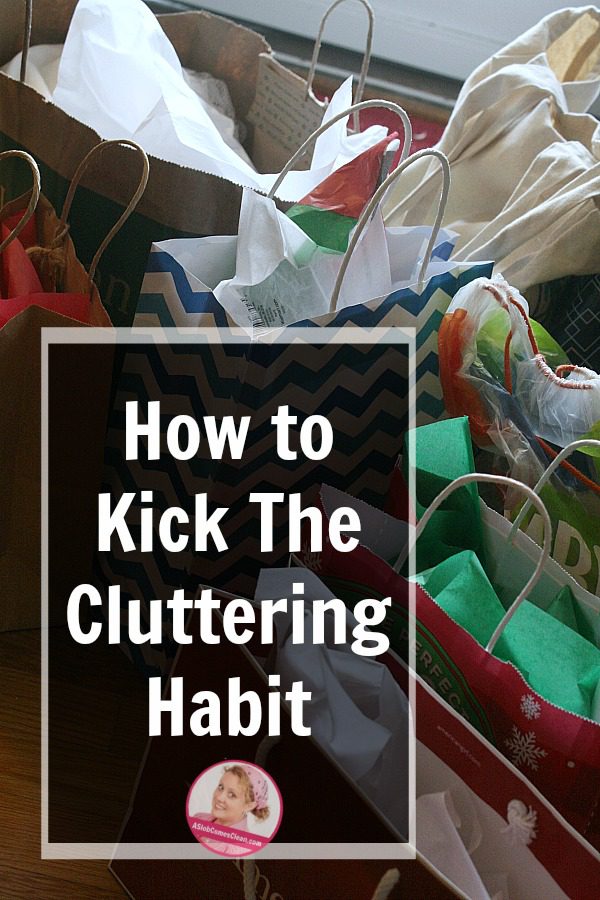