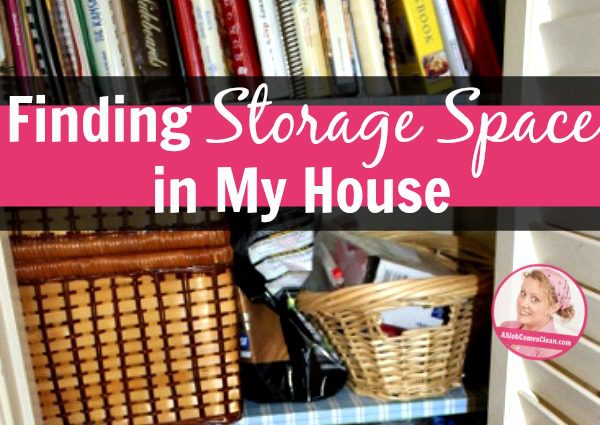 One of my best/for-realest reasons for clutter is I don’t have much storage space in this house.

I have a tiny coat closet, one cabinet in the gameroom, and a pantry. But y’all, I’ve seen storage CLOSETS in other people’s houses. Like, closets for no other purpose than storing stuff. One house we looked at had, like, FOUR walk-in storage closets.

Mmmm-hmmmm. If I only had those, I’d be totally organized.

Except I don’t. I have what I have.

And since I didn’t become magically organized all the other times when other if-onlys came true, I’m pretty sure four walk-in storage closets wouldn’t do the trick either.

One of my big frustrations has been my lack of space to store our Brownie troop supplies. We meet in my house. We have supplies. Those supplies need a home, but I didn’t think I had one for them.

So they sat in the floor of my master bedroom.

A totally bad idea, but I couldn’t think of a better one.

But then, I glanced up from my breakfast table and saw this: 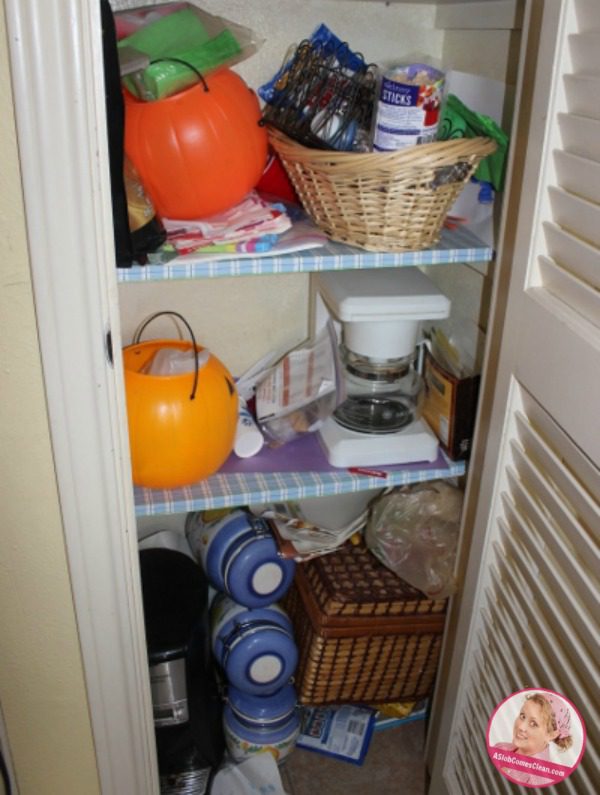 I think of it as my pantry, but all the pantry-type-stuff is stored in its twin on the other side of the room.

I suddenly realized this legit Storage Space was storing stuff I didn’t even need.

Why did we stick it in there instead of throwing it out?

There was also a picnic basket we don’t use, lots of randomly placed napkins and such that could likely be consolidated, and canisters I bought a LONG while ago at a garage sale but never used because I’d have to scrub/de-funkify them first.

The fact that I still hadn’t de-funkified them and still didn’t feel like de-funkifying them right then made me realize they could go. Let someone else think they’re cute and actually do what needs to be done to USE them.

Moment of Realization: I was storing things I didn’t need, while I “didn’t have room” to store things I did need.

So, as the Second of Two Things I tackled that day, I cleared out the cabinet to see if it could hold our Brownie stuff. 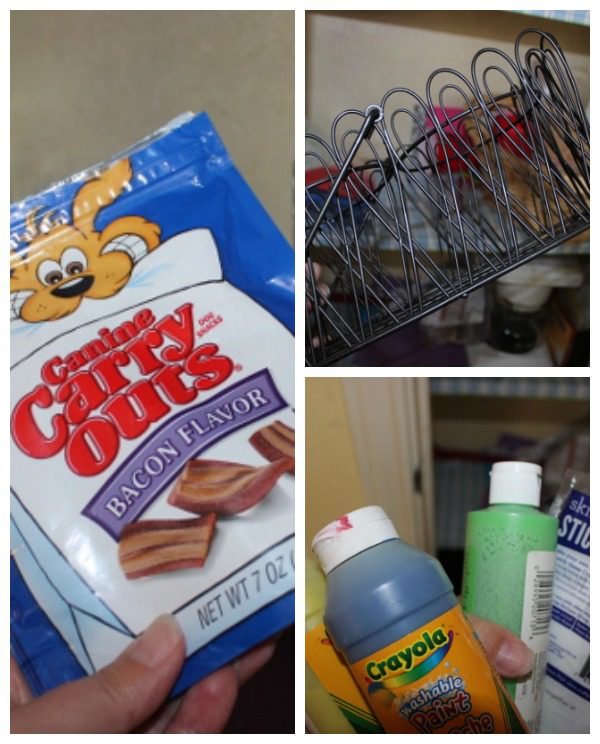 On the top shelf (of the three I decided to purge), I found craft supplies, dog treats, and a cute-but-haven’t-found-a-way-to-actually-use-it basket. The craft supplies were victims of me asking “Where would I stick it?” instead of the much better question: “Where would I look for it?”

Once upon a time, this cabinet WAS our craft cabinet. But it’s not anymore. We look for craft supplies in the gameroom. But I (obviously) still stick stuff in the old place sometimes. I took it where we would look for it. RIGHT then.

Dog treats? Hmmm. Upon seeing them, I did remember putting them there, but if you’d asked me the day before whether we had any, I would have said we’re out.

Wait and see how wrong that was.

The basket? Who knows why that ended up in there. Cute as it was, it went straight to the Donate Box.

Once I removed all that EASY stuff and put the napkins and such into the basket where they actually go, I had some empty space on that shelf. 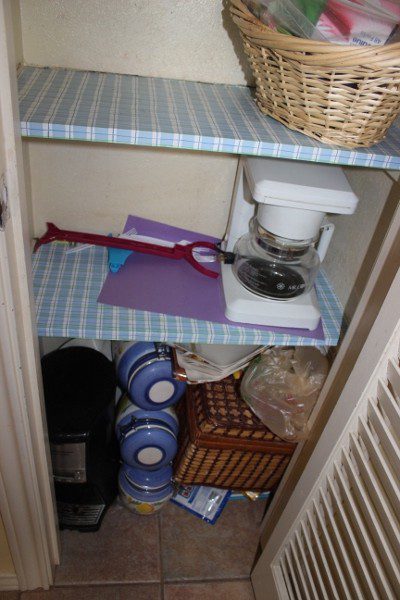 Empty space meant I could keep the picnic basket. THERE WAS A PLACE FOR IT!!! I don’t want to talk about the “we never use it” part.

And do you see more dog treats peeking out from under the picnic basket?? 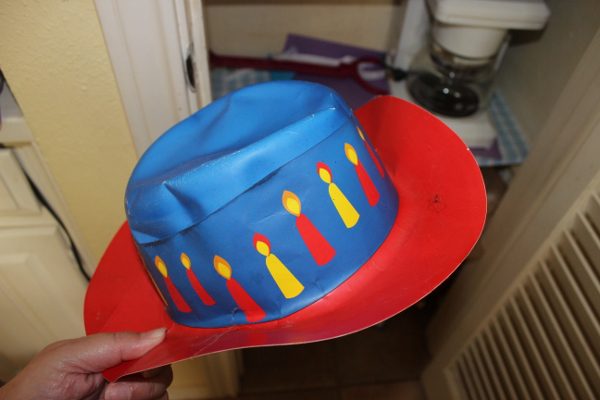 Mmm-hmmmm. THAT was worth storing for all these years. I could have returned to the dollar store for another one if we ever needed it. 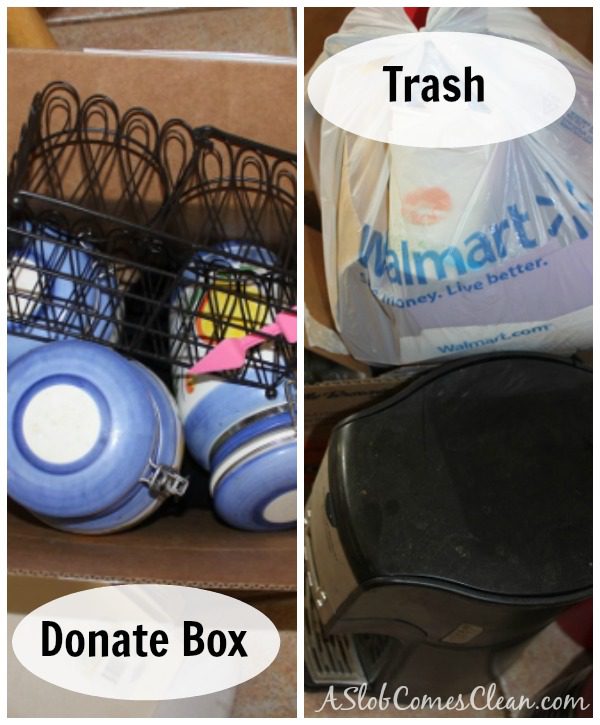 Some donations. Some trash. And then it looked like this: 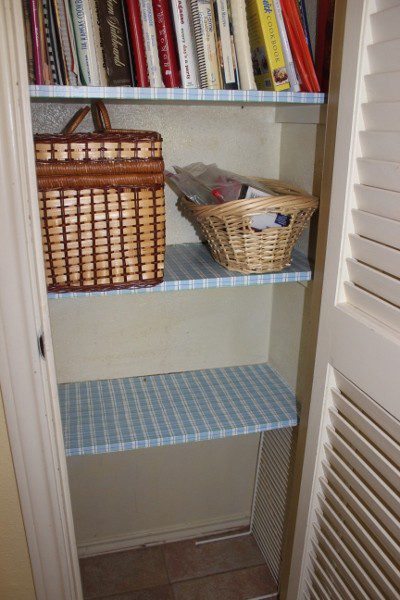 Time to gather the Girl Scout stuff. As I put things in there, I discovered there was quite a bit of trash in the bags and boxes of Brownie stuff I’d assumed were important enough to take up master bedroom space.

But after purging trash and consolidating what we needed to keep, it ALL fit into the cabinet I hadn’t even considered a possibility a week before. 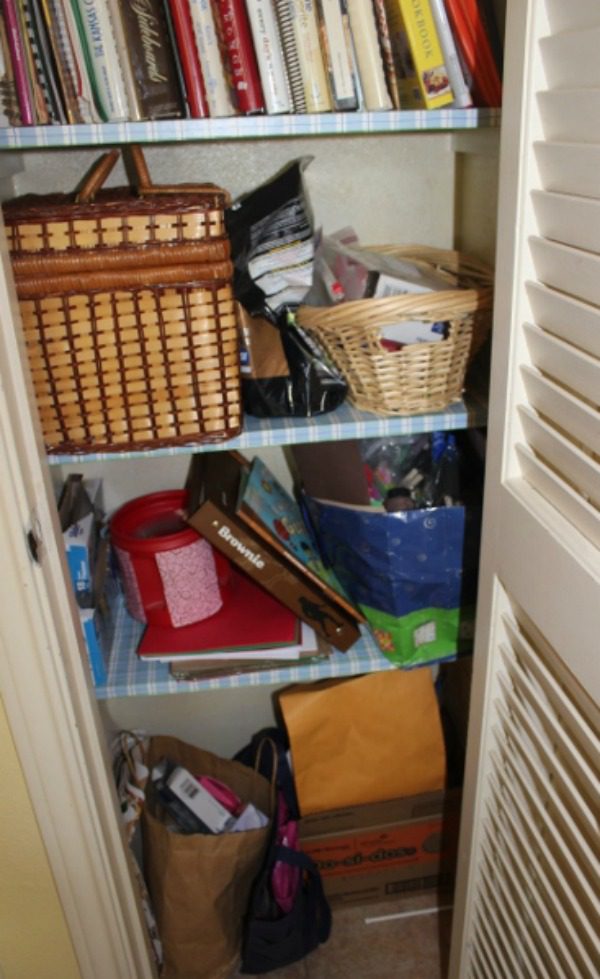 Not an organizing masterpiece, but I was happy(ish) about this: 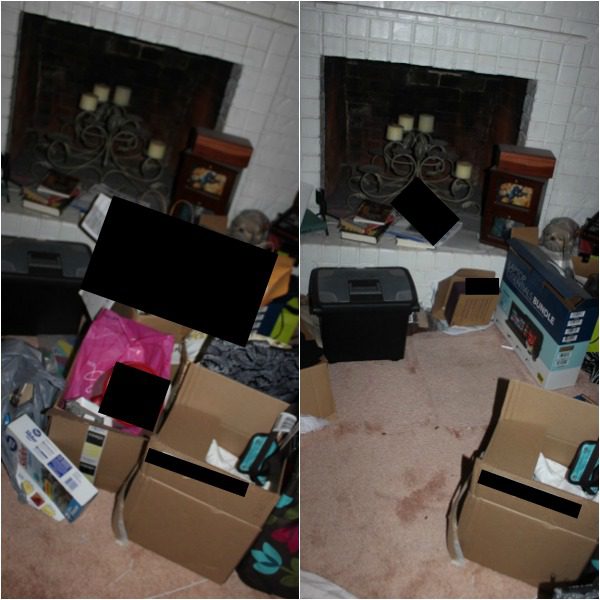 Happy(ish) because while I was glad to get the Brownie stuff put away, I was irritated that other, non-Girl-Scout-related things were in that pile. In my mind, this project was going to solve the entire pile problem.

But, as piles are rarely exactly what I think they are, it didn’t.

But I’m choosing to be glad I did this. I proved to myself that I do have more storage space than I think I do. I just don’t have space to store stuff that doesn’t deserve storing.

I’m also glad for my own (oh-so extensive) decluttering experience. Once upon a time, I might have come up with this solution but would have ended up Stuff Shifting. Moving the G.S. stuff into that space and putting the other stuff in a box to be dealt with later. Y’know, when I suddenly stumbled upon the storage space I hadn’t noticed yet in the nine years we’ve lived in this house.

But because I have grown to love the feeling of Stuff Leaving, the Donate Box and the trash took care of the things that didn’t have a definite home somewhere else in the house.

I made progress. Not a bigger mess. Yay for that. 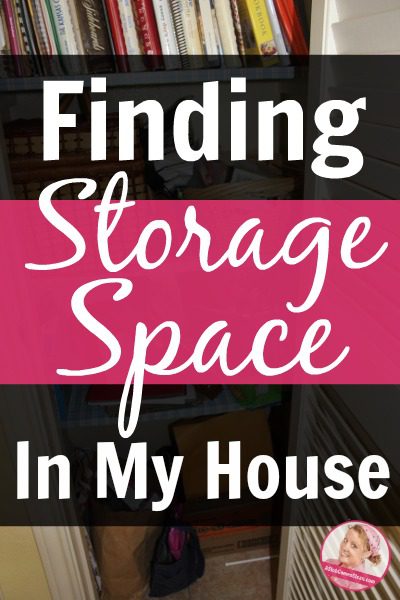 Read Newer Post How Many Do I Need? Not that many.
Read Older Post 061 Declutter without Distraction