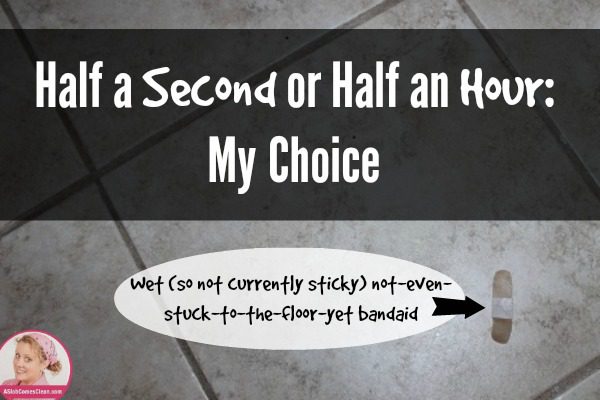 Poor little me had a band-aid on my poor little finger last week.

So I used a band-aid. And then took a shower. And then the band-aid fell off.

I felt it fall. I saw it on the floor.

And I walked right on by.

And then I stopped to stare off into the future. The future which I know exists due to my past.

I saw myself FINALLY getting that blankety-blank band-aid off the floor. In the vision, I’m wearing rubber gloves.  In fact, I’m all decked out for bathroom cleaning. My forehead is glistening/sweaty and my countenance determined.

And then I see my Future Self look straight into my own Right Now Eyes. And I say, “Don’t wait. Do it now while it’s just a band-aid.”

Finally, the Right Now Me gives in, bends over and takes the half-second required to pick up a not-yet-stuck-to-the-floor band-aid and throw it away.

Even though Right Now Me knows that Future Me was being a little dramatic, her incessant drama is exactly the reason why she/I/whoever would have put off this task until it took waaaayyy more than half a second.