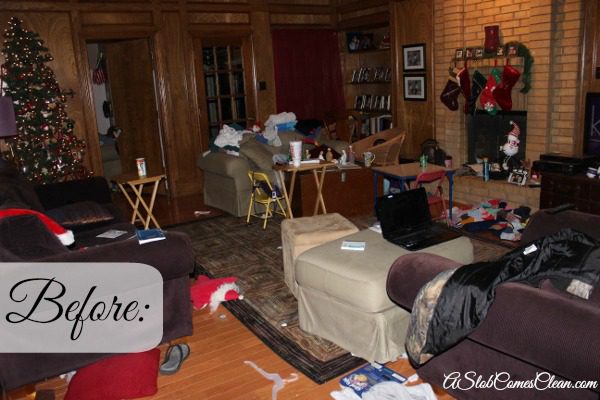 For real. It totally does.

But in the beginning, when Family Pick-Up Time was a totally new thing, five people times five only equaled about three minutes worth of progress. On a GREAT day, maybe ten.

Let me clarify, just in case you’re thinking to yourself, “Wow. She is so good. She’s been training those kids on the five-minute pick-up every day for years, so of course it has paid off!”

I gave this post the alternate-title of The Benefits of Random Intentionality for a reason.

I’m all about intentional parenting. Setting guidelines for TV and video game time? That comes  naturally to me. Saying “no” to excessive commitments that steal family time? Got that down.

Sitting around the table together, eating a home-cooked meal almost every night of the week? Yep. A total no-brainer.

But consistently doing a Family Pick-Up Time? Almost never occurs to me.

It’s why I check “Focused 5-Minute Pick-Up” off the Daily Checklist whenever I happen to be going through the checklist. If the kids are around, they help. If not, I go ahead and do it and then tell myself we’ll do another Pick-Up together later. (My house never doesn’t need a second Pick-Up.)

Because that’s the issue.

While homework and family prayer time enter my mind consistently at the exact same time each day, stopping to pick up before bedtime does not.

I wish it did, but it doesn’t.

Because of my innate randomness in certain things, I’ve often struggled with a “What’s the Point?” attitude. After a certain number of failed we’re-going-to-change-how-we-live-starting-right-now attempts, knowing that consistency will be my biggest enemy can make me lose heart and justify not even trying.

But that’s wrong. My kids are now 7, 10 and 11. I’ve been at this deslobification thing for more than four years. They know what a Family Five-Minute Pick-Up is, even if it isn’t a daily thing.

Back when they were younger, I wouldn’t have believed they were learning anything from our five minute pickups. As I pointed out every single toy or paper on the floor, it all seemed so futile.

But they did learn.

Being intentional here and there when the thought struck me? It paid off.

And now, on days like last Sunday, I can set the timer and see real benefits from a random five-minute pick-up. 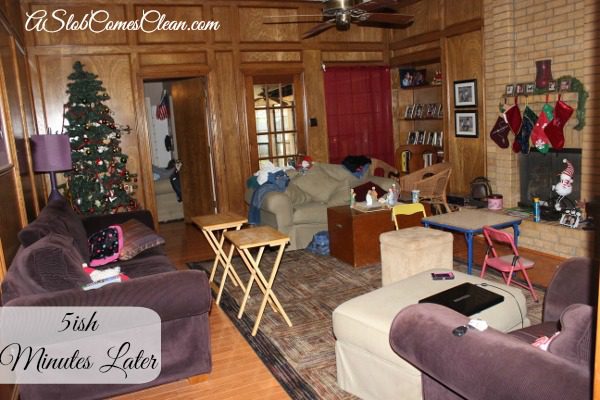 Not that it’s perfect. Certain picker-uppers took advantage of the fact that mom spent the first three minutes in the kitchen, sticking frozen pizza in the oven.

But after adding a few extra minutes, we were able to watch Rudolph in a much-less cluttered room. And then this morning, I was able to remove the way-too-small table and TV trays and feel ever-so-much better about the room. 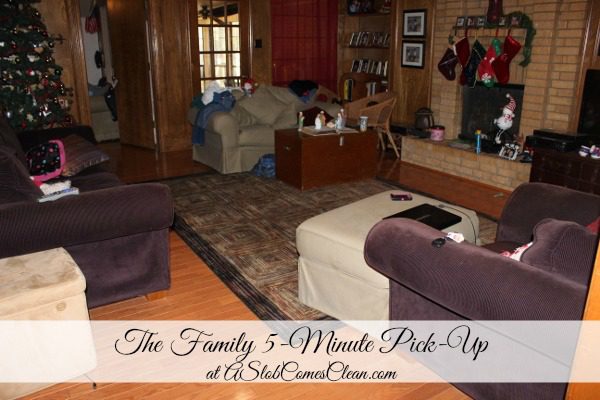 Go ahead. Be intentional today. Even if you forget tomorrow, it will be worth it.

Affilate Link Alert: Have you heard about Amazon’s 12 Days of Deals for Kindle books!

? In 2013, they offered 3 best selling books per day for only 2.99! This is only for the Kindle versions. I’m stocking up since a Kindle is on my wish list this year, but you can also read the books using a free app for your computer or smart phone. I’ll link to the 12 Days of Deals for Kindle books page each day. ANYthing you purchase on Amazon after you follow one of these links earns me a small commission.