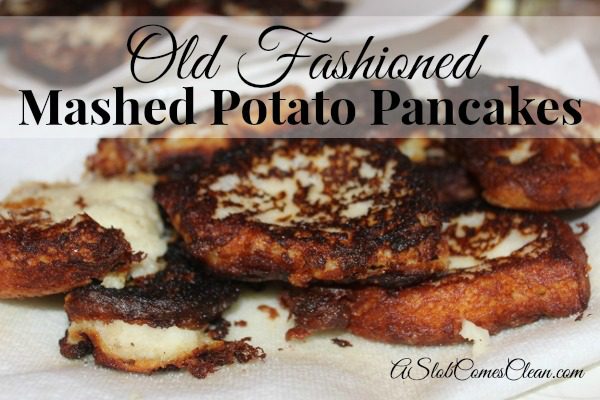 A few weeks ago, I mentioned on Facebook that I had once again failed at making Mashed Potato Pancakes.

As a child, I loved them. I even asked my mother to make them for breakfast at one of my slumber parties. My friends (who had never had them) were skeptical, but fell in love with them as well.

I had tried multiple times in the course of my adult life, but after the last attempt, I gave up hope.

I served my family stir-fried mashed potatoes for dinner. Which isn’t even a thing. And shouldn’t be a thing.

When I shared my failure on Facebook, about half  of you shared my frustration, but the other half gave ideas of how to make them work. It’s possible that I’d heard some of the tips before, but since I generally only attempt these once every two to three years, I had forgotten any advice.

So this time, I decided to try again sooner so I’d be able to build upon the lessons of my recent failure. AND, it just so happened that Formula 409 had asked to sponsor a post specifically about how you don’t need to be afraid of cooking greasy stuff since 409 cleans up grease so easily. 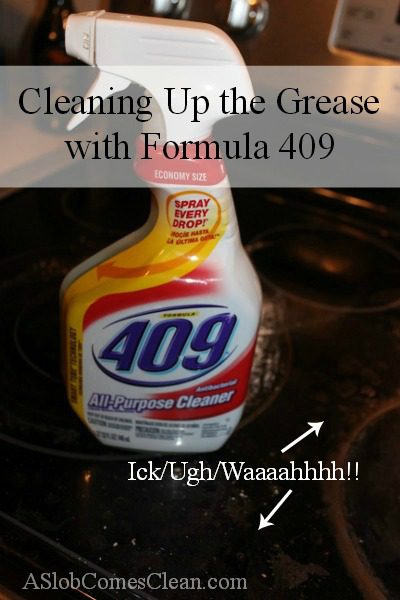 I don’t cook with grease very often (almost never, in fact), so the timing was perfect!

Because that was the other frustration of my recent failed attempt. Grease splatters everywhere. Ick.

The four things you all mentioned in your advice were: 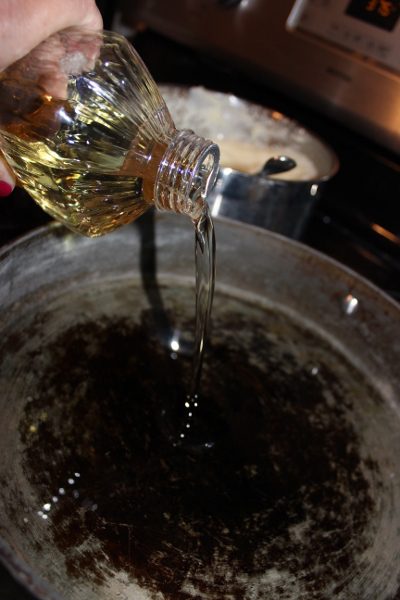 I put the oil in my skillet before I started dealing with the mashed potatoes so it would have time to get good and hot. 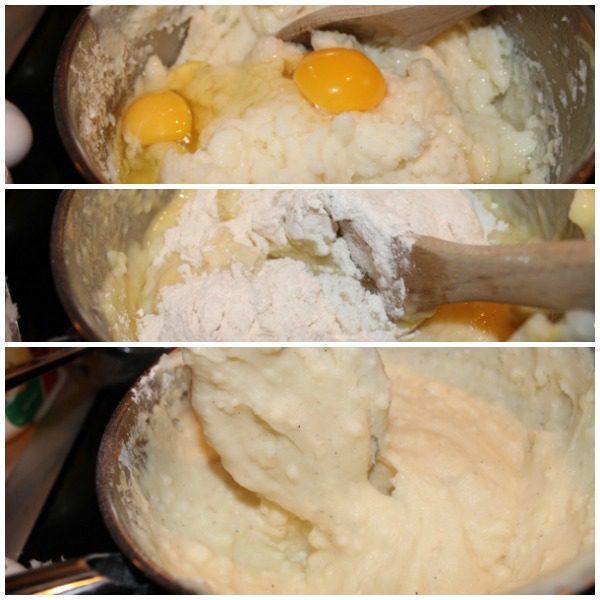 And I now understand why these are made from leftovers.

I added three eggs, 1/2 cup of flour and pepper.

I did the old test-the-oil-to-see-if-it’s-hot-enough trick: 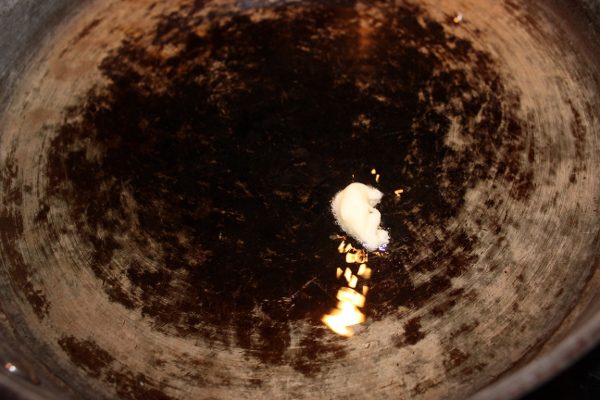 I decided it was. (I was guessing, since I almost never fry.)

I started dolloping them in, and could tell immediately that things were going to turn out better than the last time. 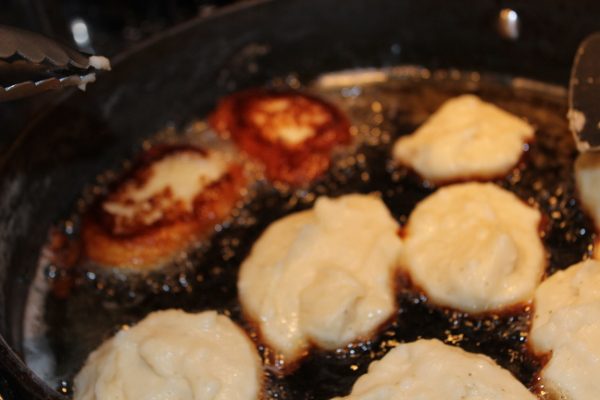 I tried to follow the advice I’d heard on cooking shows past. I let the edges get brown, waited to turn them until they were not sticking on the bottom and salted them as soon as they came out of the oil.

They were (mostly) perfect. The few casualties weren’t a problem since I’d made TWELVE servings.

I do believe I lived up to my 10yo’s request. When I told him I was making Potato Pancakes, he asked if, this time, I could make them the way Grammy makes them.

I may or may not have stifled a snarky response.

We enjoyed our dinner, and then it was time to clean up. When a company hires this Slob Blogger to demonstrate their product, they get a great deal. Not only did I have the grease splatters from the potato pancakes, I had potato boil over from the night before.

The night before when I basically boiled away the real potatoes I was making so I’d have leftovers for the pancakes.

Hence the potato flakes. (P.S. I’ve had WAY too many kitchen mishaps to share lately . . . )

I had come home from working on a video shoot and heard the dishwasher running. (Thanks, Hubby!) I didn’t even bother to walk into the kitchen once I heard that. So my Formula 409 was tested on day-old boilover AND grease.

This was my extra-messy stove top: 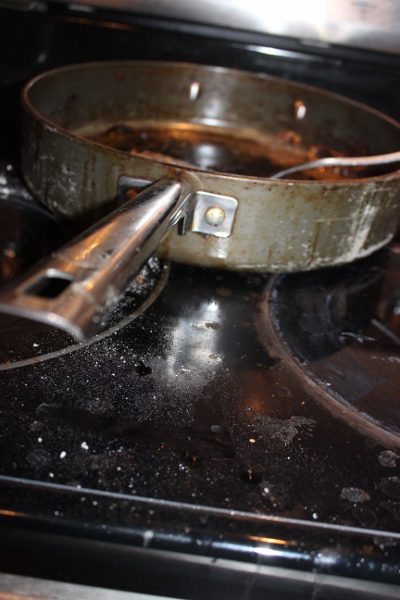 I sprayed the 409 and used paper towels to wipe it up. After ONE wipe, the stove looked like this: 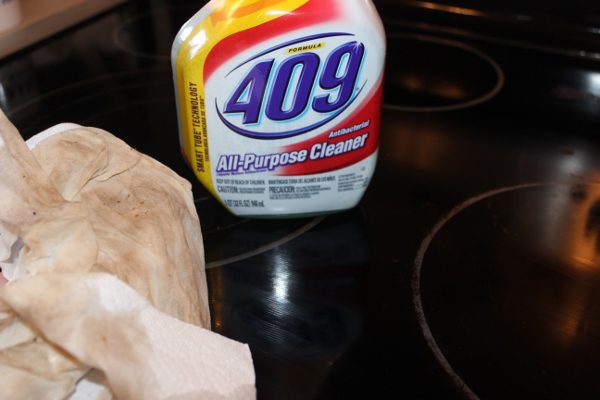 A little scraping of the burned-on gunk from the night before and another wipe-down, and it looked really great. I walked by several times later and smiled at my shiny stove top. 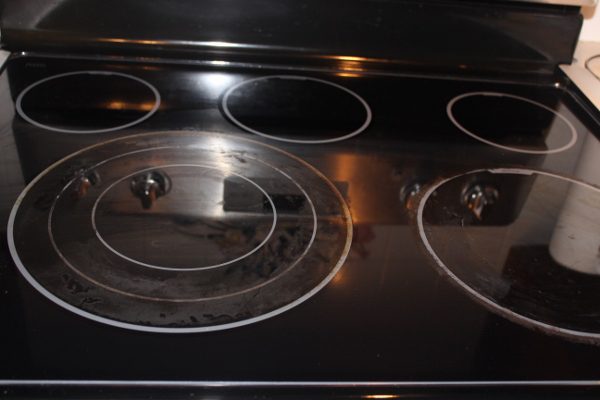 (Oh, and I did go over it with a wet paper towel to “rinse” the surface.)

First, the fear that I would never, ever be able to make Potato Pancakes the way Grammy makes them, and second . . . that cooking anything greasy means a huge and daunting clean-up process.

Some info about Formula 409:

Formula 409® Antibacterial All-Purpose Cleaner easily cleans grease and other kitchen messes, while killing 99.9% of germs on hard non-porous surfaces. Formula 409® is also available in Glass & Surface Cleaner, Natural Stone & Steel Cleaner and Carpet Spot & Stain Cleaner so you can degrease and clean many types of surfaces.

You can also download their guide to hosting a chili cook-off, which includes several chili recipes!

Thank you to Formula 409 for sponsoring this post and for giving me an excuse to get this recipe right!! I was given a bottle of Formula 409 and was paid for my time testing the product and writing this post. All opinions, botched recipes, and excessively-messy stoves are mine.