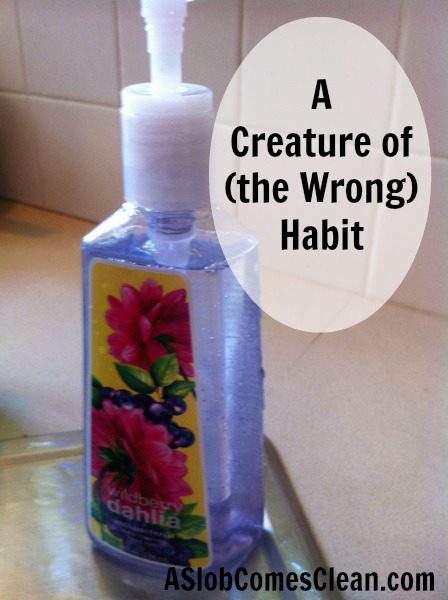 I thought of talking about how refilling the hand-soap dispenser is a two-second task.

Not that it’s actually done in two seconds. More like thirty.

Which still isn’t much.  It definitely doesn’t require blocking off three hours of my busy schedule like my brain tends to think it should.

This perfectly-good, perfectly-refillable soap dispenser had been lost in the clutter near my kitchen sink for . . . umm . . . a while.  I did know it was there, I just never re-filled it until my recent kitchen recovery.

But this post really isn’t about this soap dispenser, it’s about the one in my bathroom.

I HAD to refill that one.

I had to refill the one in the bathroom about a month after it ran out of soap.

No, I didn’t go a month without using soap! (Ewwww.)

I just walked the extra six steps over to Hubby’s sink and used HIS soap.

Because he had soap.

And somehow six extra steps times four-to-six times a day (at least . . . I drink a LOT of water!) for at least a month was less effort than re-filling my own dispenser with the jug-o-soap that was sitting directly under MY sink.

But do you know what?

And then walk back to mine.

Y’know. Since his soap is now gone.

Which is (let’s be honest) the only reason I ended up refilling mine.

Please. No questions on why I didn’t refill his too.

I have no answers.