I love the word versatile.

It doesn’t love me.

This one-sided relationship results in me dumping all sorts of things in my exceptionally versatile office/game-room/guest-room.

Oh, and I have one more excuse for this room.  It’s a doozy, and it piggybacks on the whole “versatile” thing.

I have plans.  Big ones. I’ve come up with some ideas for completely re-arranging the room to make it more useful in its versatility.  But these plans involve the departure of certain furniture pieces which requires the moving of stuff to other places and the heavy-lifting skills of hubby and the use of a truck.

All those requirements equal lots of procrastination.

So, I broke my Visibility Rule and cleaned out ONE shelf.  One shelf in a built-in cabinet that was full to the brim with random stuff I never ever use.  My goal was to make space so I could have a place for the things that really need to be in this room.  Then I could finally get rid of certain irritating pieces of furniture.

(Just so you know, I did this last week and have already learned how wrong my brilliant rule-breaking plan was.  More on that next week.)

Here’s what I did: 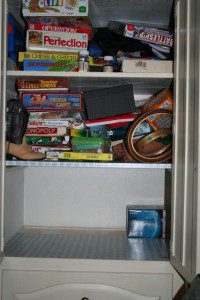 The bottom shelf is the one I decided to clean out.  I forgot to take a picture until after it was like this.  Trust me, it looked worse than the other two shelves.

At this point, I got my all-too-typical panic feeling, not knowing what to do with all of the stuff I had pulled out: 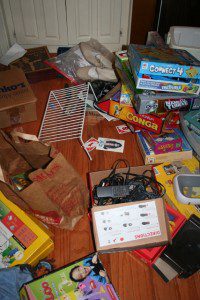 Stuff like cords-galore, a box of 500 don’t-look-like-me-anymore-anyway headshots, two pairs of (my) tap shoes, etc.

I decided to make this bottom shelf the game shelf, since it’s the one my kids can reach easily.  Yes, the games had been on the TOP shelf. 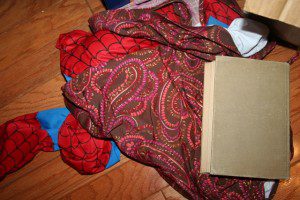 I sent quite a bit to the Donate Spot, including several ebay leftovers.  This used to be my ebay cabinet until it morphed into an entire ebay room and eventually led me to total despair.  And to start this blog.

That’s a maternity bathing suit that I found at a garage sale.  A good thing to put on ebay . . . but not in December.  Since it sat in that cabinet through the last two bathing-suit-selling-seasons, I decided to let it go. 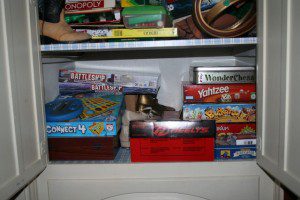 That’s the finished shelf.  Not a vision of organization wonder, but just a game shelf.

Which is so much better than an everything-you-can-think-of shelf that can’t even be used.

Then yesterday, I remembered that my 8yo is having his first sleepover with a friend tomorrow night and I promised him they could sleep in here.

Sooooo, next week’s webisode will be about how I changed that plan and did a 45 minute Fast and Furious Decluttering session to make the room usable!

Another Amazon deal alert – Have I mentioned my “thing” for laminators? Seriously, I’ve had a love affair with laminated stuff since kindergarten. I wonder if it’s a deep-seated desire for un-wrinklable paper? Anyway, there’s a great deal on laminators on Amazon right now. These laminators are on sale for only 16.99 right now on Amazon!

I’ll be linking this up to OrgJunkie’s 52 Weeks of Organizing, which I’m guessing are almost over!!!  Aaaahhh!