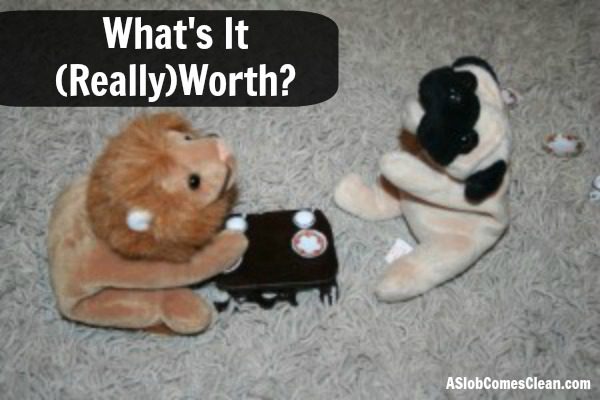 We spent some time at my mother-in-law’s house recently.  She brought out a bag of Beanie Babies that she recently decluttered. My daughter chose her two favorites to bring home.

Roary the Lion and Pugsley the dog.

I was in college during the Beanie Baby craze and missed out on the excitement.  I do remember being at a friend’s bridal shower, though, where someone talked on and on about how much money she was going to make “someday” because of all of the Beanie Babies she had collected.  And she paid top dollar for them, too.

Yet now, if you look at the completed listings on ebay, the vast majority don’t even sell for ninety-nine cents.

Pugsley is definitely more valuable than Roary, with one selling at 9.99, but other Pugsleys didn’t sell for .99 and 1.99.  As a way-too-experienced ebay seller, I definitely wouldn’t get excited about going through the hassle of taking a picture, creating a listing, and calculating shipping on the off chance that I might sell it for .99.  (Minus fees, of course.)

And yet . . . when my daughter ripped the not-so-snuggly tags off of their ears, my first reaction was, “No!  They’re not worth as much without the tags!”

The fact is that they’re worth much more without the tags. No toy is a “real” toy while the tags are still attached.  He’s real when he gets played with.  When he sleeps under the chin of a the little girl who just served his afternoon tea.