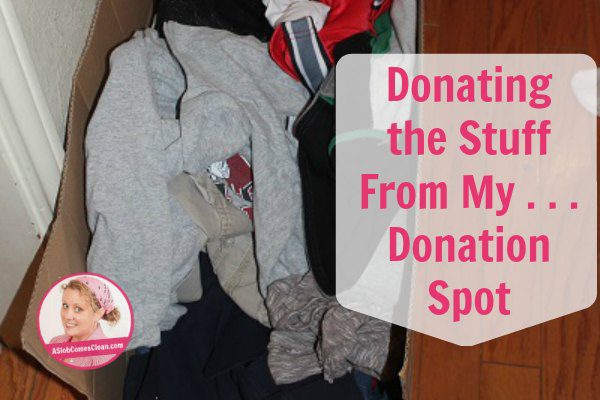 Step Two: Get the stuff you decluttered out of your house.

I love my donation spot.  But I realized the other day that it was as tall as I am.  It was no longer just a spot, but more of an area-in-which-to-practice-balancing-random-items-on-top-of-one-another.

Since this week has been crazy with helping out at the kids’ school every day for a fundraiser and a big freelance project, I just wanted to do something for my weekly decluttering project.  Emptying the far-from-inconspicuous donate spot seemed like a no-brainer.

Which was what I needed.  Something that didn’t require any decisions.  Everything in that pile had already been decided.

About 15 minutes later, it was empty.  Now I just have to remember to head by the local thrift store and drop it off tomorrow morning.

It probably would have taken even less time, but I did several takes of the special effect I created for my webisode.  Now you have to watch it, right? It’s my shortest one yet!

And I’m sorry about the lighting.  That’s one of the big disadvantages of being your own camera-woman and not knowing what’s going on until you edit the video later.  I promise, I do not suffer from Disappearing Face Syndrome, but thanks for your concern. 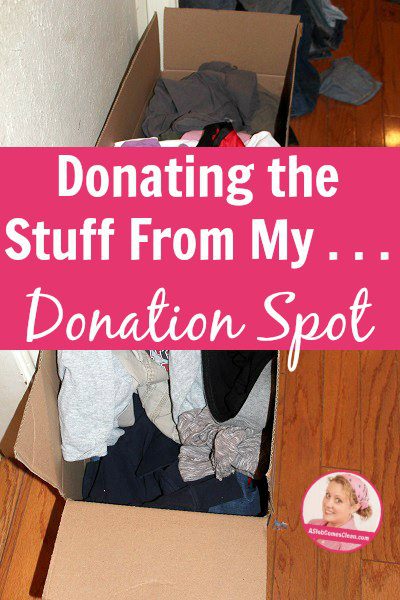 I’ll be linking this up to Orgjunkie.com’s 52 Weeks of Organizing.