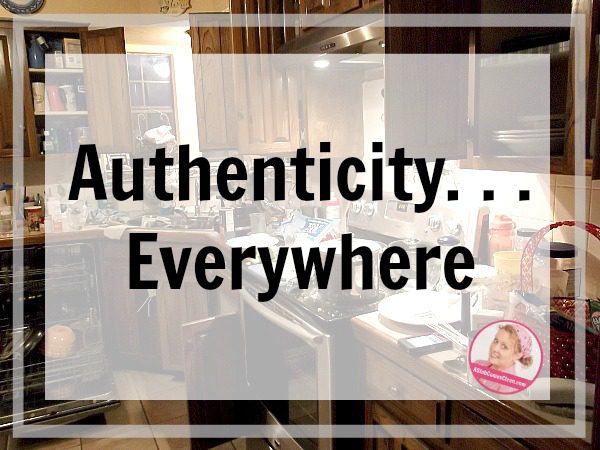 At least since I returned from the Women of Faith event I attended.

But what I kept coming back to as the thing God wanted from me . . . is so simple.

I loved going to the event.  Patsy Clairmont is who I want to be when I grow up.  She is one of the most gifted speakers I’ve ever heard.  I cried, then laughed, then cried again. I tried to fully drink in every word she said.  She completely spoke my language.

But the thing that has stayed with me wasn’t in my language.  In fact, it kind of irritated me and made me come up with lots of “But I’m”s in my head.

And I kind of think that was God’s point.

So much of what Patsy Clairmont said echoed and confirmed what I’ve been doing here on A Slob Comes Clean for two years now.

But God wants me to start working on another aspect. I’ve been completely authentic here on the blog.  It has been my safe place.  My place where I can say anything, after editing and deleting and using italics in all the right places.

And I’ve hidden behind the pink bandana.

Slowly, over the past several months, I’ve revealed more of the real me to you, my readers.  I put my non-costumed picture on my speaking page, and linked to a freelance article that used my full name.  I’ve shared more and more of me . . . in my safe place.

But I’ve been convicted that I need to share more of me . . . everywhere.  All of me. This part that was such a small part because I kept it hidden, has now become a very large part of my life.  And, in a strange way, it has become my ministry.  Many of you have shared that you needed someone else to be willing to say the things that had gone through your own head.

If it’s going to be my ministry, I need to be all in.  Not just hiding behind a computer screen where I can delete any horrified looks that come my way.

It’s interesting to me (though not surprising) that while God has been convicting me to be more open about my deepest darkest secret and efforts to change, I’ve also had more opportunities to be honest.

Two days last week, I volunteered at my daughter’s school.  I was asked each day (by five year olds) where I work.

I gave my standard answer, “At home.”

But both times, my daughter piped in and said, “She works at our house on our computer and she makes money blogging.”

Which totally confused the five year olds.  But I’m guessing that she’s recited that speech other times, perhaps to adults.

The reality is that no one in my real life cares if I blog.  But the fact that I keep it a secret . . . is what I have to explain. And it makes them feel like I don’t trust them enough.

Which, in my mind, is NOT the issue.  But maybe it really is.  Because the thing I have to trust them with is my heart.  My pride.  My previously-deepest-darkest secret.  My fear of rejection.

I’m thinking that just answering the question “So what are you doing now that all of your kids are in school?” with “Well, I have a blog that I work on” . . . would be a start.

Disclosure: I was provided with two tickets to attend the Dallas Women of Faith event in August by Book Sneeze and Women of Faith.