And yet, there are still days when I could totally qualify for “one of those” shows.  The ones where they take before pictures and viewers are horrified.  Then a heroic organizer comes in and establishes wonderful systems that will forever change the person’s life.

Many times, I’ve considered applying for one of those shows. I’m pretty sure I could get on one.  But other than one never-finished-terribly-wordy letter to Oprah, I never applied.

Because organizing systems don’t (do the) work. And I knew that as a get-it-in-shape-relax-and-wake-up-two-weeks-later-to-chaos kind of girl, I would live in constant fear of a follow-up show. 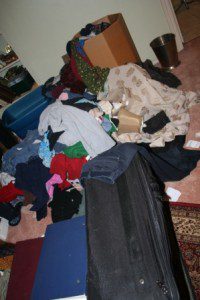 Here’s the thing.  I have two large, contained places to store out-of-season clothes.  Maybe they aren’t design-magazine-worthy, but they work.

I think I created the clothing avalanche above while pulling out summer clothes/putting away school uniforms.  It’s a blur now, so I’m not sure.  I just know that there were all types of clean clothes that aren’t needed right now strewn on my bedroom floor, and two large empty containers nearby. 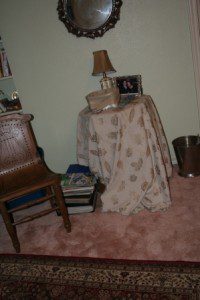 And that included stopping for a moment because I was thirsty (too thirsty to go on, I guess) and searching for my I-know-I-just-had-it cup.

I’ll be linking this up at Orgjunkie’s 52 Weeks of Organizing.  I can’t create a new organizing system every week, but I need to use the ones I have . . . . every week.