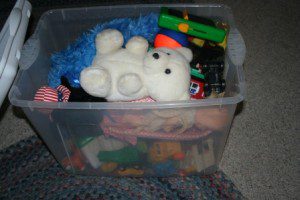 During a conversation regarding whether the Chinese umbrellas that were used for VBS decorations should be saved or included with the things passed on to another church, a strange voice said:

“Can you think of ANY specific reason that you might need them?  No? Get rid of them!”

After seeing that my mother has new deck chairs and finding the old chair pads still being stored, the  same strange voice said:

“Ummm, don’t you need to get rid of these since you don’t have the chairs anymore?”

Upon spotting a box of toys hiding under a bed at the lakehouse (that hadn’t been pulled out in several years) the strange voice once again spoke:

“Did you know there’s a box of toys in there?  Why don’t you load those up and take them by Goodwill on your way home?  Don’t even look inside.”

Let me just say . . . I find this strange voice annoying.  To a slob, unsolicited decluttering advice has the same effect as nails on a chalkboard.

But the strange voice . . . was coming out of my mouth.  All within the past three days.

It’s evidence that my brain is changing.  Perhaps clutter is no longer “just what I’m used to” but something that irritates me.

That’s good, right?  For clutter (before it gets to the overwhelming-need-a-shovel point) to get on my nerves?

I have so far to go in curing my slob-problem.  I am thankful that my brain does show signs that it is possible to change.
I just don’t ever want to be that person who thinks it’s all simple.

And don’t worry.  I’m well aware of the irony that exists if you read this post and yesterday’s post together.