Any guesses on the “O” word?

Definitely not “octopus.”  (Partly because it’s only 7 letters.)

Now let me make it clear that I am NOT saying it is my New Year’s Resolution to “Get Organized!”

In fact, I’ve decided not to make any resolutions at all.  Because even though I dream of having it all together before 2012, I know that a resolution is not what will get me there.

The word organization scares me, because in my experience it means that I get a formerly chaotic area looking really pretty, ooh and aah over it, swear to change my slobbish ways forever . . . and then fail.

And I’ve learned that waiting to change until I’m organized is pointless.  It’s the little changes, the new habits, the routines-established-and-then-figured-out that make the difference.

So, instead of making an ambiguous resolution, I’m making a decision to do a specific, tangible project that will help 2011 go more smoothly. 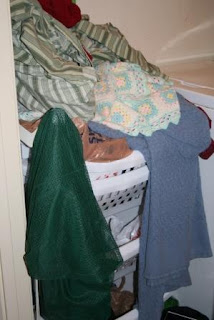 I’m going to organize my laundry room.  Hopefully in the next two weeks.

It’s the first project on my list after getting Christmas decor put completely away.

I have my laundry routine down.  Finally.  And because of that, I’ve figured out what my laundry room does and doesn’t need to have in it.

And just think, once that’s done, my goal is reached.  No looking back in November to the date when I failed to keep the life-changing resolution for the year.

Because I’m not saying I’m going to keep it perfect from now until forever, just that I’m going to set it up to best meet my needs.