Like in a play, or for a night out, or even with a particularly powerful daytime outfit.

But not really on a Wednesday morning.

And especially not today.  Today was a peasant skirt kind of day, calling for a subtle shade that would give me just a touch of color.

The kind of day for my favorite ever lipstickstain, which I thought I was out of . . . until I ran across (what I assumed was) one last tube while decluttering under my bathroom sink on Monday.

I had thought that it was gone, but knowing my slob-self, the fact that I hadn’t thrown it away didn’t surprise me at all.  The last time I wore it, I was able to get a last-little-teeny-bit out by really scraping at the sides. 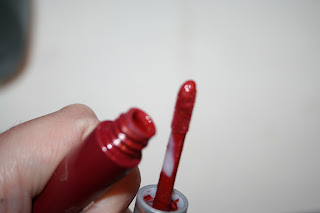 So I gave it a good dig, and lathered it on as hard as I could.

Only then did I realize that it wasn’t the shade I though it was, but rather a much darker, redder shade that I hadn’t worn much.  Therefore, it had plenty in there, making my “good dig” waaaay more profitable than I expected. 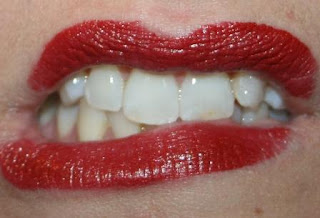 And ladies, when it calls itself a stain rather than a color, it’s not kidding.  There was no getting this stuff off.

By the time I realized what I had done, it was too late, and I had to head to Bible Study with lips that made an entrance before I did.

Of course, after I got there I realized that I could have toned it down a little with a more neutral shade on top, but when you wait until you’re already 5 minutes late to stain your lips the wrong color, you don’t have as much time for creativity/damage control.