Yesterday, I was in a bit of a mood.  A never-have-enough-time-so-what’s-the-point-of-trying-how-am-I-ever-going-to-kick-this-slob-thing mood.

It’s my reality that sometimes the mess and/or clutter overwhelms me.

But the dining room table was still piled with pictures and frames (that unfortunately didn’t match up), and so as I did my Bible Study this morning in the little bit of space I had cleared, I was looking at the piles.  On top of the piles were the cutest pictures of days gone by.  My boys hairless and slobbery.  My daughter teetering on her tiptoes.  And I knew . . . that I did not want to stick those pictures back into the box where they were a jumble of dusty memories.

And then, I decided to just see what I could do.  I had so little hope that I would accomplish much that I didn’t even take a before picture.  (I know, what kind of a slob-blogger am I?)  Here’s the box that was filled completely with pictures sticking up randomly. 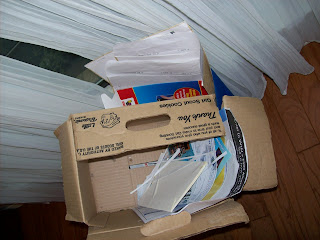 I didn’t have the frames to finish what I thought I wanted to do, but I did have a box of special notebook-album-thingys and plastic sheets in all different photo sizes ready to be filled.  I know, it’s awful that I’ve had these resources for probably ten years and haven’t ever used them.  They were given to me by my dear mother who has worked to find ways to help me compensate for my slobbish tendencies for the last 30 years or so.

Anyway, rather than berate myself for taking so long to actually use them, I’m going to be happy that my renewed mind and energy today helped me get it ALL done.

Yep, every single random picture is now in those albums. 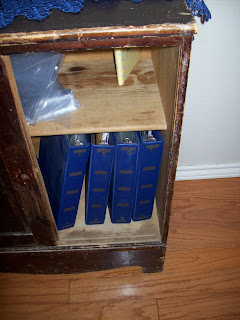 They’re not exactly pretty and a scrapbooker would probably be horrified, but they can now be viewed without sneezing.

Maybe in another 10 (or so) years, I’ll organize them and make them pretty!

And this is probably bad, but I decided to jump on my desire to get this project done, and ended up not having time to clean bathrooms before a friend came over for lunch.  But my joy of having a major project done that has been hanging over my totally-unaware-head for so long outweighs any guilt I feel over that.

And did you see?  I even found a completely unused storage space where they fit perfectly!!!

Yesterday I was hopeless because my plans to accomplish huge things were not going to work out.  Today I have hope because I’ve decided to be okay with my ability to accomplish a few small things.