This Imminent Arrival of the Bug Man thing is about make me crazy.

Here I’ve been going along, proud of myself for mopping on Thursdays, being able to have people over every single Sunday night, not letting the dishes get out of control, and being able to name with certainty the date when I last cleaned the toilets.

And yet, the other parts of my home, which don’t necessarily have to be seen by guests, but where we LIVE, still have soooooo far to go.

I dream of the day when I’ll finally have this slob-thing conquered and can have the bug-man show up the next day if needed.  Instead, I’m left sweating, suffering and sneezing for a week just to get the house to the point where I can say, “Sorry, I really haven’t had the time to clean.”

So, even though I’ve had multiple profound thoughts while grunting and dusting and vacuuming this morning, I’m just going to show a few before and after pictures before I go take a Benedryl and go into a stupor for the rest of the day.  I’m supposed to sing in church on Sunday, so I can’t risk these already-bad-seasonal-allergies-made-worse-by-cleaning-corners-that-have-been-ignored-for-months-sometimes-years turning into bronchitis and making me lose my voice. 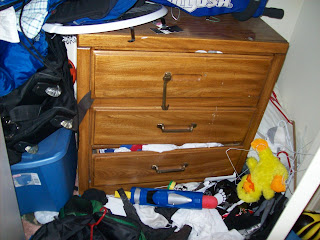 Here’s my boys’ closet on the morning of the day of Chuck the Chicken Snake’s Big Adventure. 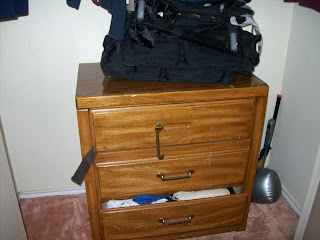 Here it is after about an hour.  Cleaning this closet, I found six EXTRA backpacks.

That’s six in addition to the ones the boys take to school, the one my daughter uses regularly, and three more for weekend trips.

You can do the math.  I don’t want to know how many that actually is. 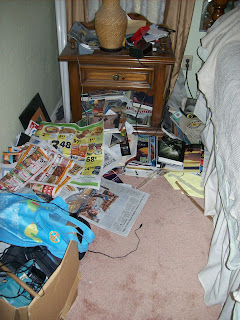 And here’s what hubby’s side of the bed looked like this morning.  Now, if you happen to be new here, please don’t think bad thoughts about him.  Compared to my side of the bed . . . . this is nothing. 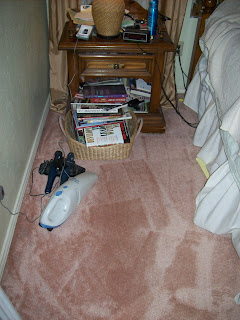 Here it is after an hour.  This shouldn’t really have taken an hour, but the non-stop-sneezing was slowing me down.

The main issue here was the newspapers.  In an effort to be organized (hardee-har-har-har), I put the basket (that is in both pictures but can only be seen in the second one) there as a place to store newspapers until our town’s once-monthly recycling pick-up day.

Even though we generally only get the Sunday paper (a double-copy), the small basket fills up about half-way through the month and then spills out into chaos for the next two weeks.

After our big garage sale last spring, I bought two 45 gallon trashcans to put in the garage.  My idea was that one would be for recycling, and one would be for overflow trash.  We’ve pretty much only been using one for recycling plastics, and the other has been empty.  So, I decided to use the empty one for newspapers, and put hubby’s books in the basket.  Since I have no room to talk, I’m not going to make any “contain”-er decisions about his books, but may ask sweetly if he would mind going through the books and weeding out the ones he really doesn’t need.

And . . . I shoved some of the other books under the bed.

Far from perfect, and far from my dream of what I want our home to be, but so much better . . . and bug-man-friendly.