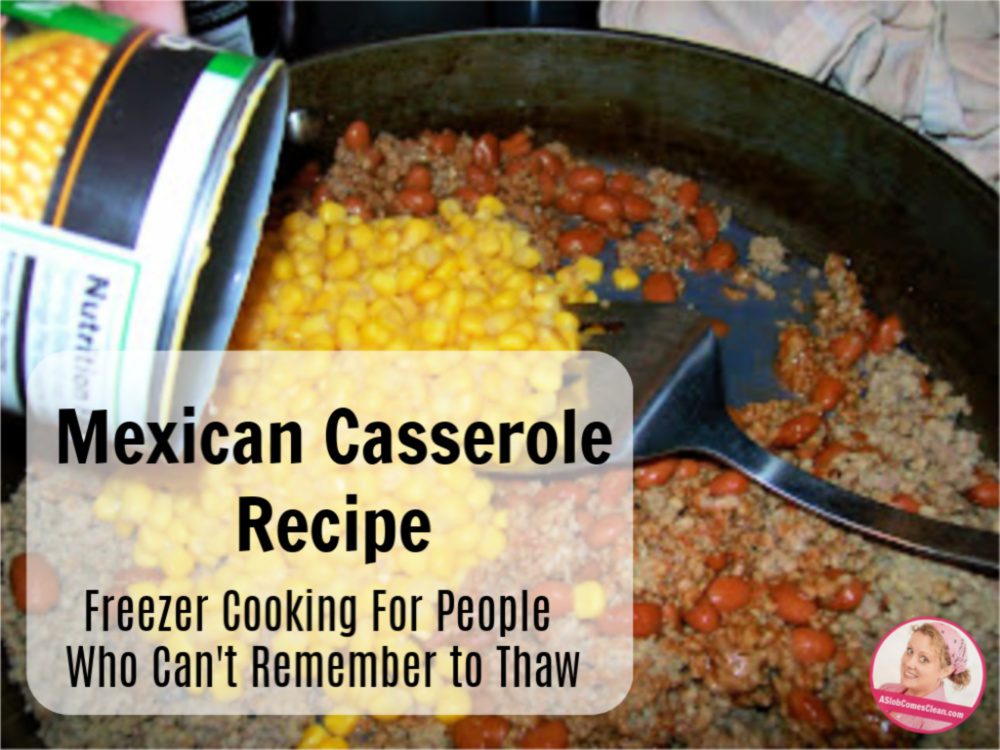 Before my second child was born (7 years ago yesterday), I shared with my mother-in-law that I was trying to freeze quite a few meals to make life easier after the baby arrived.

Later, a mutual friend asked me what kinds of casseroles I had frozen.

I had no idea what this person was talking about. After a very confusing conversation, I realized that my MIL had assumed that when I said I was freezing meals, I meant casseroles.

I also used to think that if you were going to freeze a meal it had to be a casserole. Only after hearing a speaker at a mom’s group did I start to re-think what could be frozen.

I’m not anti-casserole. In fact, I’m about to share my Mexican casserole recipe below. There’s just one teeny-tiny problem I have with frozen casseroles.

You have to thaw them.

A whole DAY ahead? Really? My brain just doesn’t work that way. Even if I have a menu planned, the chances of me remembering to check that menu before 3 p.m. for that night’s meal . . . are pretty slim. And if the planned meal is a frozen brick 3 hours before dinnertime, I’m stuck scrambling.

I’ve tried to defrost them in the microwave, but I’ve never been able to get the middle thawed without turning the outside into rubber. And because the directions always say “Just pull out of the freezer and put it in the fridge the night before to defrost” I never know if-you-can/how-you-could cook it long enough from frozen to make it come out right.

While I’m working hard to be more organized and do better at stuff like this . . . there are areas where I have to accept how my brain functions. Better to do freezer cooking in a way that works for me than to fill my freezer with things that will never be eaten.

As I shared in my freezer cooking plan last weekend, I generally pre-cook and freeze basic ingredients. Chicken, ground beef, beans, rice, etc. can all be cooked ahead and frozen, allowing me to make home-cooked meals in an instant.

As an example, here’s my recipe for Mexican casserole. I had this for the first time at a potluck dinner at my church in Thailand, and it tasted just like home to me. I often make it for potlucks, and people always ask for the recipe.

Here’s how I made it last night. 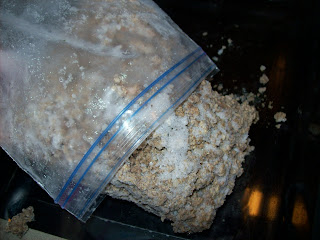 I dumped a frozen hunk of pre-cooked ground beef into a glass casserole dish, and put it in the microwave for a minute and thirty seconds at 20% power. My goal was not to re-cook it, or even to fully defrost it. I just wanted to be able to break it apart into smaller chunks. 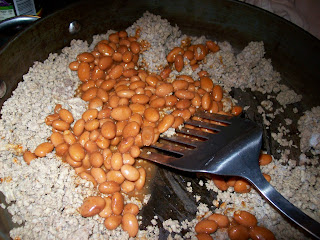 I then dumped it in a large skillet and added a can of Ranch Style Beans. If you don’t have those where you live, you can use Chili Beans. I had planned to use the beans I cooked yesterday, but since my Crock Pot died and I had to switch them over to my other one, they weren’t quite done. If your beans don’t have enough flavor, you can add taco seasoning at this point. I added a dash of each of the ingredients in the home-made taco seasoning I like to use. 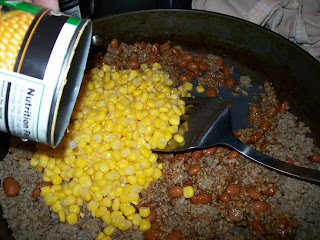 I then added a drained can of corn. 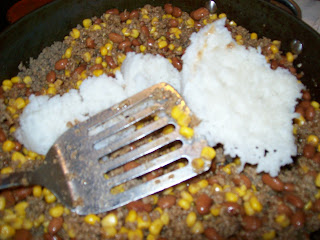 Yesterday, my rice wasn’t frozen yet, but when it is, I take about a two cup chunk and put it in the glass casserole dish that I used to defrost the beef. I put it in the microwave for about 2 minutes, on 40% power, until it breaks apart easily.

Break up the rice and mix it all together until it’s all warmed through. 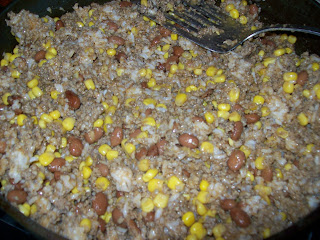 You can eat this as a skillet meal, or put it back in the casserole dish, top with cheese, and put it in a 350 degree oven long enough to melt the cheese. 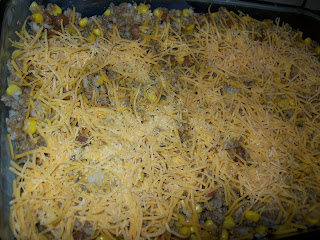 I went ahead and made this last night (so I could take the pictures), but we’re actually eating it tonight. Somehow, the birthday boy didn’t want Mexican Casserole for his special dinner.

We had corn dogs and macaroni and cheese.

This is just one example of an ultra-fast meal you can make with frozen pre-cooked basic ingredients. Chances are, many of the meals you already make could be thrown together faster if some of the ingredients were pre-cooked.

Just a note – in case you’re like me and make this recipe “from memory.” Don’t forget the rice. It’s an important ingredient.

Especially don’t forget it if you’re taking this meal to a family with a sick mama.

If you are on your way to take it to the family . . . and something just doesn’t seem right about it, you probably forgot the rice. 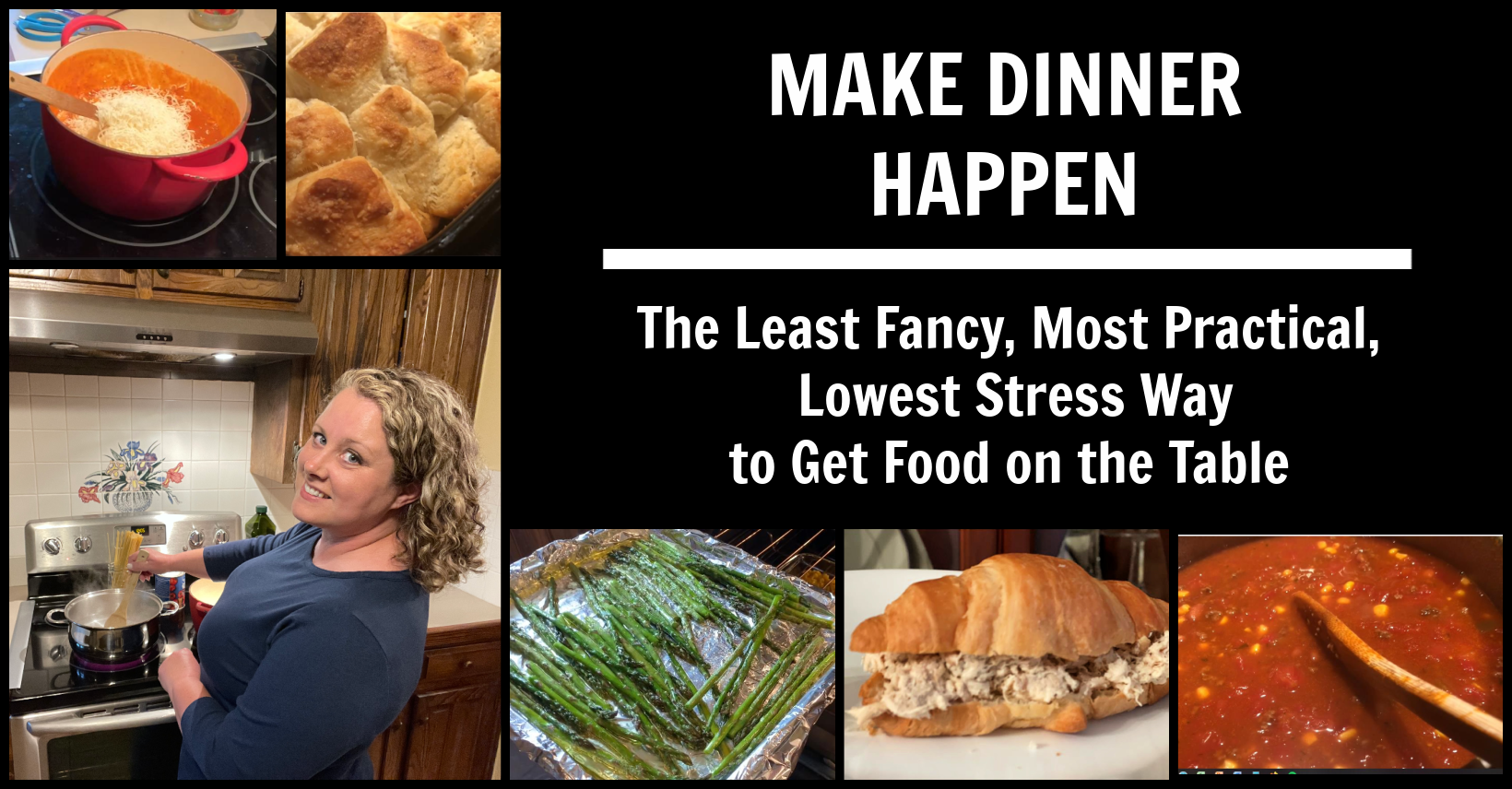 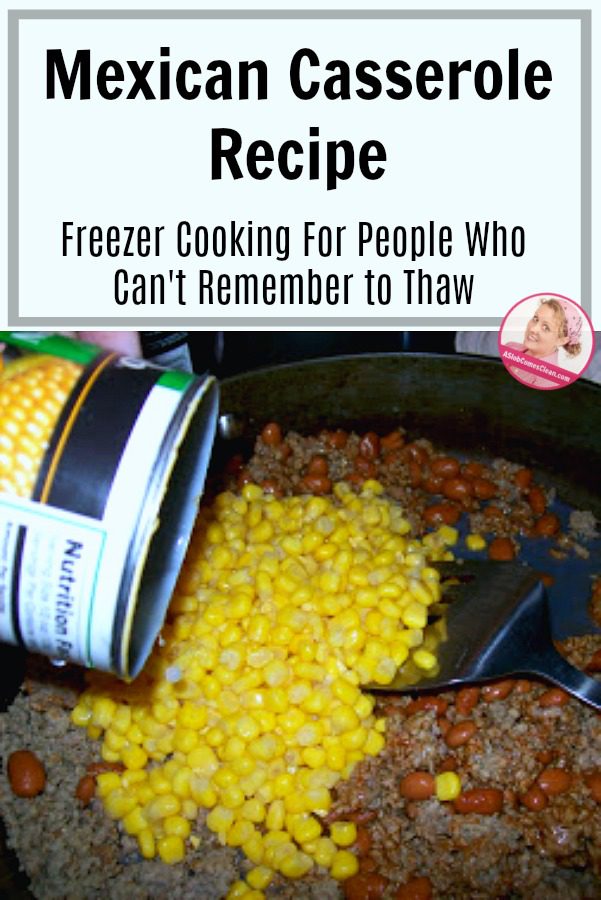