Yesterday was Wednesday, which meant I didn’t have a big cleaning task to do. Normally, Wednesday is my run-around day, but since most things don’t start up until after Labor Day, I was freeee!I decided to spend two hours decluttering.

I started with eliminating the pile at the end of the bed. The pile that was seriously making me wonder if I had grown taller over the summer, since my feet didn’t have as much room they used to. 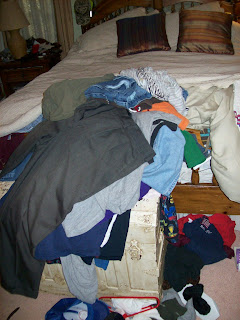 See how the bed is made? In the past, I would have questioned the point of making the bed when the rest of the room looked like it did. But remembering the advice I read years ago in How Not to Be a Messie

, that if you don’t make your bed, you’re not serious about changing your messie ways, I’ve been doing it. And I have to say that starting your day with that task really does set the tone.

ANYway, after about 20 minutes, the end of the bed looked like this: 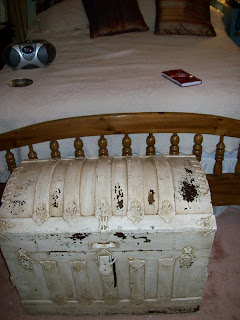 The CD player was there so I could practice a song, and the book was there so my daughter could write down where she put everything that I asked her to take to another room.

Not that I asked her to.

Not that she knows how to spell.

My side of the bed. 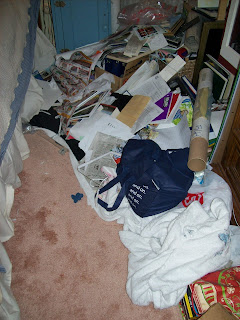 Now for my lame defense. This is pretty much the last place in the house that looks this horrendous. Other rooms still have clutter spots, but not toxic dumping grounds.
And that’s what this was . . . a dumping ground.

Basically, in the past year of decluttering like a crazy-woman, I got rid of tons of stuff. I found homes for tons of stuff. But there were still things that baffled me. Things I knew shouldn’t go in the trash, like recipes or photos or books I have yet to read. So all of those things congregated in this spot. And of course, they were soon joined by their trashy friends.

Over the past year, I’ve learned quite a bit about the best ways for me to declutter. There are several factors that determine which strategy I use.
How big is the pile?
How much time do I have to devote to this pile?
Which is more important? Speed . . . or thoroughness. (Translated: Did MIL just exit the interstate, giving me 12 minutes before the doorbell rings, or is this a hidden spot that needs to be decluttered because it’s the right thing to do?)
When time was short, such as when I gave myself 5 minute intervals to see how much I could accomplish in the laundry room, I used the “go ahead principle.”  With the laundry room, I knew that total-time-spent was the most important factor, and I dealt with each item as I came across it, so I wouldn’t end up with a pile of stuff to distribute throughout the house when I thought I was done.
When dealing with an entire room that was at full-disaster-status, like the office or the master bedroom, I used the little-by-little approach. Focus on a small area for a short amount of time, and eventually the whole room will look better.
But occasionally, like yesterday, I have a chunk of time and the ability to choose a big project to tackle.

This side-of-the-bed project required thoroughness, and I had a 2 hour chunk of time to devote to it. I decided to trudge along for an hour and a half, sorting the masses of stuff into piles as I went. I created stacks of books, magazines, photos, recipes, school-supplies, etc. on the bed. I kept working my way through the pile, continuing to sort, until I had 30 minutes left. At that point, I put the piles in their new homes. Some are in permanent homes, but some are in stacks on the corner bookshelf, waiting for the rest of this area to be unearthed, so I can get to their real homes. This only took about 10 minutes, and so for the last 20 minutes, I switched to the “go ahead” method. Meaning, any unearthed item was immediately taken to its new home, even if that meant walking to the other side of the house. I didn’t want to be caught with the “Time’s Up!” excuse, and still have a pile of stuff on the bed.

(I’ve been known, in the past, to have that happen . . . and just put the stacks back in the same spot where they started, only to have them gradually morph back into a random pile of clutter.)
Here’s the spot now: 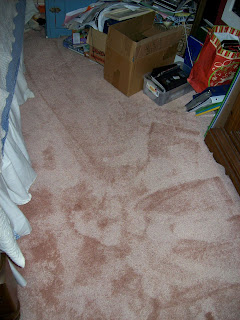 It’s not my dream “after” picture, but it’s progress!  And it feels so great to be able to walk freely on that side of the bed.  You know what it’s like when you get out of the car after a long drive and your arms and legs feel fantastic because they can finally move around?  I never realize how much crazy maneuvering I have to do to step around clutter until it’s gone.