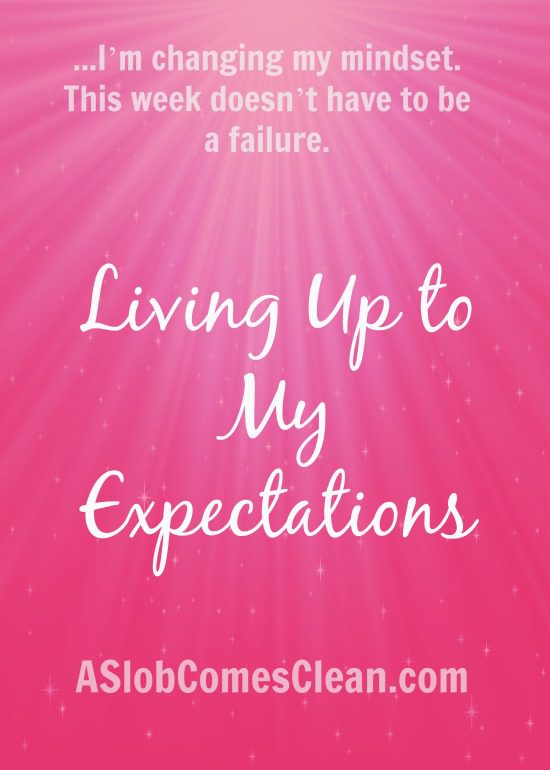 I’ve been saying for weeks that this week, VBS week, was going to be my undoing.  I expected it to be crazy, myself to make excuses, and order to be unattainable.

This is the big struggle I face between being realistic about how I am, and deciding to stop the excuses so I can change the things I need to change.

I’ve been trying to be realistic.  Last year, when I attempted to go from slob to super-organized-mama on the first day of summer, VBS stopped me in my tracks.  I had no momentum. I had no habits. When VBS week arrived, nothing I was doing in the Summer of Big Change felt at all natural.

I have been a bit whiny lately, and I apologize.  I expected this week to throw me for a loop, and so I let it.  It didn’t help that I had a weekend of back-sliding just prior to this week, but my expectations of failure were allowing the back-sliding to continue longer than it should have.

Yesterday, the thought crossed my mind that “I can’t actually do this.  I can’t actually change for good.  I’ll eventually go back to the way I’ve always been.”  The occurrence of this thought really upset me.  In the close-to-a-year that I’ve had this blog, I don’t think that thought has entered my head.  By being accountable, I’ve seen progress, and that progress has given me hope.  Real changes have been made, and real habits have been formed.

That thought used to enter my head often.  Attempts to get my home in order always failed, and I didn’t believe that I would ever change.  So why, now that I’ve had real success for an extended period of time, did that thought reoccur?

I think it is because I changed my perspective this week.  I allowed myself to expect failure, and somehow thought I was doing myself a favor by being realistic.

I wasn’t doing myself any favors.

So, I’m changing my mindset.  This week doesn’t have to be a failure.  This morning, I emptied the dishwasher, cleaned the kitchen, swept, and felt immensely better.  And all of that was done in plenty of time before we needed to leave.  Instead of dismissing a hard week as one where I can’t get anything done in the house, I need to view it as hard because I have to do fill-in-the-blank in addition to all of the normal housekeeping stuff.  Does that make sense?

I’m not saying that I’m going to get the showers scrubbed or the shelves dusted.   Pre-blog, those things went through months of neglect at a time.  But the non-negotiables are still non-negotiables.  Hence their name.

I’m calling myself on this big lame excuse.  While I still may fail, it won’t be because I expected to fail.