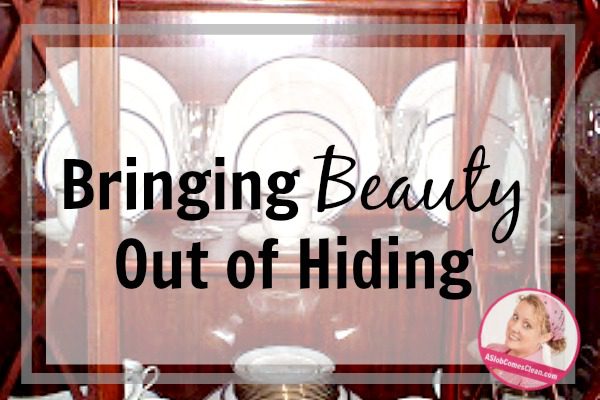 I started doing some random decluttering this morning, and ended up very happy with big results.

I began by moving some glass goblets that I had purchased at the Dollar Tree a while back because I “didn’t have any nice glasses to use with my formal china.” I learned this three Thanksgivings ago when we used our formal china for the first and only time in our 10 year marriage. I was planning to move the Dollar Tree glasses to the china cabinet (seen above) in the dining room.

I took them off of a shelf in the kitchen and put them in the dishwasher. Since this freed up that shelf, I looked in the cabinet below to see if there was something hiding in that mass of “stuff” that could be displayed in their place. I found . . . . crystal glasses that we received for our wedding. Beautiful, expensive and very sparkly. Just a teensy bit nicer than the ones from the Dollar Tree. And hidden in boxes for 10 years. So I decided to put THOSE in the china cabinet instead. I then found another box of them, as well as several EMPTY boxes. Grrr. The empty boxes were for crystal candlesticks, which I received TONS of at our wedding. But I’ve had the candlesticks out and displayed for several years now. As a group of varying sizes, I really like them.

So why exactly was I keeping/storing/ignoring those boxes?

Removing them left all of this space:

Well now I was motivated.

I’ve been meaning to/planning to purge the lower cabinets in the kitchen. Forget getting up early to start breakfast for the family if I plan to use ANY pots or pans. Nobody could sleep through the racket that it makes when I have to dig around and pull something out.

I knew that there were quite a few things in there that I needed to get rid of, but I really had no idea how much. 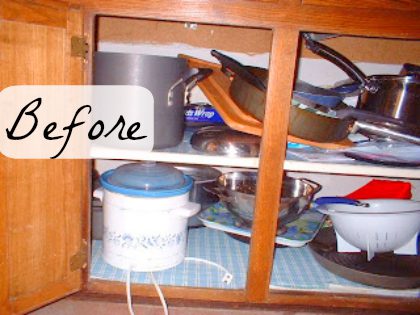 I pulled EVERYTHING out and made enough piles to fill up the entire kitchen floor.

A trash pile, including coupons that expired in 2007, assembly instructions for a toy we sold in a garage sale in 2008, and a disposable pan that should have been “disposed” a long time ago.

And then this pile above. My favorite pile. I call it the “Why the blankety-blank do I even have this stuff?” pile. Don’t worry, the words in my mind were actually “blankety-blank.”

And here are the after pictures: 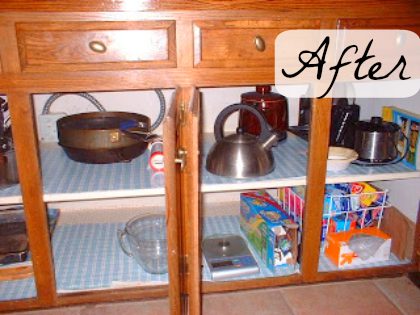 Yes, I did put the tea kettle and the duck-tray back. When I saw how much room I had, I decided to keep them. Just a few days ago I was wishingI had a tea kettle . . . .