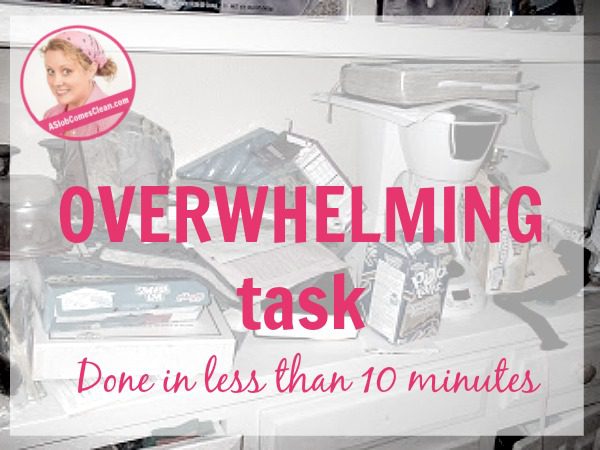 My first Tackle it Tuesday! This is right up my alley. Motivation to do the things that don’t get done otherwise.

It is my goal for the week to get three clutter areas cleared. So then there will only be sixty or seventy more to go. Ha ha ha.

I’m not kidding. Look at my blog name.

I have the prettiest built-in-cabinet/hutch-type-thing in my breakfast nook. Its only fault is that it is a huge junk collector. (See how I made it sound like it is the inanimate object’s fault, rather than mine – I’m really good at that.)

Less than ten minutes from start to finish.

Yes, I know there’s still a pile on it, but that’s hubby’s Bible Study stuff that he does every morning, and moving it would stress him. As I get better at this, I’m going to try to find another place for it. For now, I’m satisfied with it being there because it is something that actually gets used, not just piled. I thought about not including it in the pic, but my goal for this blog is to be COMPLETELY honest.

Some of the stuff was trash, even things that are really cute and the kids might do someday.

And some things needed to be relocated, including the coffeemaker whose carafe we can’t find a replacement for (I guess it should actually be trash):

And last year’s leftover school supplies, some of which we could have used again this year, grrr. These go in the craft closet which is an entire two steps to the right from where they had been thrown.

And everything, yes EVERYTHING else went into the cabinet that was right next to this counter. I put it all away without even moving my feet.

And only one thing to make me scream. A locust shell/skin/whatever that my son had been keeping in the toy cage.

Check out other Tackle it Tuesday tasks here