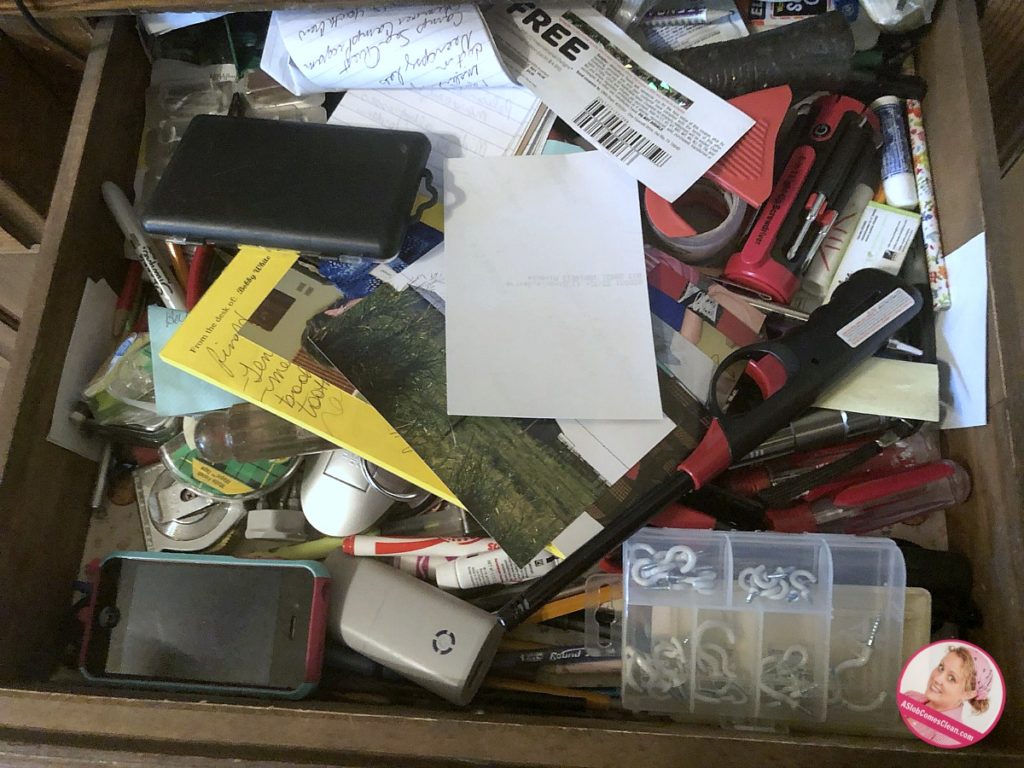 I decluttered my junk drawer.

I had done some minor re-decluttering of this drawer over the years, but lately I’d been avoiding it. There were a few things I would expect to find when I opened it, but mostly I just let it nag at me as something I had to deal with someday.

But for the Tackle Your Scariest Space Challenge, I thought this drawer was perfect.

This space was scary, and it was scary because it was random.

I started by pulling out trash. Focusing on trash (the easiest of the easy stuff), gets me going. 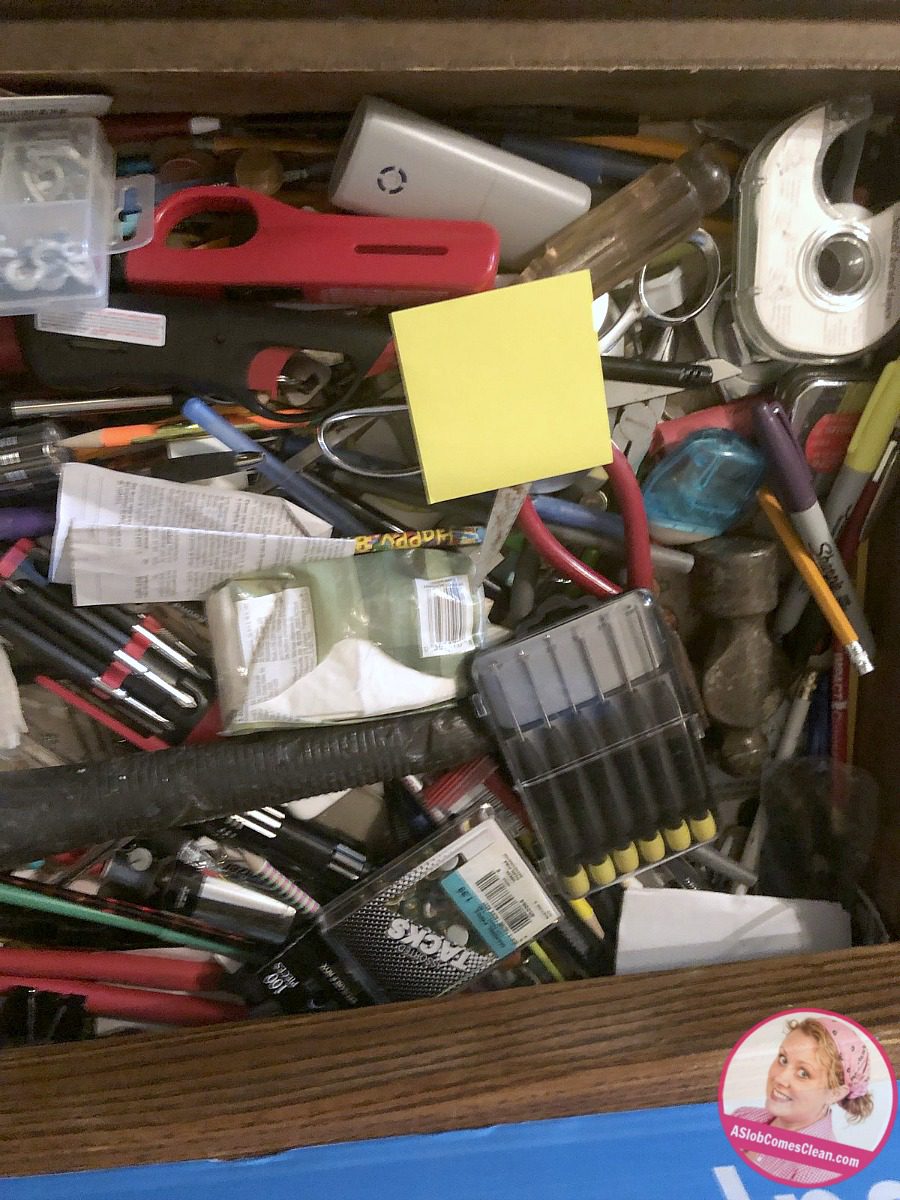 And pulling out trash makes it ever so slightly better. Slightly. But better.

Trash includes things like a kid’s meal token that we’ve obviously had for a while.

My youngest child is 13. 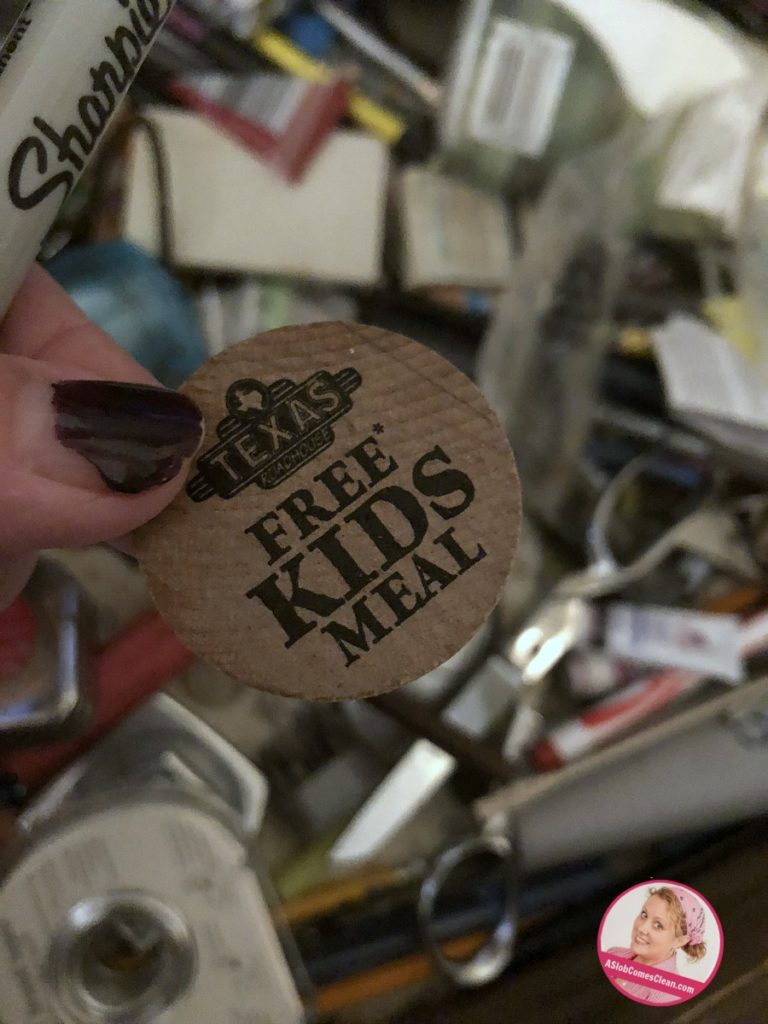 I then kept removing Easy Stuff. Stuff that has an established home somewhere in the house.

Little by little, it got a little better.

And then, I had to stop.

Life happened. I was only a week out from my hysterectomy, and my energy evaporated at the end of an already long day.

But because I’d been following my game-changing rule to “take it there now” instead of making piles or filling a Keep Box to empty later, I could stop. Without being any worse off.

And with the space being better than it was before.

Yay for progress and only progress! 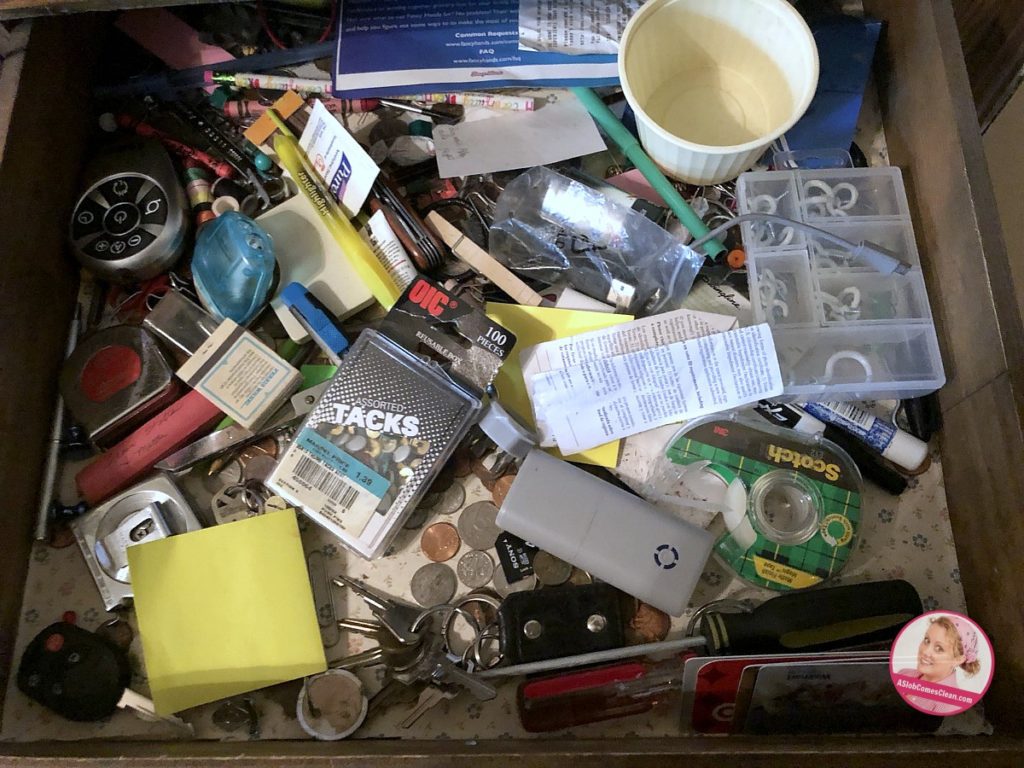 Seriously, y’all. Even if I never got back to this project, this drawer was better than it was before, and much more usable.

But I did get back to it the next day when I had energy again. I kept working through the drawer, item by item.

That’s how the “take it there now” thing works. That literal 47 seconds of walking and hooking (all three photos below have “3:11” as their time stamp on my phone) meant that whatever happened, my house was better.

The shower curtain was saggy-spot-free.

And my kitchen didn’t have a pile of stuff waiting to be put away later. 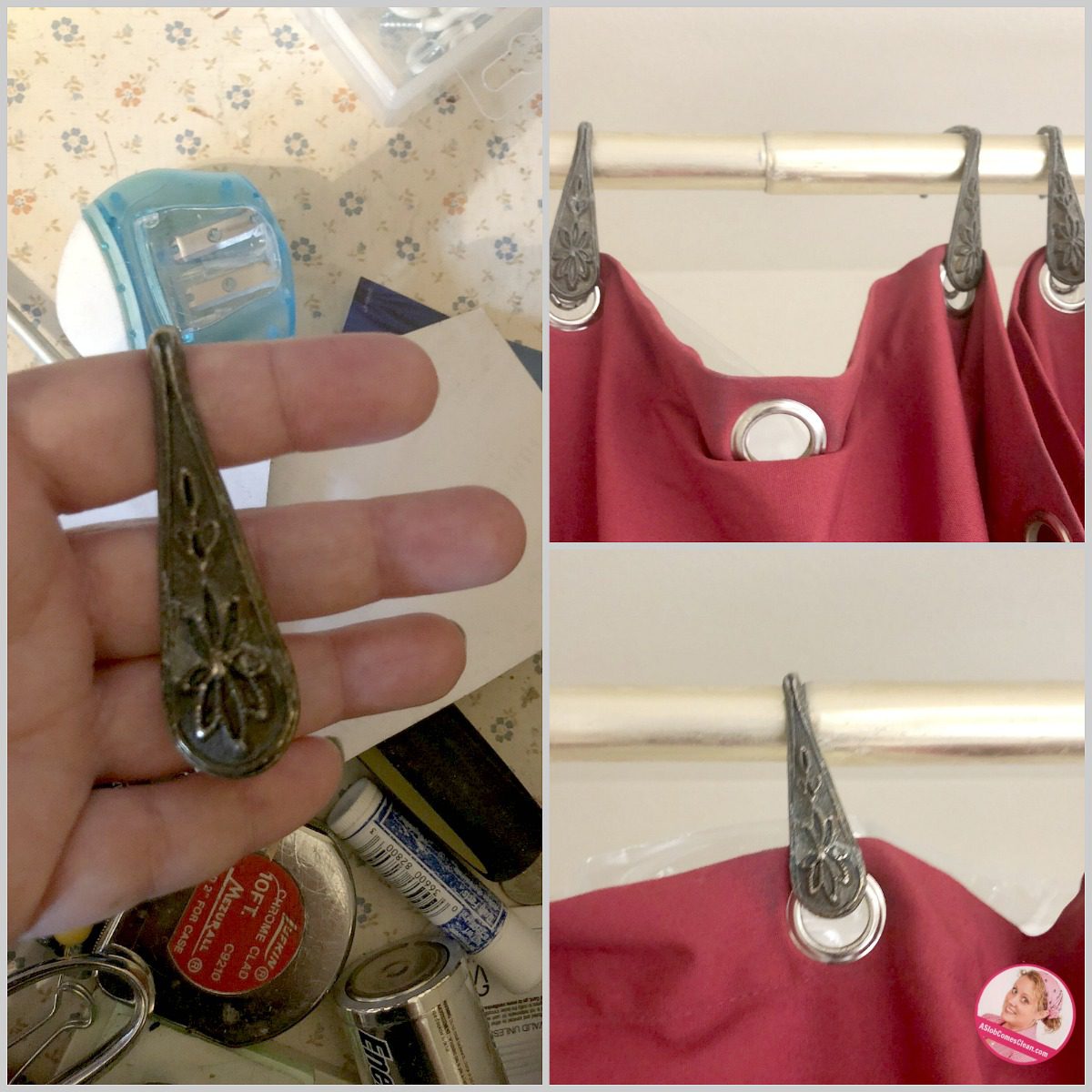 And eventually, I ended up with a decluttered drawer. No fancy organizing systems, but it was decluttered.

I could see everything in it, close it properly without a single grunt, and easily grab anything I needed. 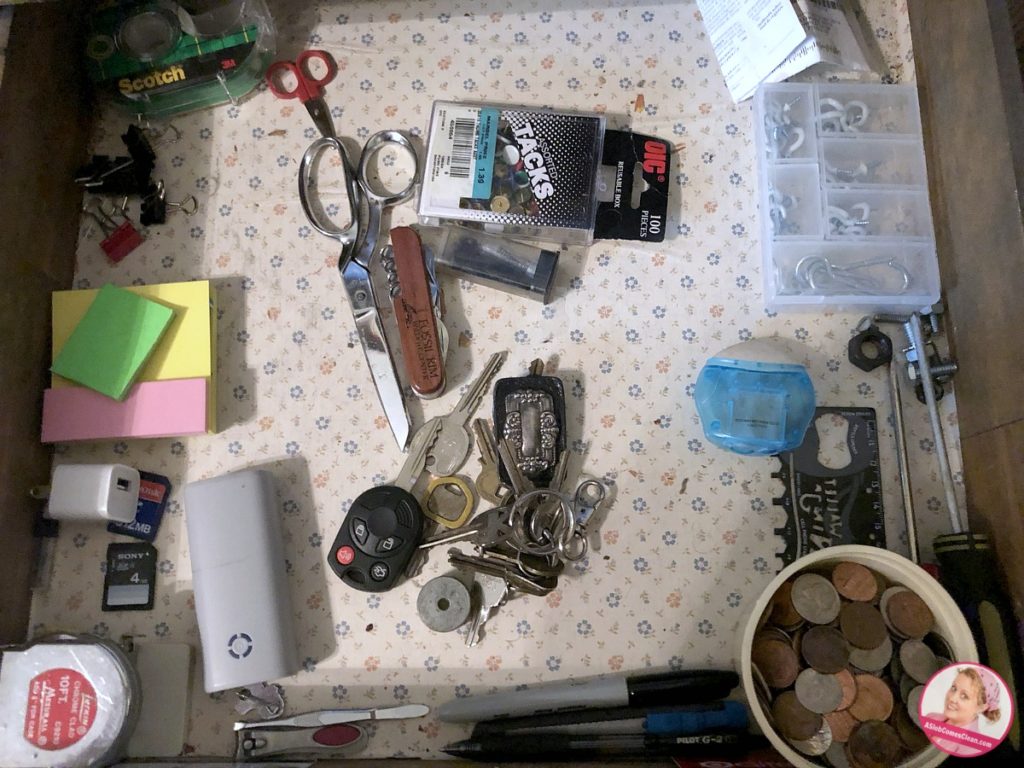 Are you tackling a scary space?? I have a secret, special video in which I talk people through their scary space. You can watch it if you sign up for my newsletter! Go here to sign up and you’ll get a link to the video in your first email that comes immediately. 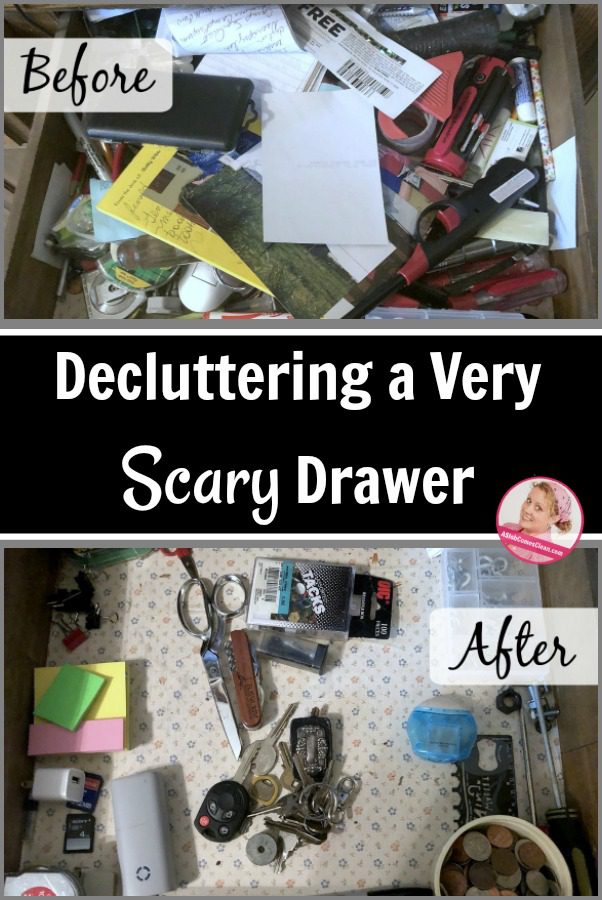