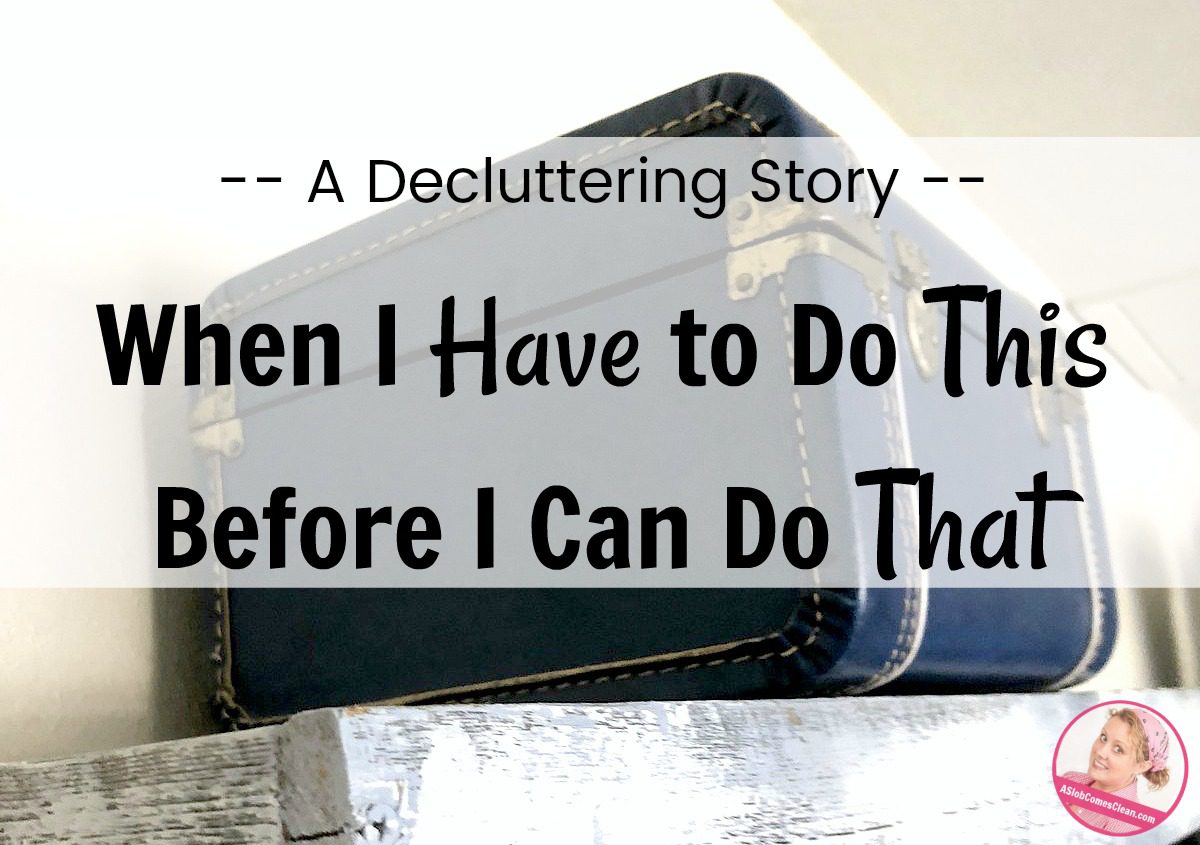 The “I have to do this before I can do that” decluttering frustration is real.

This frustration used to make me question the point of even trying to declutter. Trying to clean up my house felt so complicated.

Today, I’m sharing what the decluttering process sometimes looks like in real life. How do I keep making progress (and never a bigger mess)? What do I do when I take something to the place where I’d look for it first and that place is a mess?

This isn’t a teaching post. It’s a real life example post. Welcome to my Slob Lab where you can see how the strategies actually play out.

There once was a cluttered garage. See this post for the explanation/excuse.

The most annoying thing in that cluttered garage was a bookshelf. It wasn’t a huge bookshelf, but it made a tight path even tighter.

I needed to move that shelf back into the house, but I had to clear it first. Random Stuff had started living on the bookshelf over its time spent in the garage. (I mean, it’s a shelf . . . ) 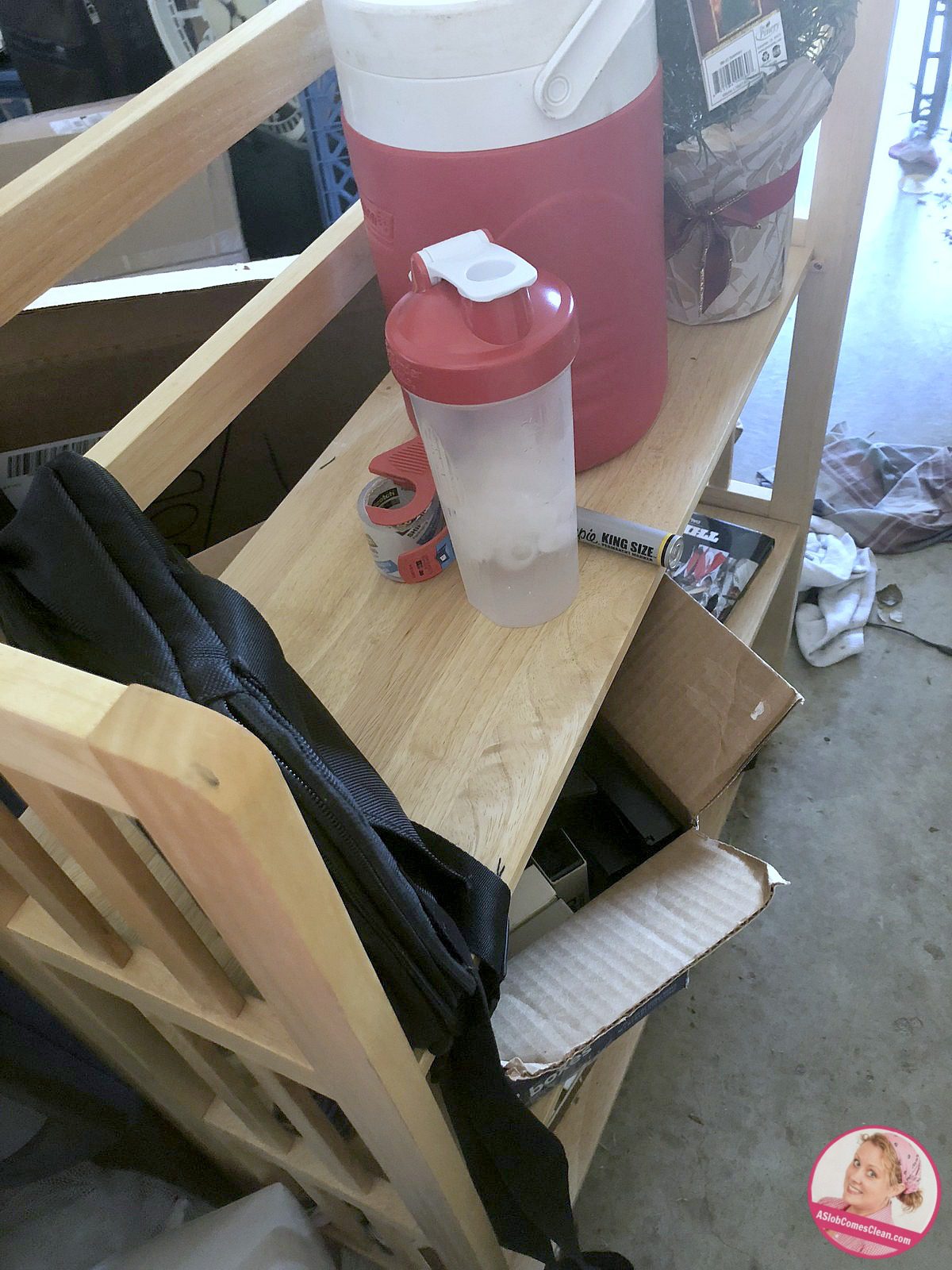 So I started the decluttering process.

Trash. Easy stuff (anything that already has an established home elsewhere). The two decluttering questions.

I needed to remove this lovely miniature Christmas tree to which I happen to be allergic. I’d shoved it out in the garage to keep it from polluting my air. I was sure someone else would love to have this rosemary bush, so I texted my neighbor right then to ask if she wanted it. 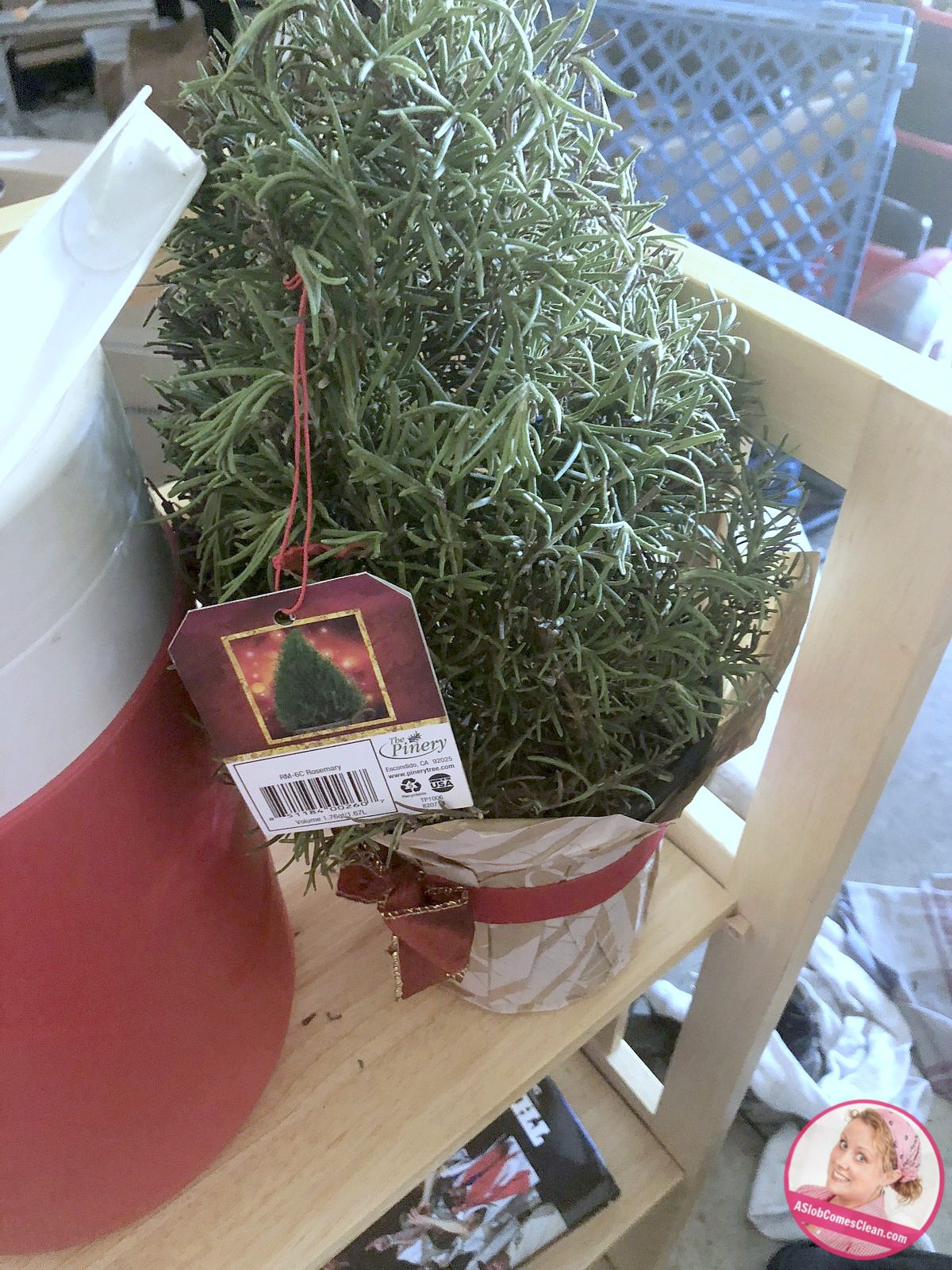 I just needed to put the plant somewhere safe while I waited to hear back from my neighbor. I looked up and saw the perfect temporary spot for the poison-to-me-tree, but . . . in that spot was something else. 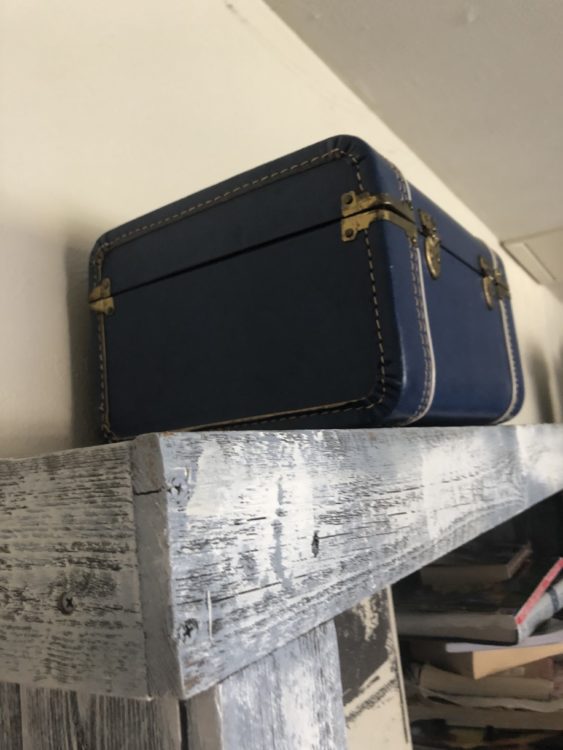 Something else that was easy. I really thought about putting off the Something Else for its own decluttering project. Technically, I could just shove it to the side.

But I was already in Easy Stuff Mode. It would be equally easy to take the blue train case to its easy spot on the newly-painted-white bookshelf in my living room. 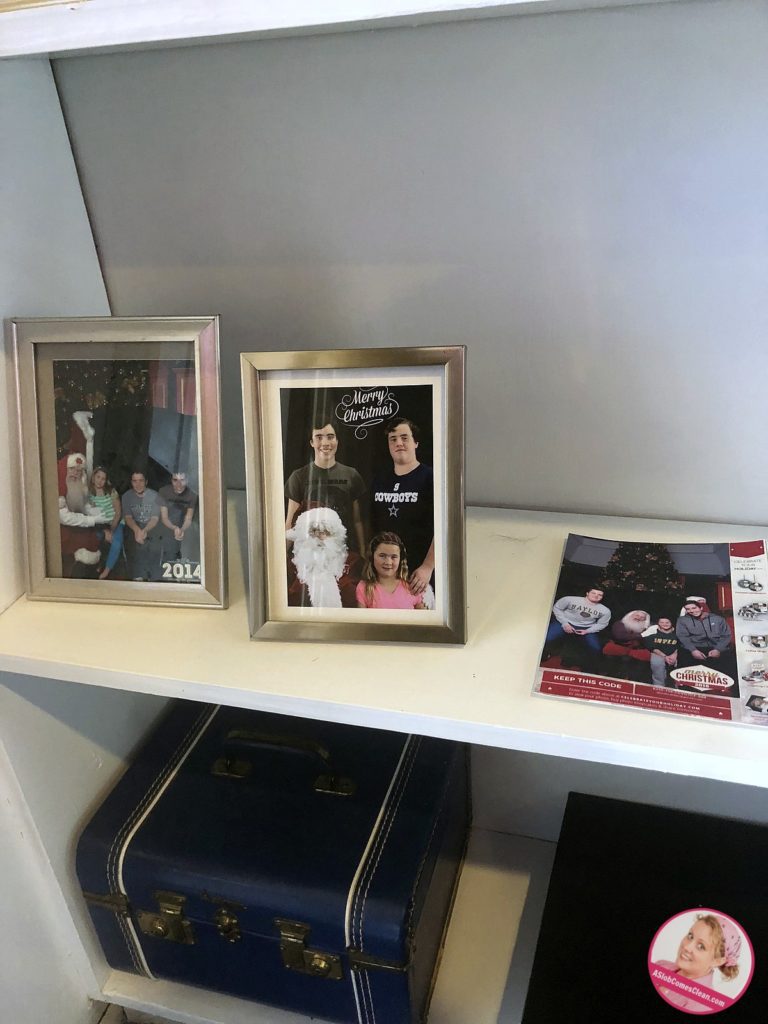 With my free hand and in the same motion, I put the rosemary tree-thingy in its new/temporary home.

I came back to the shelf and moved the easy red water carrier to the first place where we’d look for it, by the fishing stuff.

I came back to the bookshelf, again, and looked inside a box. I found the video tapes I chose to keep when I got rid of a storage chest. (When our flooring was replaced, I decided that storage chest didn’t deserve to go back into my house.) 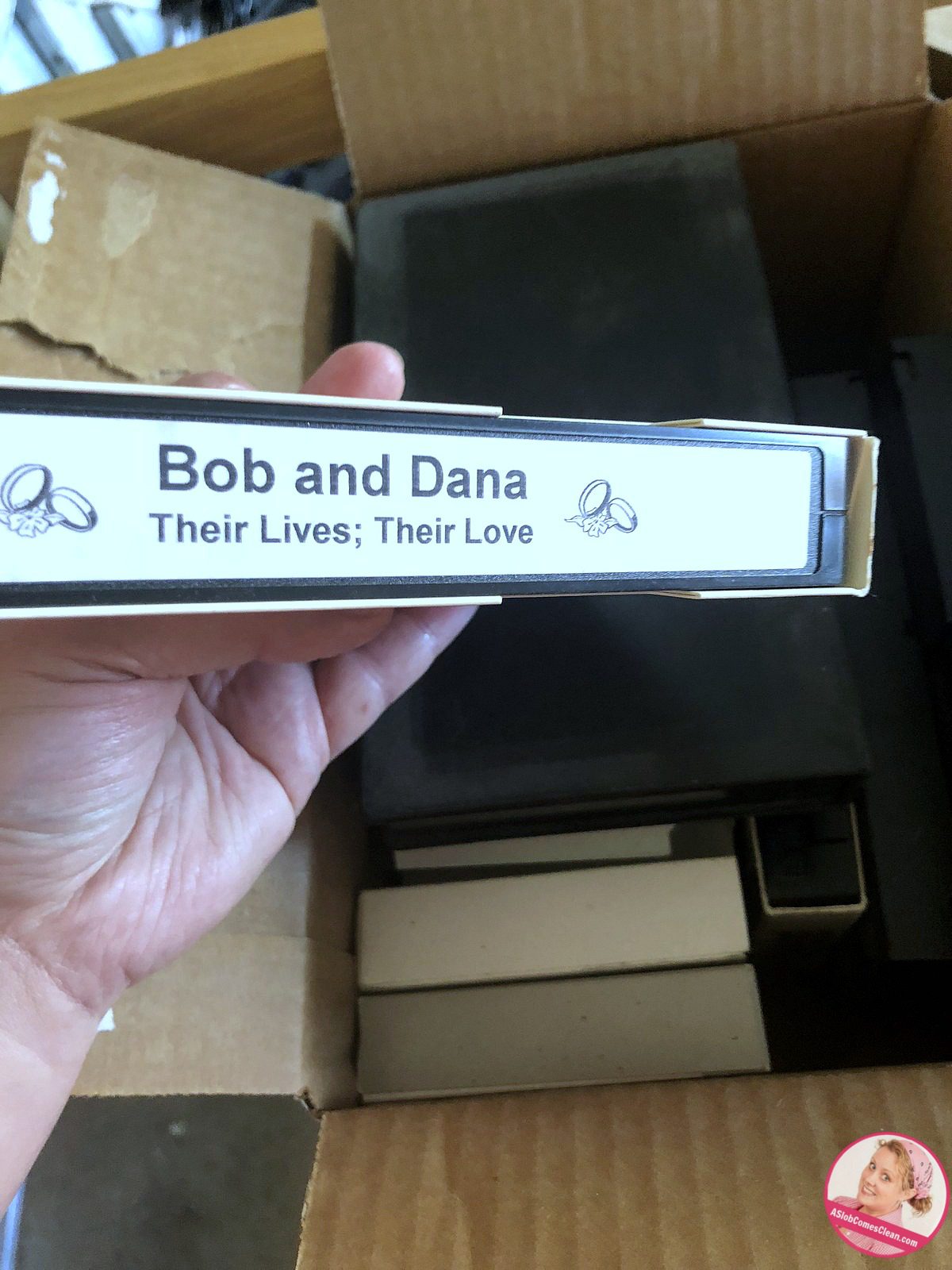 I took the VHS tapes to the first place where I’d look for them, in our TV stand. But other things were scattered through that cabinet, taking up the room I needed for the box of videos.

Because my goal was to put the box of video tapes into the space where I’d look for them first and get back to my decluttering project, I needed to make some space for the box.

I thought of a red crate I’d recently stuck in a not-yet-donated Donate Box.

I unscattered the scattered stuff into that red crate and made room for the box. 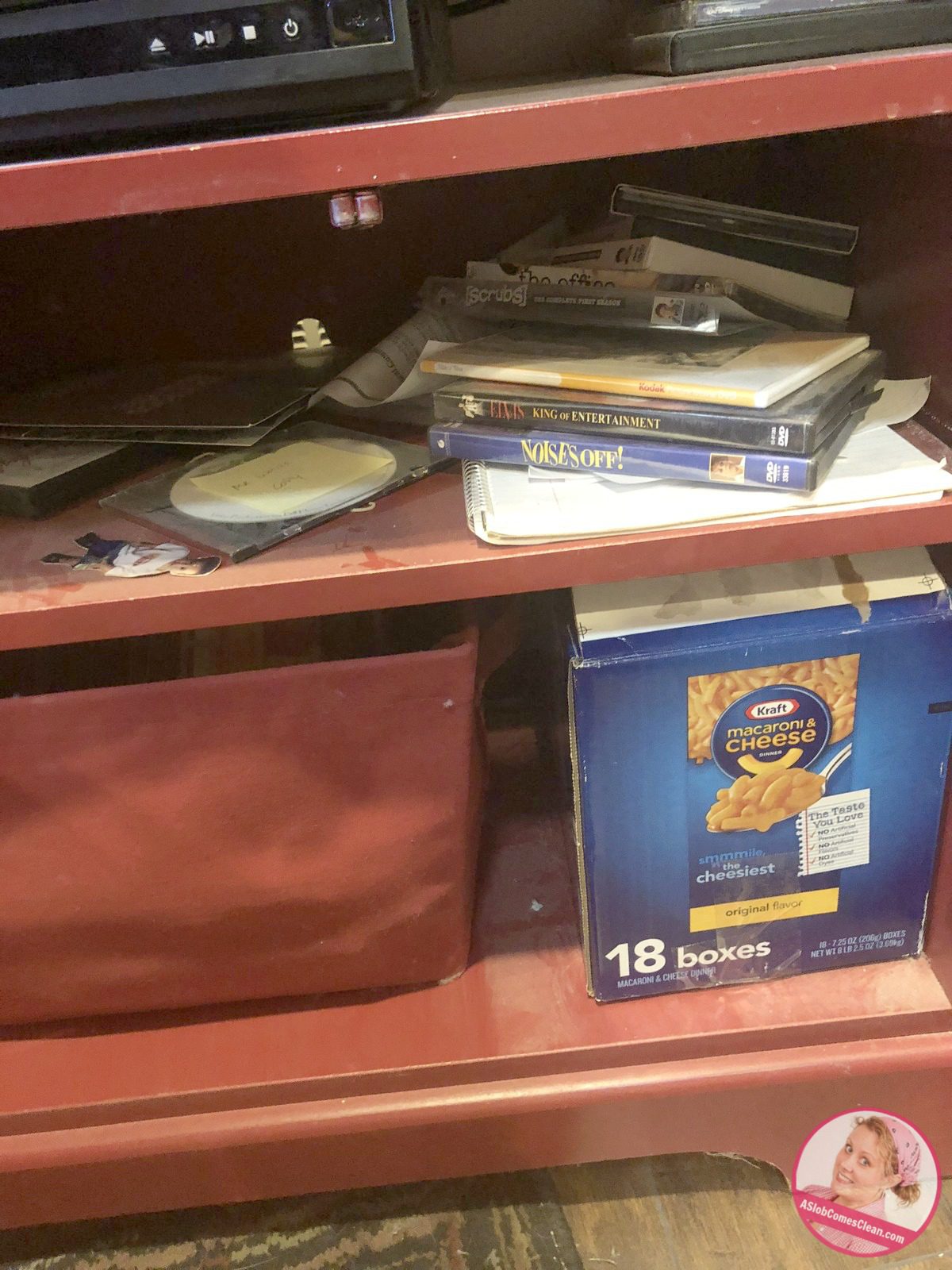 Far from perfect, but you know what? 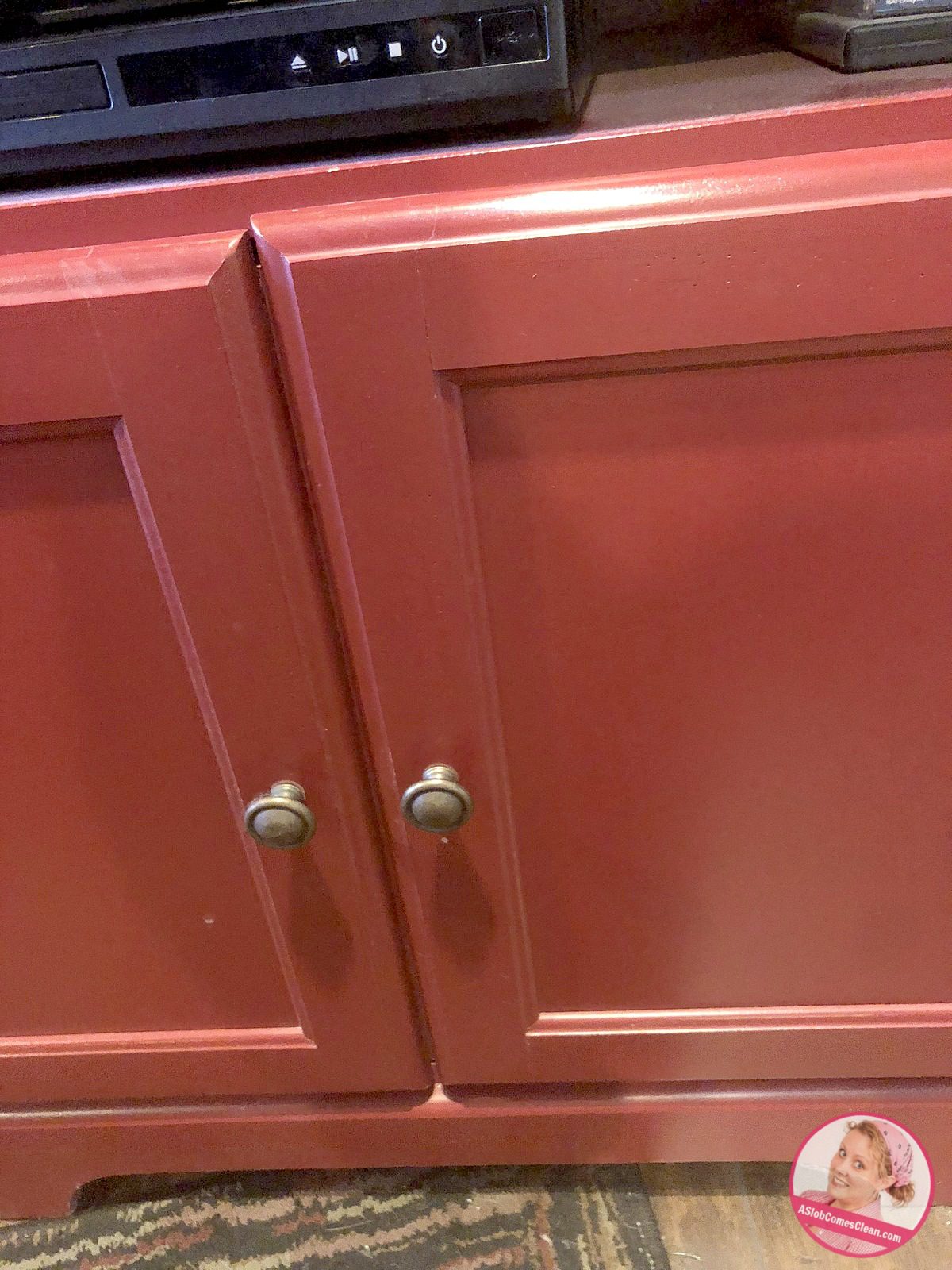 The door closes. So yay for that. The TV cabinet is another decluttering project for another day. As long as its door closes, my home is no worse for having put that box of tapes in there, the place where I’d look for them first.

And my home is better off for actually finishing the shelf in the garage.

Back at the shelf, I worked my way through the other things. I had to stop myself from unconsciously,  temporarily depositing a roll of tape on a nearby waiting-to-be-decluttered shelf. 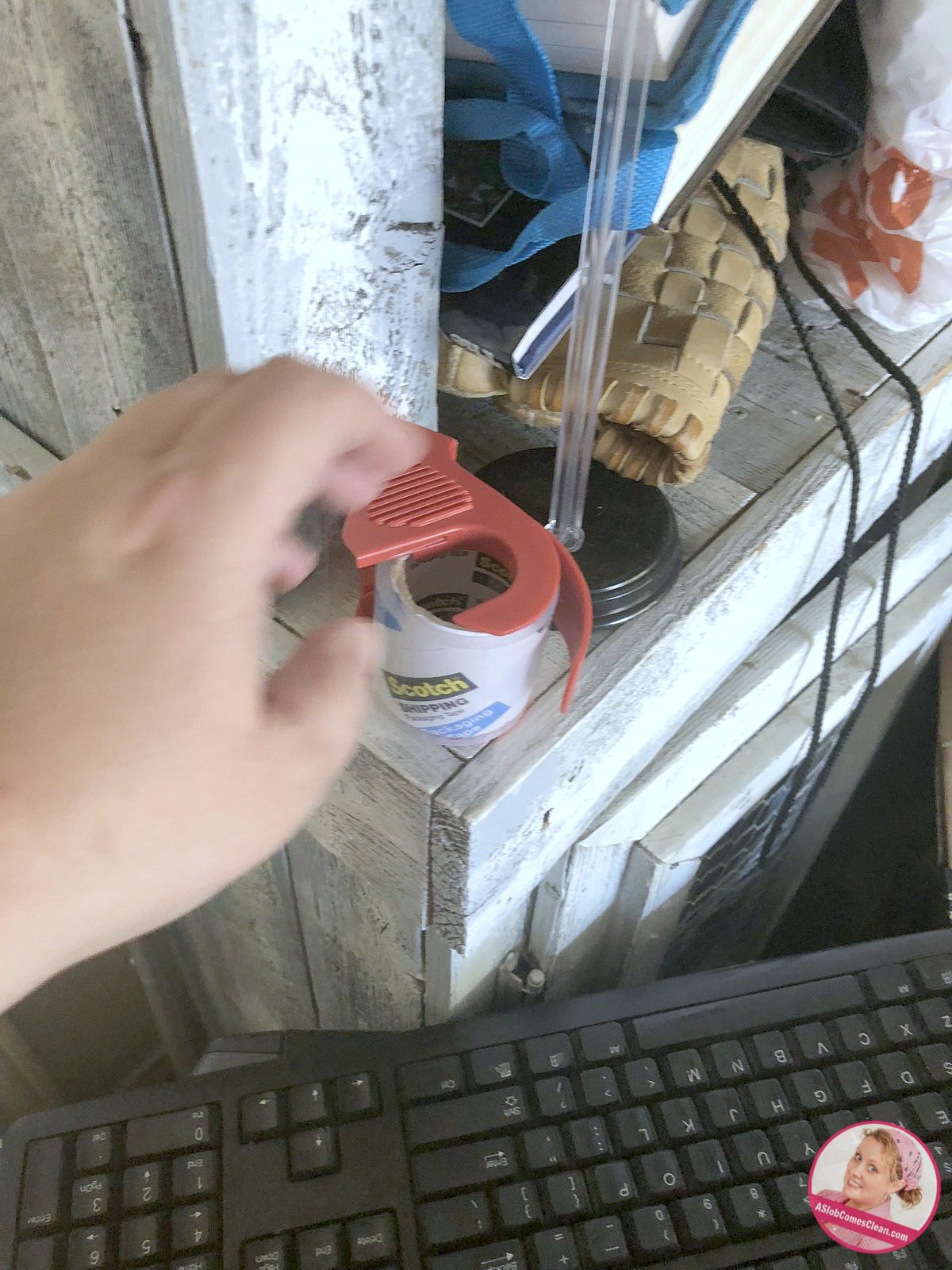 Tape is easy. I’d look for it first in a drawer in the room right by the garage. I took it to that drawer instead.

Finally, I dusted the shelf and painted it.

And my path was clear(er).

While I did lots of different things, each step I took was to accomplish the goal of clearing that specific shelf and therefore clearing the path in my garage. 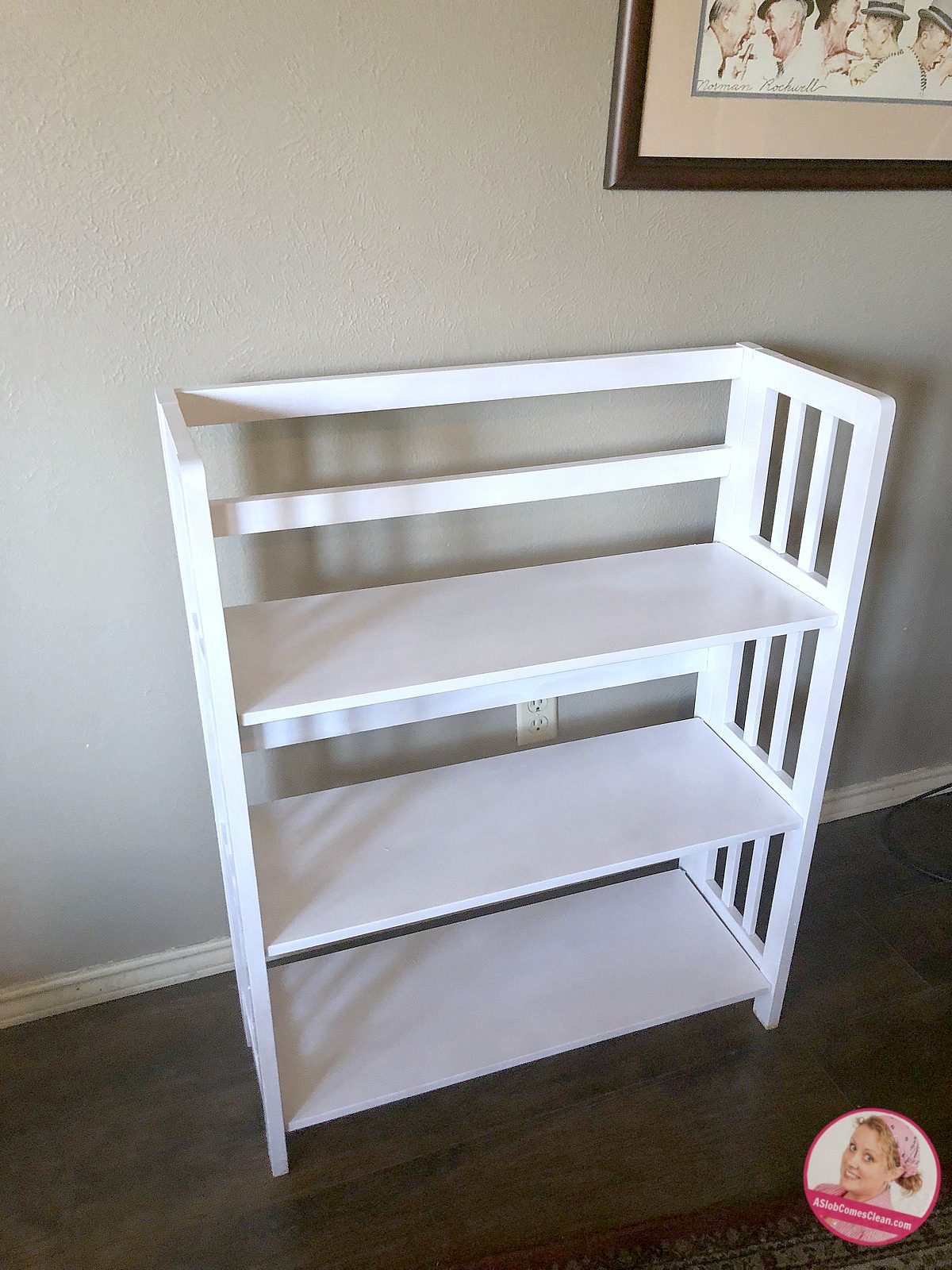 Moving scattered DVDs and photos in the TV cabinet into the red bin? That moved me forward on clearing the shelf.

Putting the blue train case in its home in the living room gave me the space to deposit the face-welt-causing miniature tree. Which cleared the shelf.

This is the difference between decluttering and Stuff Shifting. Except for the noxious mini-tree, everything moved to a home where it could stay indefinitely. Each movement made my house as a whole a little better, with no temporary solutions.

Yes, the TV cabinet will be a project in the future, but it’s no worse off than it was before. It’s imperfect, but not temporary.

It is something to be done, but not something left undone.

Yay for making progress and only progress.

About the miniature tree . . . my friend didn’t want it. Honestly, if I wasn’t a blogger, I probably would have re-gifted it. Alas, I couldn’t re-gift for fear the recipient or her friend reads my blog and would see this post. I should have texted some other friends, but time got away from me. I had to throw it away.

About the VHS tapes . . . we don’t even have a VHS player anymore. But these were memory-laden tapes like the one I made for our wedding rehearsal dinner. They’re a conversion project for the future, but they need a place for now and it needs to be the first place where I’d look for them.

About the dust in the TV stand . . . oh well. Yay for closing doors to hide some of it.

Read Newer Post 203: Cleaning, Decluttering, Tidying, Straightening or Whatever You Want to Call It
Read Older Post 202: Letting People Into Your Home and In On Your Slob Secret