It was a good summer. 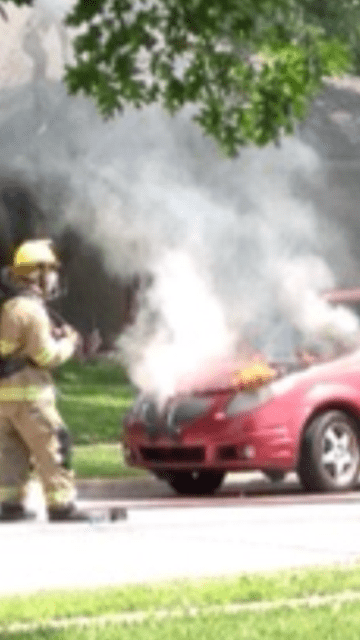 That was the last day of school in June. I was pulling out of my alley, on my way to pick up kids, when my car died. I re-started it. It re-died.

Another re-start. Another death.

Now, here’s where I prove I’m not a car expert. I didn’t even look under the hood. I just assumed something was wrong, very wrong, but since I knew I’d have no idea what I was looking at if I looked, I just texted Hubby and started walking back home.

Yes, I’ve heard the where-there’s-smoke-there’s-fire saying, but somehow that didn’t register as a real thing to me. I just assumed it was a little hot or that something was steaming (I think that’s happened before), but it never even occurred to me that there was an actual fire under there.

By some miracle, Hubby was able to come straight home to give me his car so I could drop him back at work and start the pick-up rounds.

He went to check out the dead car. It was still (much to my surprise) smoking. He popped the hood.

Uhhhhhhh. We called 911 to ask what we should do. They told us they were sending police and firemen right away. Before they got there, the neighbor who was enjoying the show (really, she said it was very exciting!!), went into her house only to learn her fire extinguisher didn’t work.

The police arrived, only to learn their extinguisher also didn’t work. They advised us to move our Suburban away from the (still only slightly burning) car. Y’know, in case it exploded.

That was when things suddenly felt real. Like, maybe this was a big deal after all.

By the time fire was out, everything that mattered was melted. Thankfully, no one was injured.

But this was when I started having not-so-loving feelings toward Dave Ramsey.

It’s me being derogatory, without being as inappropriate as what was actually going on in my head.

I was mad at Dave.

After huge amounts of stress and many Saturdays spent in somewhat scary parts of Dallas, we purchased that car with cash. Like good little Dave followers.

We totally agree that debt is bad. Real, real bad. We have worked very hard to stay debt-free. When we replaced our mini-van with a 10+ year old Suburban for $3,000, we sang Dave’s praises and congratulated ourselves for understanding and acting upon this idea that you can get a used car with cash and be fine.

Just one thing: We have a mechanic whom we love and trust who had a Suburban he whole-heartedly recommended to us. We bought it with confidence.

But this time, we needed a non-gas-guzzling vehicle. Hubby was going to take the guzzling Suburban, and I needed something small to haul the kids around to all their activities and to drive to my speaking engagements.

We had scary Craigslist experiences. We opened cars that reeked of smoke and one that was covered in fuzzy mold on all the seats.

Finding a reliable car that got good gas mileage for less than $6,000 cash was hard. Really, really hard.

But in the end, we found this one and decided we just needed to do it. We’d hemmed and hawed and researched until we wanted to scream.

This one seemed the best and wisest choice.

We paid for the carfax, kicked the tires and drove it home.

For about two months, it felt like we’d made a decent decision.

And then it caught on fire.

Hubby and I agreed we were NOT going to go through that again. We tried. We failed. And y’all, it’s scary when your car catches on fire. For several weeks, I felt panic every time the image of my car on fire on a busy highway crossed my mind.

So we took the money from the insurance and used it as a down-payment on a CERTIFIED, checked-over, still-under-warranty, not “As-Is” car with a small monthly payment that we’ll pay off as soon as we can.

And even though I totally understand the logic of buying cars for cash, I don’t care.

Not even a little bit.

Not that we’re throwing out all Dave-ey goodness. We still agree with most of what he says, even the stuff about buying cars for cash.

We’ve just chosen NOT to follow that advice this time.

Right around the time this was all going on, someone commented on Facebook how she’d liked the page, but the posts she was seeing just overwhelmed her and kind of made her mad. But then one post (can’t remember which one), made sense to her. She made a change, and that change improved her home.

Yay for one change.

It reminded me of the Dave Ramsey/Schmave Schmamsey situation I was going through right then.

I was mad at Dave. I was overwhelmed. Even though I knew paying cash for a car was the ideal, I didn’t want to hear one word about how I should do that.

But we aren’t throwing all his methods out the window. We continue to follow so many great strategies and we’re better off for it.

Not that I’d compare myself to Dave/Schmave, but there are some parallels for those who feel overwhelmed or want to punch the computer screen when I talk about something that’s just too tough to deal with right this moment.

You can hold on to your sentimental clutter or keep your used tissue paper or refuse to try Laundry Day. Really, do what you want to do.

There’s never a week (or even a day) when I do everything perfectly in my own home. But if I do one thing, my house is One Thing Better. If I do the dishes, my dishes are done. If I do a five minute pickup, my floors are walkonable.

Yes. I have strategies that I share for decluttering. I’ve boiled it down to four habits that will make a huge impact.

But if one of those habits makes you think bad thoughts about Nony Schmony, skip it. Do the ones that make sense to you.

Do the ones that make you feel excited about continuing instead of ready to quit.

We didn’t buy a new car. We bought a 2013 Altima. We searched and bargained until we got one for the price we wanted. We did the best we could do at the time while also acknowledging the effects of the trauma we’d experienced.

We didn’t abandon our grocery budget and start charging everything on credit cards. And when it comes time to buy another vehicle, we’ll try to get one with cash on a referral from our trusted mechanic.

So we’re better off. Not perfect, but better.

P.S. Here’s proof we haven’t given up our Ridiculously Frugal Ways: 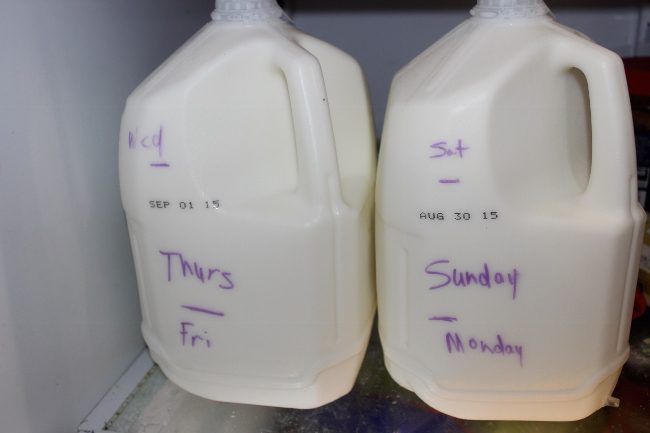 Here’s our “milk budget” that I implemented for my milk-guzzling kids to make it through until payday without going over our grocery budget.