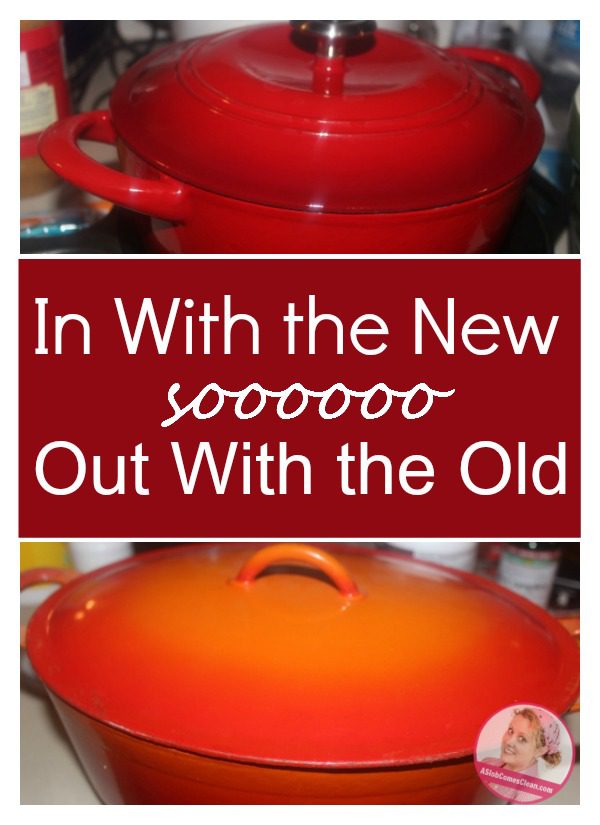 Did you notice my lovely new red dutch oven in this post?

My mother gave that to me for Christmas after I noticed its lovely redness while we shopped together.

It sat in my garage for a month or so until I remembered it when I was making four meals of pot roast for the freezer.

It worked beautifully. Just like the orange dutch oven that my mother used to use.

Except the orange dutch oven wasn’t a memory.

It was shoved in the back of my kitchen cabinet, taking up the room I needed to store my pretty new red one.

Years ago, I sold the rest of that orange Descoware on eBay. I had realized that even though it’s good stuff, I was gravitating toward my newer stuff and it was just taking up space. I kept the Dutch Oven, though, because of its unusual size.

And . . . keeping one piece makes it easier to get rid of sentimental stuff like the set of pots and pans with which you learned to cook.

But in the more-than-10-years since I decided this item was worth keeping, I hadn’t used it.

For some reason, the oval shape kept me from using it on the stove top, and I just never thought about it for things in the oven.

The red one is pretty. And sturdy and large enough to use for all the things I imagined I’d do with the orange one (but never did). And it’s round, so I’ve already used it for more than just roasts.

I don’t need both.

I can’t possibly justify keeping both.

So the orange one now sits in the Donate Box. I’m counting this as a One In One Out.

It still counts, right? Even though I’m replacing an item I never actually use? At least I’m not shoving or stacking building a new cabinet.

Which is totally what I would have done pre-blog.

Read Newer Post Daily Deslobification Blogcast is Now Live!
Read Older Post Give Me a Space and I Will Fill It