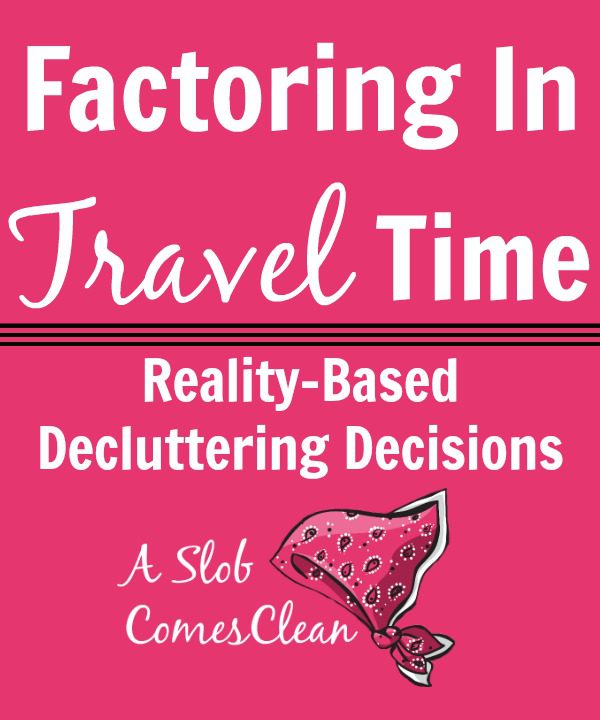 There was no reason to pitch it. No reason at all why I couldn’t re-use it.

And aren’t envelopes (especially big ones) the stuff of dreams? Just imagine filling them with photos or coloring pages or full-sized papers that needed be kept together. Or sending off our tax information to the accountant.

But I’ve learned to factor in travel time.

I tend to be that person who thinks/says “Oh. I totally have time to do that!” while assuming she’s being completely realistic about how her day is going to go.

But then I’m also that person who realizes she didn’t consider travel time.

Run into “town” and go hither, thither and yon?

But getting from hither to thither takes fifteen minutes which makes that five minute errand take twenty minutes. And who has the time to get to yon?? Yon is, like, another 27 minutes in the opposite direction.

I generally have a list of five errands at the beginning of a day, but am lucky if I make three happen.

I also have to factor in the “travel time” of useful stuff that randomly ends up in my possession. Like the envelope. I got it at my kids’ basketball game when my husband asked me to pass out team photos.

But when I looked at it, I realized there was too much travel required between “Oh, look at the pretty free envelope!!” and actually putting it where envelopes go inside my home.

I’d have to hang on to it until the end of the second basketball game. If I wanted to NOT forget about it on the floor, I’d probably need to fold it up and stuff it in my purse. Then, it would no longer be pretty. And would almost certainly become one with all other other trash in there.

Even if I managed to get it to the car, the travel time between the gymnasium and my house would almost guarantee it ended up in the floorboard, ready to be muddied by Kid Shoes and forgotten by Mom Brains.

And even if I managed to get it out of the car and into the house, it would most likely end up on a pile of other randomness and not make it to the Envelope Drawer until a future Decluttering Project. A decluttering project that would likely happen just AFTER I needed the envelope, but didn’t know where it was.

Y’all, one free envelope isn’t worth all that stress.